Silky oak is an agroforestry, timber, ornamental and honey tree originating in Australia, its natural range limited to pockets of subtropical forest on the continent's east coast.

It is a fast-growing tree, to heights of up to 35 m (114 ft) in its natural habitat, though elsewhere, it is more typically 15 to 25 m (50 to 80 ft) tall and develops a straight trunk supporting a pyramidal or rounded crown. The bark is grey-brown and fissured.

Leaves are fern-like, dark green on top, silvery beneath and in a dense arrangement that casts a deep shade. They remain on the tree where the dry season is short but fall where it is long or pronounced, leaving the branches almost bare for a short period, just before flowering.

The flowers are thin, erect, orange-yellow tubes in long clusters that somewhat resemble a brush with bristles. They bloom in perfusion from spring to early summer, with the most striking displays seen on near leafless trees.

Fruit are small, flat, oval seedpods that, when mature, are dark brown to near black with one or two-winged seed inside. 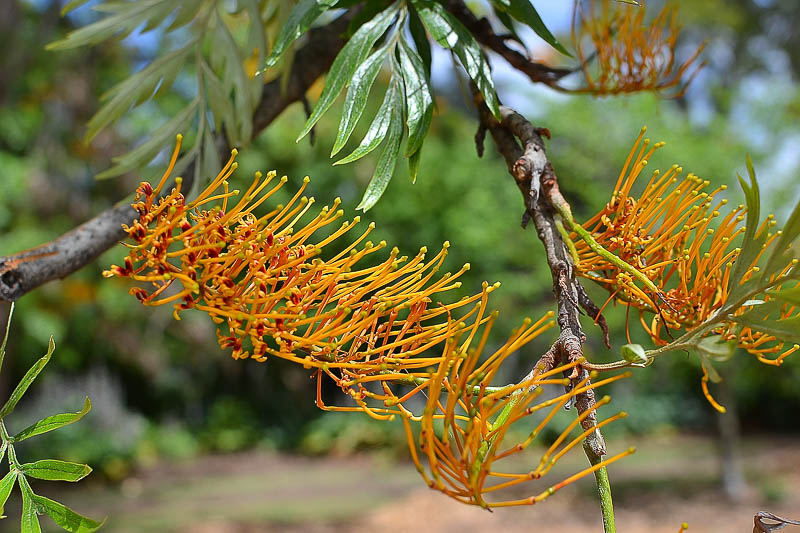 Silky oak is cultivated in gardens, urban landscapes, and parks, especially in Australia, for its spectacular flowering, eye-catching foliage, and the shade it provides.

Introduced decades ago in India, Sri Lanka and Kenya, it is cultivated there as a shade tree, to shade crops such as tea (Camellia sinensis) and coffee (Coffea arabica), because of its fast growth and good adaptation to tropical highland climates. It is also cultivated for fuelwood, including firewood and charcoal, protective windbreaks and honey production.

The flowers produce reasonable quantities of nectar. It is reported as a honey tree in Australia and in countries where it's introduced, including India, Tanzania, Guatemala and the Dominican Republic. The honey is dark amber with a pronounced flavour, dense texture, and quick to granulate to a smooth grain. The nectar also helps to nourish and sustain nectar-eating birds in its native region, making it an important wildlife tree. 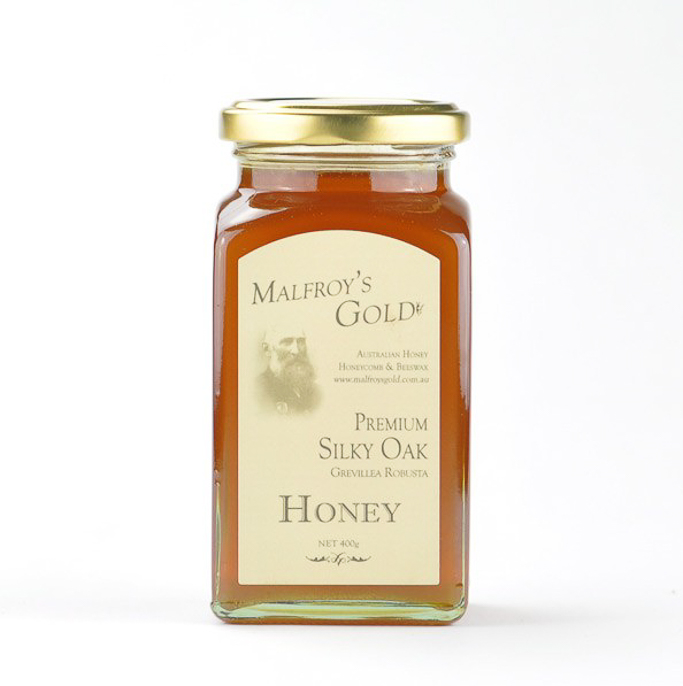 The wood is medium-weight, in the 540 to 660 kgs per cubic meter (34 to 41 lbs per cubic ft) range and has attractively figured pinkish-brown heartwood. It is moderately resistant to rot and decay, making it fit for indoor and some outdoor applications.

Well-formed logs are sawn into planks used mostly for fine furniture, cabinets, interior flooring, interior house trim, doors, window-frames and the like. Selected logs are sliced for decorative veneer and the branch-wood, apart from fuelwood, is used in turnery.

Silky Oak develops a good form in sub-humid to humid subtropical and tropical mid- to high-elevation climates, generally areas with annual lows of 8 to 20°C, annual highs of 19 to 32°C, annual rainfall of 600 to 2400 mm and a dry season of 6 months or less, extending to 12 months with irrigation or groundwater.

Trees may fail to flower, or do so poorly, in extreme high-elevation areas, such as Bogotá (Colombia), Addis Ababa (Ethiopia) and Mexico City, generally areas where the average low of the warmest month is below 14°C (57°F). In Hawaii, the best-developed trees are found in mid-elevation areas with annual rainfall of 1500 to 2000 mm.

New plants are usually raised from seed, which remain viable for up to a year under cold, dry, airtight storage and germinate within thirty days of sowing.

Silky Oak trees perform best on free-draining clay-loam, loam and sandy-loam soils of an acid to neutral nature, generally with a pH of 4.5 to 7.5, and on sites with full to partial sun exposure.

The winged seed are carried over long distances by wind and germinate readily. It has naturalised in many areas where it is introduced and has become an undesirable weed in some parts. In South Africa, it is recorded as a serious invader of the natural ecosystem and in Hawaii as a high weed risk, as assessed by the Hawaii Pacific Weed Risk Assessment (HPWRA) project.

The branches are brittle and prone to breakage in strong winds, potentially causing personal injury or property damage. The flowers, fruit and sap may cause dermatitis in some people, and the fallen leaves create leaf litter.