Camellia sinensis is the source of tea, both black and green, the world's most consumed beverage, made from the plant's fermented and unfermented leaves. Originating in Asia, its natural range extends from northern India through Myanmar (Burma) and Thailand to southern China.

Generally, there are two types or subspecies of tea plants of commercial interest. The large-leafed, heavy yielding Camellia sinensis var. assamica, originating from the foothills of the Himalayas, and Camellia sinensis var. sinensis from southern China, with smaller leaves and lower yields but whose teas are considered the more flavoursome.

It may be an evergreen shrub 3 to 5 m (10 to 16 ft) tall or a small tree up 15 m (50 ft), depending on the type and variety, of which there are hundreds. However, it is usually kept 1 to 1.5 m (3 to 5 ft) tall in commercial operations to facilitate harvesting the leaves, a task still done mostly by hand.

Leaves are elongated oval with a pointed tip, 4 to 15 cm (2 to 6 in) long, finely serrated on the margins, embossed, light glossy green when they emerge, becoming darker green. They are alternately and densely arranged along the branches and remain on the plant in all seasons.

Flowers are five- to seven-petaled, white, less commonly pale pink, with yellow centres, up to 4 cm (1.5 in) wide and sweetly fragrant. They arise singly or in groups of up to five at the leaf axils and bloom in the year's cooler months, from late autumn through to spring.

Fertilised flowers develop into round, lobed fruit about 2.5 cm (1 in) in diameter. Green when young, they become green-brown and woody when mature and consist of up to four separate cells, each containing one to four dark brown, roundish seed. 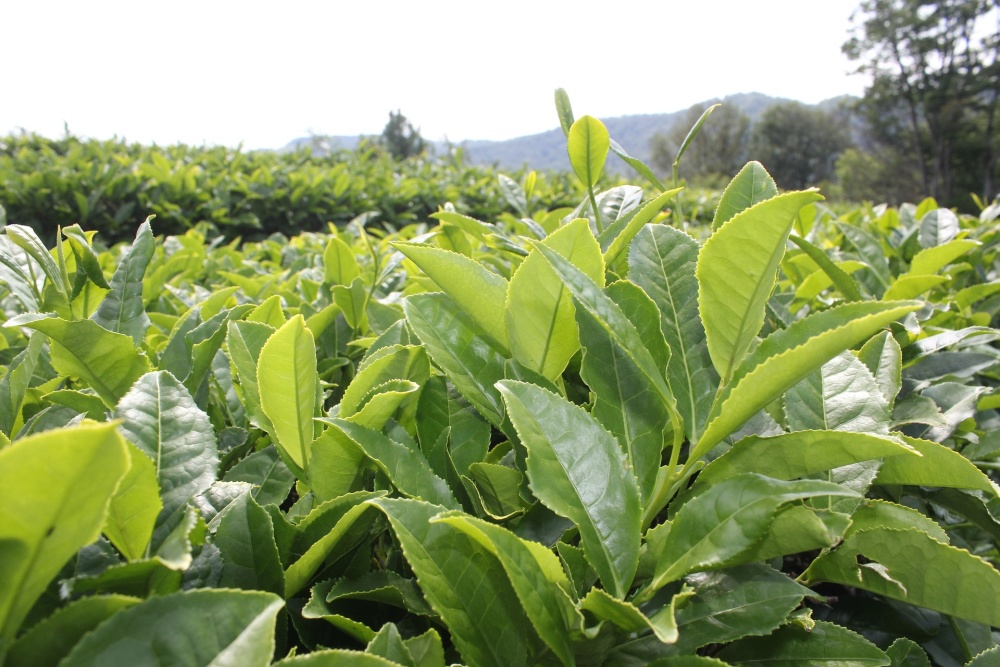 Tea is made from the young leaves and, depending on the post-harvest process, may be black, green, or oolong tea, though there are also niche or minor teas produced, such as white and yellow tea. Only the young leaves are harvested because they are the most flavoursome and contain the greatest amount of caffeine and catechin, a naturally occurring antioxidant.

About 78% of the tea produced and consumed worldwide is black tea, 20% is green tea, and 2% is oolong and other teas.

Making black tea starts with withering, traditionally a process by which the harvested leaves are spread thinly on racks under shade to wither or lose some of their moisture. In commercial operations, this is achieved by continually passing air over the leaves in a controlled, dehumidified environment, a process needing much less time and space than rack drying.

Once withered, the leaves are ruptured using a mechanical process known a rolling. Rolling liberates enzymes in the leaf, which naturally brings about fermentation (oxidation) in the presence of air, causing the leaves to change colour from green to black and develop flavour. After fermentation, which lasts for a few hours, the leaves are dried, sifted, graded, and then packed as loose-leaf black tea or in teabags.

For green tea, fermentation is skipped or prevented by quickly steaming or roasting the leaves after harvest to kill the enzymes. Because no fermentation occurs, the leaves retain their green colour and catechin content, up to 90% of which may be lost when producing black tea.

Oolong tea is fermented, similar to black tea, but the fermentation time is shorter. Depending on the length of fermentation, its colour varies from dark green to light brown, lying somewhere between green tea, which is light green, to black tea, which can range from dark brown to black.  Scented teas, for example, 'Pouchong', are made by mixing Oolong tea with aromatic flowers such as those of Jasmine (Jasminum officinale) and Arabian jasmine (Jasminum sambac).

Freshly brewed tea has a pleasingly astringent, slightly bitter flavour, a cooling effect on the body and acts as a stimulant due to its high caffeine content.

Black tea is brewed and consumed worldwide and in many forms, from hot, sweet and milky to cold and flavoured with lemon and mint. It is also used as a flavouring agent in chilled dairy desserts, baked goods, confectionery, puddings and alcoholic drinks. And in its dried form to smoke foods, for example, when making tea-smoked duck.

Spiced, milky black tea, known in the west as 'Chai' or 'Chaay' (the Hindi word for tea), with its flavourings of Clove (Syzygium aromaticum), Cardamom (Elettaria cardamomum) and Cinnamon (Cinnamomum verum), has recently become a popular hot beverage in cafes worldwide.

Green tea is consumed mainly in China and Japan, where its preparation and consumption also holds ceremonial significance. It is usually brewed and drunk in its purest form without adulteration from sweeteners or other additives. Probably due to reports of its antioxidant activity, it has started appearing in various products, including cosmetics, supplements sold in health food shops, smoothies and ice cream, usually marketed as 'Matcha' or 'Matcha green tea'.

The seed contains about 20% of a non-drying, edible oil known as 'Teaseed oil', with physical properties closely resembling Olive oil (from Olea europaea). However, the principal source of Teaseed oil is the seed of Camellia oleifera, a close relative. Teaseed oil has been used for making soap, as a lubricant, as a textile oil by the silk industry, and, after refining, as a salad and cooking oil. 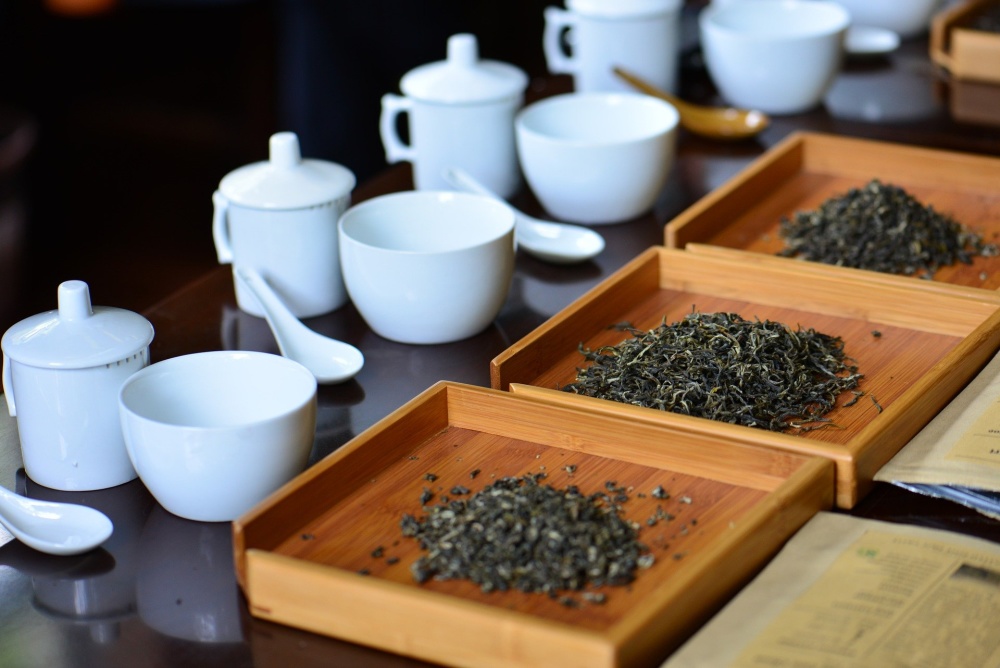 The leaves are rich in antioxidants, useful in preventing some diseases, and have diuretic activity, increasing the amount of urine. They also contain high levels of Vitamins B1 (Thiamine), B2 (Riboflavin), B3 (Niacin), B6 (Pyridoxine) and C (Ascorbic acid).

Grows naturally and produces quality leaves in humid tropical, subtropical and temperate climates, generally areas with annual lows of 8 to 25 °C, annual highs of 17 to 30 °C, annual rainfall of 1200 to 5000 mm and a dry season of 4 months or less, extending to 6 months with irrigation.

Tea plantations in Sri Lanka mainly cultivate var. assamica and are concentrated in the island's humid central and western regions, at elevations from near sea level to 1800 m (6000 ft). Generally, areas where the average low of the warmest month ranges from 13° to 26° C.

New plants can be grown from seed, which remain viable for up to three weeks. However, cuttings are preferred because tea plants readily cross-pollinate, producing seedlings with variable growth rates, vigour and leaf quality.

New shoots with three to four leaf nodes make excellent cuttings and are best taken on cool, overcast days to minimise water stress. Cuts are made below the bottom leaf node, leaving about 3 to 4 cm (1.2 to 1.5 in) of semi-wood exposed at the cut end. This end is then immersed in a container with a free-draining, moderately acid potting mix (ideally with a pH around 4.5 to 5), and the plant is tended in a nursery until it takes root and becomes established.

Tea plants have their best survival and development when planted out at the start of the rainy season and in loosely prepared soil, usually in pits dug and enriched with organic matter, such as compost and well-rotted manure. Mulching is also commonly practised to keep the young roots cool, moist, prevent soil erosion and suppress weeds.

Performs best on deep, fertile free-draining clay-loam, loam, sandy-loam and loamy-sand soils of a moderately acid nature, generally with a pH of 4.5 to 5.5, and on sites with light shade exposure. Tea is an understory plant and is accustomed to the shade of trees growing above it. In commercial plantations, it is usual to plant it under lightly canopied, fast-growing trees such as Silky oak (Grevillea robusta), Pink cedar (Acrocarpus fraxinifolius) and Fragrant albizia (Albizia odoratissima).

Harvesting starts three to five years after planting, and a plant's useful life may exceed fifty years under good care. However, thirty years is the more usual lifespan of a plant in commercial plantations.

For good quality tea, only the young succulent shoot tips with two or at most three leaves are harvested, and a plant is harvested once each week. This near-constant harvesting facilitates keeping the plant from growing too tall and the leaves within easy reach for hand-plucking.

Yields vary widely among varieties, locations (climates and soil types) and production methods. Reports are that yields in commercial plantations range from 400 to 3,500 kg of finished tea per hectare per year (356 to 3,122 lbs per acre per year). 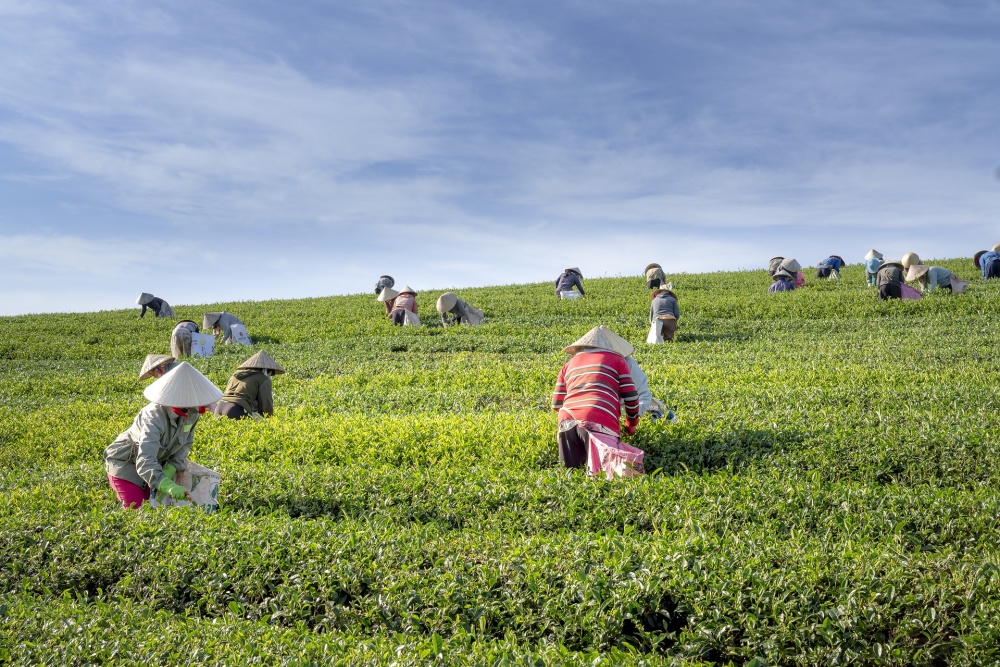 The fruit mature around nine to twelve months after fruit-set, after which they fall to the ground and break open, scattering the seed.

Camellia sinensis has been recorded as having escaped cultivation and a weed of the natural environment in Australia. Still, it is assessed as a low weed risk species for Hawaii by the Hawaii Pacific Weed Risk Assessment (HPWRA) project.