Coconut is one of the world's most important and versatile plants and is believed to originate from the geographic region extending from the Philippines, through Papua New Guinea and Indonesia, to northern Australia. Nowadays, it is widely cultivated and has become naturalised in almost all, if not all, tropical countries worldwide.

The flowers are small, pale yellow and are borne on large, branched flower stalks, the female and male flowers on separate branches of the same stalk. Coconut palms bloom all year round, except when they are stressed by cold or lack water, as is common in areas with a pronounced dry season.

The fruit are egg-shaped, large and heavy, with a thick, tough, fibrous exterior enclosing the nut, which is round with a hard shell protecting the flesh and water. The fruit develops from the fertilised female flowers, growing in clusters at the top of the palm. When young, they are green or in dwarf varieties yellow-orange, becoming brown when mature at around ten months after fruit-set, then self-detach and fall to the ground where they land with a thud.

The young fruit contains coconut water, which is a sweet, refreshing and nutritious drink. It is accessed by cutting open or boring a hole through the fibrous exterior and hard inner shell. After drinking or draining the water, the coconut is split in two to access the soft, jelly-like flesh, which can be scooped out and eaten.

As the coconut matures on the palm, the flesh hardens, and its oil content increases. As this happens, the dry matter content of the water decreases, along with its nutritional value.

The flesh of the mature nut yields coconut cream and milk, which are widely used in both savoury and sweet dishes, including curries, rice dishes, custards, confectionery, as well as alcoholic and non-alcoholic drinks. Coconut cream and milk are made by finely shredded or grating the mature flesh, mixing it with water and then pressing and straining it through a sieve or cloth. The first-pressing yields the cream and subsequent pressings the milk.

The mature flesh also yields up to 65% of edible oil that solidifies at temperatures below 25°C (77°F). The oil is extracted by cold pressing the mature, dried flesh or boiling the milk and skimming off the oil, a more traditional, home-based method.

Coconut oil is used in cooking, especially for frying. It is also widely used in the manufacture of margarine and as a confectionery fat, mainly as a substitute for cocoa butter (from Theobroma cacao). More recently, it has found use as a substitute for beef fat in plant-based meats, particularly vegan burgers, such as those created by Beyond Meat and Impossible Foods. The oil reportedly melts similar to beef fat, giving beef fat-like juiciness to the plant-based burgers.

Coconut oil is also commonly used in cosmetics, including soaps, particularly baby soaps, shampoos, hairdressings, skin care lotions, pre-shaving lotions and shaving lathers. It has also been tested successfully as a bio-diesel. The leftover seed cake has a protein content of about 20% and a residual oil content of about 6%. It is a common ingredient in commercial livestock feeds, including some fish feeds.

Coconut flour is a high protein, high fibre, gluten-free flour made by finely milling (or grinding) the dried, mature flesh after the milk or oil is extracted. It is generally suitable for mixing with other flours in baking. Other coconut-derived products include desiccated coconut, made by shredding the white part of the dried flesh, and coconut chips, made by thinly slicing the dried flesh. Both have everyday use in adding coconut flavour and texture to baked goods and confectionery.

Coconut extract or essence, a coconut flavouring, is made by soaking the thoroughly dried grated or diced flesh in an unflavoured colourless alcohol, such as vodka, for at least four weeks (preferably in a sealed glass jar shaken once a day and stored away from sunlight). It can be kept over a long period and adds coconut flavour to food, mainly baked goods and drinks. It is found for sale in supermarkets, usually in the baking products section.

Sap collected from tapped flower stalks is slowly boiled and reduced into palm sugar or is fermented naturally to produce coconut vinegar or 'Toddy', an alcoholic beverage. On a commercial level, the sap and the nectar from the flowers are fermented and distilled to make 'Arrack', an alcoholic spirit sold under different brand names in the region.

Coconut jam or Kaya jam, as known in Southeast Asia and beloved in the region, is made by combining the sweet sap with coconut milk, eggs and pandan extract (from Pandanus amaryllifolius). It is spread on toast and buns eaten for breakfast.

The flowers are a major source of nectar and pollen, providing honeybees with year-round forage in many areas and almost continuous honey production for beekeepers. The honey is described as white to colourless when pure or greenish-yellow when adulterated, thin, with a pleasant flavour, and starts to granulate after around three months. Yields vary considerably, with the highest yields coming from coastal areas, where yields of up to 80 kgs (176 lbs) per colony per season have been reported.

Activated charcoal is made from the hard brown shell of mature nuts after the flesh is removed. It is a specialist charcoal used in air filtration systems and the precious metals industry. The shell is also shaped and polished into pieces of wearable jewellery and other artisan craft.

Coir, a natural fibre stripped from the husk, has long been woven into rope, cordage and mats, including doormats. It is a choice ingredient in potting mixes for plants that require a light, quick-draining root mix, such as orchids. Pieces of husk not made into coir are used as mulch, sometimes as a growing medium, such as when growing Anthuriums (Anthurium andraeanum) for cut-flowers. The husk can also be shaped into a floor-polishing brush and is widely used as kindling for starting fires.

The trunk produces a lightweight to heavy wood in the 100 to 900 kgs per cubic meter range. Still, it is low in natural resistance to decay and rot, which limits its use outdoors. The stem's outer portion of the bottom 6 m (20 ft) has the highest wood density. It is sawn into planks used chiefly for interior flooring, usually laid in a parquet pattern. The finished wood is brown to dark brown with decorative grain, wears well and takes on a good polish.

The leaves are used in basketry and other woven craft, including sun hats, floor mats, privacy screens and packaging for food and gifts.

Coconut palms are mostly planted in coastal areas as a windbreak and to minimise soil and sand erosion. Their graceful, iconic form also contributes to the tropical feel of any garden or landscape. 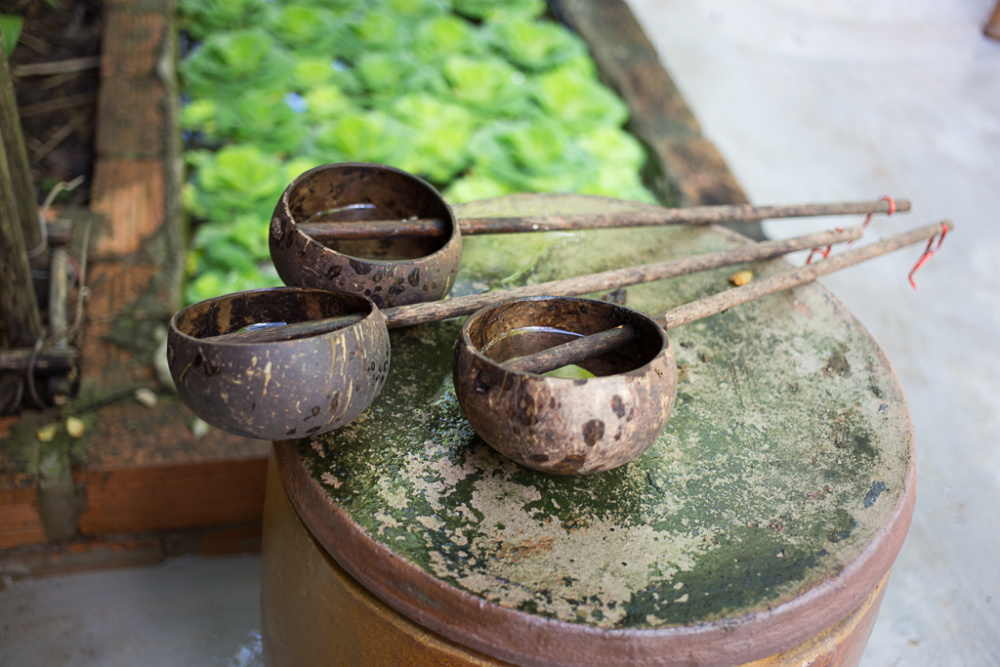 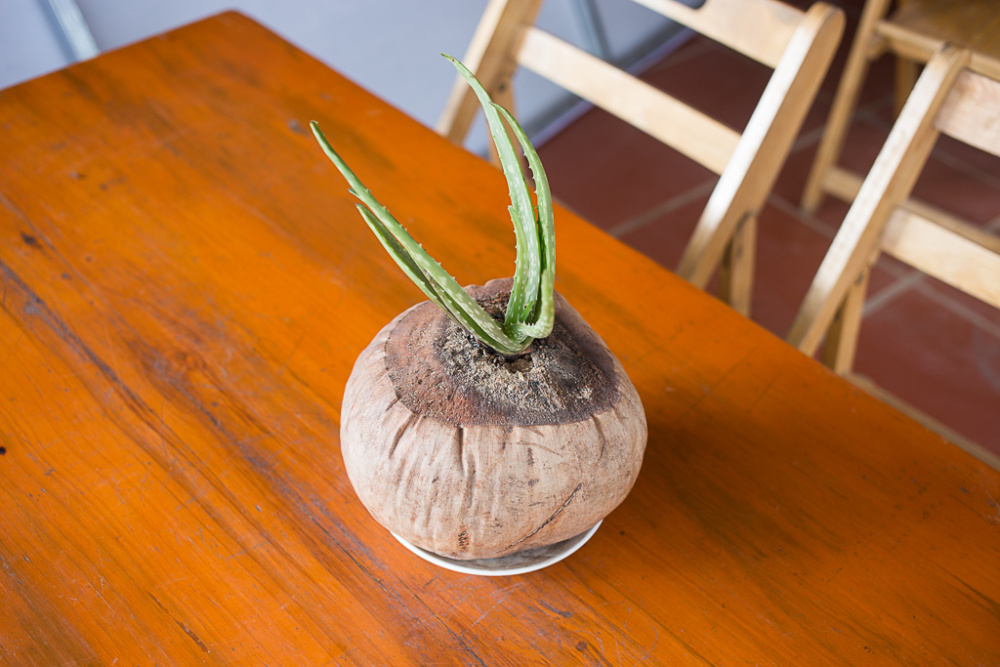 The oil extracted from the flesh of mature nuts is a good source of energy. It is also reported to contain reasonable amounts of Vitamins B1 (Thiamine), B2 (Riboflavin), B3 (Niacin), B6 (Pyridoxine), C (Ascorbic acid) and E, as well as Folate, Iron and Phosphorus.

Coconut oil is widely used in beauty and skincare products, particularly soaps, shampoos, skin creams and moisturisers. It is also used as a massage oil and hair tonic, particularly in India and Southeast Asia.

Coconut water, from the young fruit, is taken as a kidney tonic in the Caribbean and is prescribed in traditional medicine in India to treat urinary problems. It is reported to contain significant amounts of Potassium, up to 3 grams per litre or close to 100% of the daily recommended intake for adults.

Coconut palms grow naturally and produce quality fruit in humid tropical lowland climates, generally frost-free areas with annual lows of 18 to 25°C, annual highs of 27 to 35°C, annual rainfall of 1200 to 4500 mm and a dry season of 5 months or less.

Palms may flower and fruit poorly, or not at all, in areas with cool winters. And they are more susceptible to disease in dry, sub-humid or very humid climates, generally areas with annual rainfall outside of the 1200 to 4500 mm range or with a pronounced dry season.

However, coconut palms are productive in areas with a pronounced dry season if the roots have access to groundwater, such as in parts of Mumbai, in India. And they do equally well in areas with annual rainfall of less than 1200 mm if irrigated, such as in Salalah, Oman, on the Arabian Peninsula, and in Coimbatore in Tamil Nadu, India, which receives on average only around 600 mm of rainfall annually.

It performs best on free-draining loam and sand soils of a moderately acid to alkaline nature, generally with a pH of 5.5 to 8.0 and on sites with full sun exposure. It has good tolerance to wind, salt spray, soil salt and periodic flooding. Still, it is intolerant of slow-draining or waterlogged soils.

Coconut palms start flowering and producing coconuts at around three to four years old. A mature coconut palm can produce up to one hundred coconuts per year. Yields begin to decline when the palm is over thirty-five years old.

The young and mature fruit are buoyant, helped by their fibrous, waterproof husk and air trapped in the nut cavity. This enables their dispersal over long sea distances to new shores where they may eventually become established. However, this dispersal is limited to coastal areas, and human intervention is needed for inland dispersal.

The Hawaii Pacific Weed Risk Assessment project (HPWRA) assessed it as a low weed risk species for Hawaii. Still, it is discouraged from planting in South Florida.