Scented Pandan is a perennial herb originating in Sri Lanka and Southeast Asia, where its leaves have long been used to scent and colour local dishes.

Like other Pandanus, it develops a slender, semi-woody stem topped with a crown of long sword-shaped leaves and may reach heights of up to 8 m ( 26 ft) if left unmanaged. Plants in the home garden are kept between 0.5 and 1.5 m (1.6 and 5 ft) by repeatedly harvesting the leaves.

The stem is light brown and marked by leaf scars but is hardly visible in young plants, having not yet developed. It is spirally wrapped by the leaves, which are dark green, sword-shaped and up to 1 m (3 ft) long. As the plant ages, the stem grows taller and upright, lifting the leaves high above the ground. At the same time, aerial roots arise along the length, and those near the base grow stilt-like, anchoring the plant in the soil.

Scented Pandan is not known to flower and fruit in cultivation and instead regenerates from root suckers.

Scented Pandan is a commonly cultivated plant in Southeast Asia, India and Sri Lanka for its leaves, which are harvested when young and used to impart their sweet, musky, somewhat nutty aroma to dishes. They are mostly added to steamed rice, curries, and desserts, particularly those incorporating coconut milk.

Usually, one or two leaves are tied in a knot and added to the rice water, curry sauce or dessert mixture at the start of the cooking process. Then when the cooking is finished, they are removed and discarded. In Thailand, the leaves are also used to wrap pieces of marinated chicken or fish into parcels, deep-fried (or first steamed and then deep-fried) and then served with a spicy dipping sauce.

A green food colouring is made by cutting and crushing or blending the leaves with water. It has everyday use in colouring cakes, jellies, and puddings served in bakeries and sweet shops in India and Southeast Asia.

Scented Pandan is sometimes planted in garden beds as a groundcover or fragrant border. 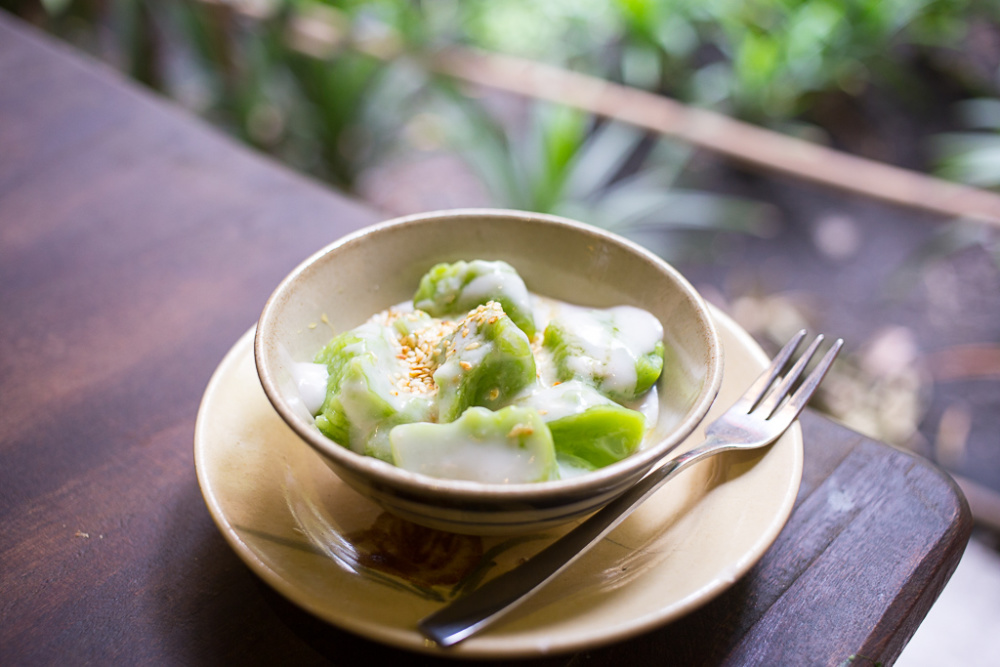 Pandanus is planted as a cockroach repellent in Southeast Asia and particularly Singapore. Some evidence to support this comes from a research study evaluating the action of different essential oils in repelling the American Cockroach (Periplaneta americana), published in the Journal of Agricultural Technology Vol. 9, no. 6 (2013): pp 1613-1620.

The study found, however, that although pandanus leaf oil provided 57% repellency, it was not as effective as the essential oils of Tumeric (Curcuma longa), Cinnamon (Cinnamomum verum), Ginger (Zingiber officinale) or Clove (Syzygium aromaticum), which provided 100% repellency against the American Cockroach.

Grows naturally in humid subtropical and tropical climates, generally in areas with annual lows of 18 to 25°C, annual highs of 27 to 35°C, annual rainfall of 1200 to 5000 mm and a dry season of 6 months or less.

Scented Pandan can also be grown in pots or containers in cooler climates if it can be moved indoors when temperatures fall consistently below 15°C (59°F).

New plants are usually started from cuttings, suckers or divisions, as seed are not normally produced. Tip cuttings work well and are set in a coarse sand mixture in the shade to develop roots before replanting. Suckers and divisions taken from established clumps can be replanted directly.

Performs best in rich, free-draining loam and sand soils of a moderately acid to slightly alkaline nature, generally with a pH of 5.0 to 7.5 and on sites with full to partial sun exposure.

It has escaped cultivation in Singapore, probably due to its suckering habit causing localised spread. Still, there does not appear to be any record of it anywhere as a serious weed or invasive species.