Cacao is a small tree whose fruit are the source of chocolate, one of the world's most beloved and craved foods. According to botanists, cacao originates from the Amazon rainforests of South America, but its range expanded, even before Columbus arrived, to other parts of tropical America, extending as far north as the Yucatan peninsula in Mexico.

Cacao thrives in perpetually humid, equatorial forest environments and is an understory tree, accustomed to the shade of taller trees growing above it. It may attain a height of up to 20 m (33 ft) in the wild, though it is typically 4 to 10 m (13 to 33 ft) tall in cultivation with a slim, straight trunk. The bark is smooth, dark brown, and often mottled by lichens, mosses and algae, which thrive in the shade and humid conditions where the tree grows. Branching starts low on the trunk and is wide-spreading, forming first a pyramidal, then a rounded canopy.

Leaves are elongated-oval, pointed at the tip, 20 to 60 cm (6 to 18 in) long and ribbed on the surface. They emerge pale green, pink or purple, become dark glossy green and are arranged alternately along the branches, where they remain in all seasons.

Flowers are small, five-petaled, creamy-white, yellowish or pink and perfect, having both female and male parts. They are borne individually or in clusters of a few on the trunk and older branches, a botanical curiosity known as cauliflorous flowering. Blooms are encouraged by rising humidity, brought on by the transition from the dry to the rainy season. In areas with two rainy season events a year, flowering and fruiting usually follows each event. Where the climate is perpetually wet or humid, flowering is intermittent to continuous.

Fertilised flowers develop into oval fruit, 10 to 30 cm (4 to 12 in) long, with five or more longitudinal furrows and a blunt to sharply pointed end. There are many varieties of cacao, with fruit that vary in size, shape and colour, ranging from green to yellow, orange, red and purple when fully mature. They have a thick, tough, fleshy rind that encloses twenty to sixty seed neatly arranged in five rows, each covered in a sweet, juicy, white pulp. The seed are dark brown or purplish, oval, and up to 4 cm (1.5 in) long. 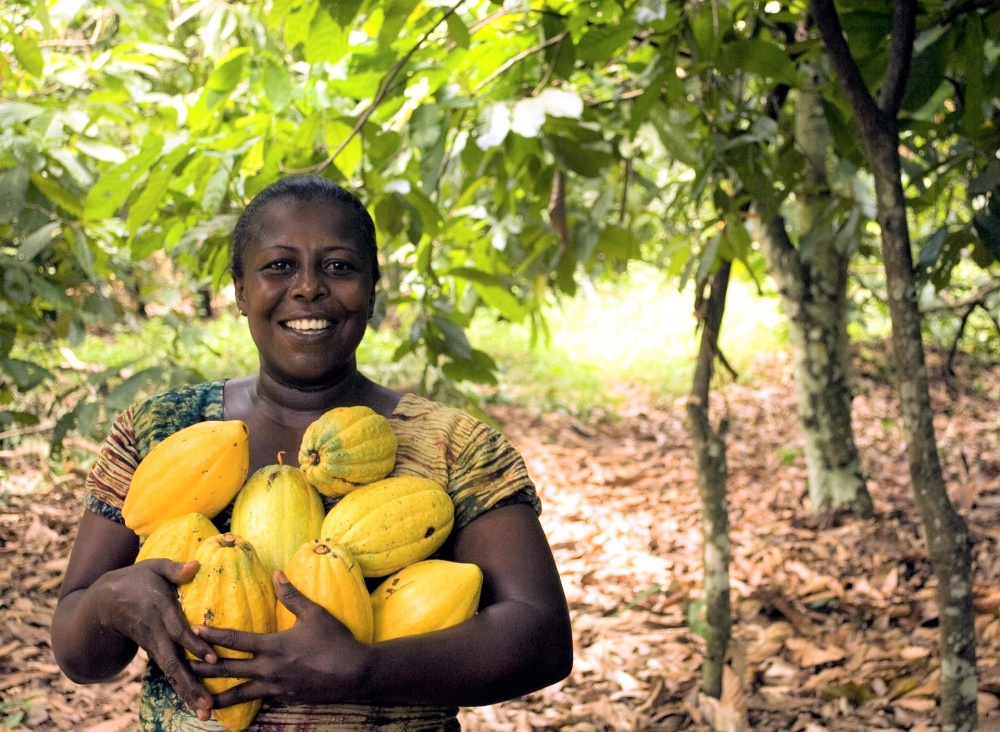 Chocolate production starts with the ripe cacao fruit, known as cacao pods. After harvest, they are split open, the beans extracted and piled into heaps to ferment. The heaps are then covered, traditionally with banana leaves, to retain the fermenting heat. Then every couple of days, they are stirred to promote even fermentation, which completes after about six days. Fermentation is essential to producing quality chocolate as only properly fermented beans develop a full chocolate flavour.

After fermentation, the beans are dried in the sun or artificially (using forced-air dryers) to reduce their moisture content from around 50% to 7%, making them stable for storage and transport.

At the chocolate factory, the beans are roasted, shelled and then ground into what is referred to as 'cacao mass' or 'cocoa liquor', the first liquid stage of the process. Liquification is caused by the beans releasing their fat, commonly known as cacao butter.

Cacao (cocoa) powder is made by removing some cacao butter from the cacao mass and then drying and powdering it. Cacao powder is used mainly in baked goods, such as chocolate cake and pastries, and in powdered drinking chocolate.

Chocolate is made by mixing the cacao mass with sugar and extra cacao butter and then smoothing the mixture using a mechanical process known as conching. Conching removes any grittiness from the chocolate, resulting in a silky-smooth end-product.

Pure chocolate has a bitterish flavour, which is made more agreeable by adding sugar and, depending on individual tastes, milk. However, it is the cocoa butter that sets chocolate apart from other confectionaries. It has a melting point close to body temperature, creating an unmatched melting mouthfeel that makes eating chocolate a sensory delight.

Cocoa butter is solid yellowish fat whitening with age, usually brittle below 25°C (77°F) and with a melting point of 31 to 35°C (88 to 95 °F). It has an agreeable aroma and bland, chocolate-like taste and is used extensively in the manufacture of chocolate-based products and to some extent in cosmetics and pharmaceutical preparations. It is an expensive fat, which led to the search for other edible fats suitable as extenders or replacements, usually referred to as Cocoa Butter Equivalents (CBE's).

Most chocolate is eaten as a sweet treat, for example, in chocolate bars and as dark or milk chocolate, either pure or mixed with other ingredients, including nuts, fruit and an uncountable number of other ingredients.  Chocolate is also commonly melted and incorporated in cakes and pastries, desserts, drinks both hot and cold, savoury dishes and sauces, including 'Mole', a traditional Mexican sauce made by blending chocolate with chillies, onions, garlic, nuts and spices such as cinnamon (Cinnamomum verum), cloves (Syzygium aromaticum) and allspice (Pimenta dioica).

Creme de cacao is a clear or dark brown coloured vodka-based liquor flavoured with cacao beans and vanilla (Vanilla planifolia). It is incorporated in fancy alcoholic cocktails and desserts as a flavouring.

Pacha de Cacao is a delicious juice made using excess pulp from around the beans. It is a cloudy juice with a tropical flavour reminding of pineapple, lychee, citrus, peach, pear and honey.

As a solid fat stable at room temperature but melting at body temperature, cocoa butter is used in cosmetics for its skin softening and lubricating qualities in products such as lipsticks, skin creams, rouge, nail whiteners and soaps. 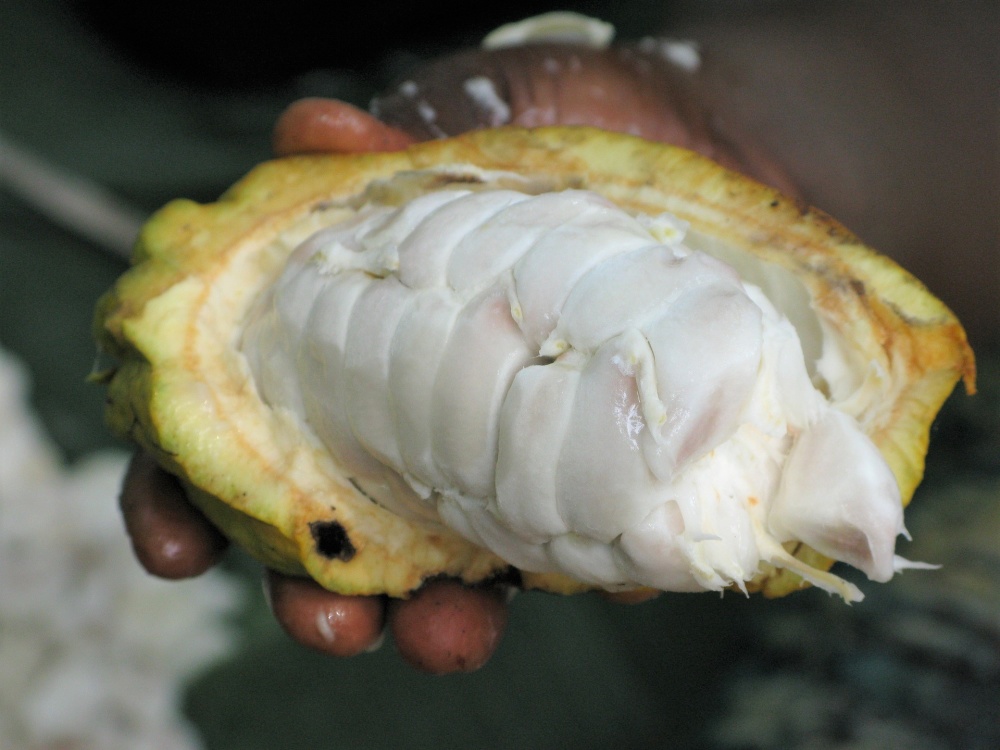 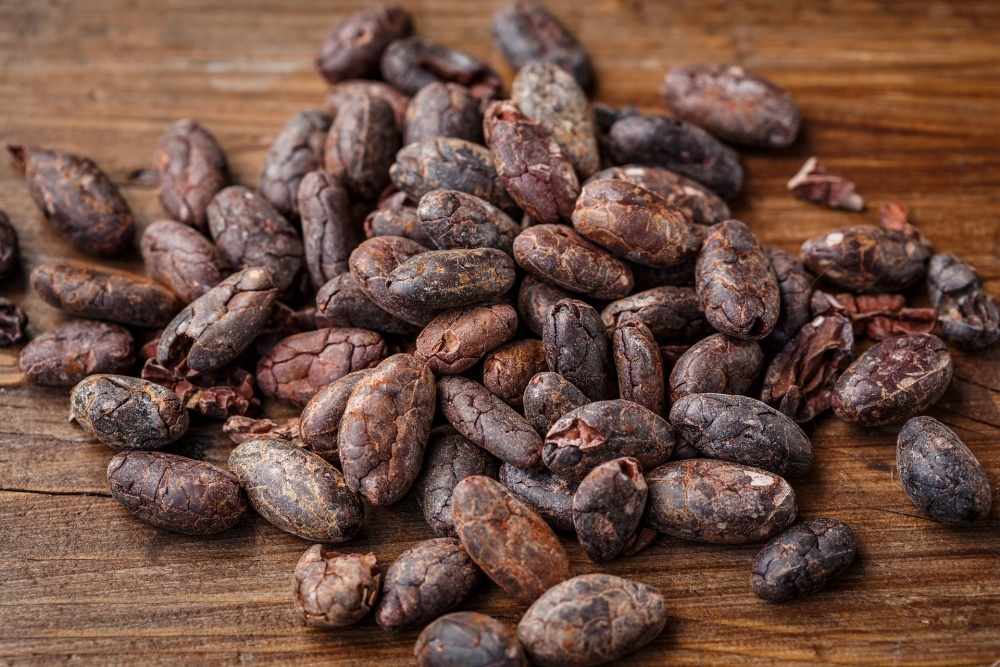 Photo by gate74 from Pixabay 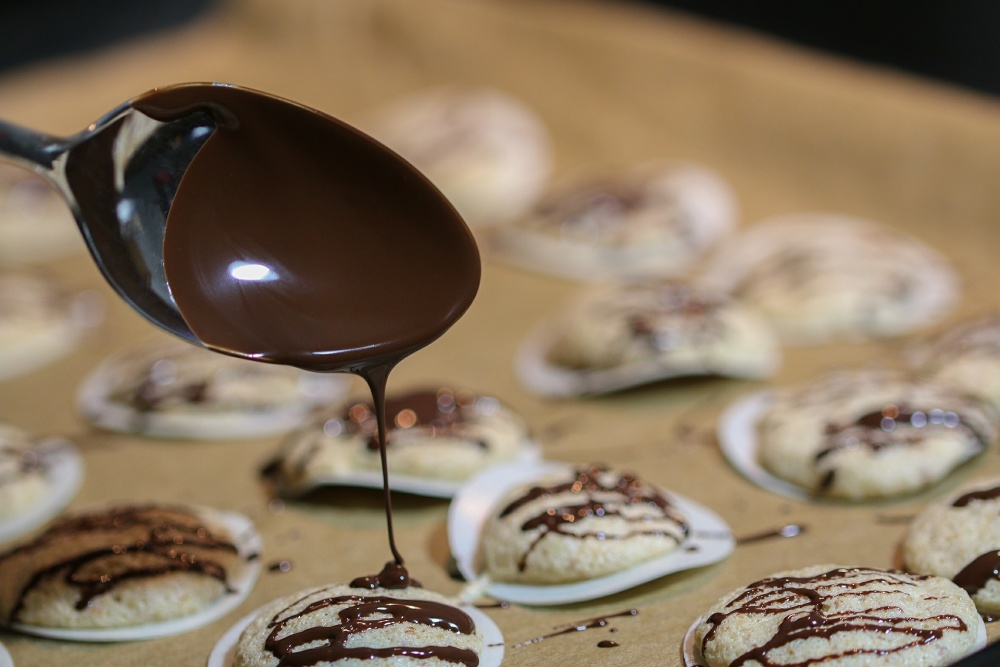 Photo by designerpoint from Pixabay

Cocoa butter is used in ointments and suppositories as a base to carry other medicines.

Cacao grows naturally in humid tropical climates, generally frost-free areas with annual lows of 18 to 25°C, annual highs of 27 to 35°C, annual rainfall of 1200 to 4000 mm and a dry season of 3 months or less, extending to 6 months with irrigation or groundwater (such as in the Yucatan, Mexico).

Cacao may fail to thrive in areas where the average low of the coldest month is below 15 °C (59 °F).

New cacao plants can be started from seed or cuttings. However, seed raised plants are highly variable in yield, disease resistance and other characteristics. More reliable results are to be had from cuttings. These are usually taken from recently matured flushes on selected trees and should have around five to seven leaves and stems that are green but hard. They are placed cut-end in a free-draining potting mix, tended in a nursery and should be ready for planting out in around six months.

Performs best on deep, fast-draining, organically rich clay-loam, loam, sandy loam and loamy-sand soils of a moderately acid to neutral nature, generally with a pH of 4.5 to 7.5, and on sites with light shade to partial sun exposure, afternoon shading essential to prevent leaf scorch.

When clearing land to plant cacao, deliberately leaving some trees standing as a temporary or permanent shade is good practice. This not only helps minimise leaf scorch but contributes to maintaining the humid microclimate in which cacao thrives. Planting under a fast-growing, short-lived perennial, such as Banana (Musa acuminata), is common in the absence of trees.

There are generally three types of cacao, 'Criollo', 'Trinitario' and 'Forastero'. Criollo and Trinitario beans are considered to have the best flavour but make up only about 10% of the world's production. The bulk is Forastero cacao, produced primarily in the West African countries of Ghana, Cameroon, Nigeria and the Ivory Coast.

Cacao trees start flowering and fruiting when three to five years old and continue bearing for another forty years. Under optimal conditions, cacao trees may yield up to 2,250 kgs of dry cacao beans per hectare per year (2000 lbs per acre per year), but less than a quarter of that on average.