Mango is a well-known, and widely cultivated, fruit tree originating in India and Southeast Asia, its natural range extending across north-east India and Myanmar (formerly Burma). A result of its extensive cultivation is that it has now become naturalised in almost all, if not all, subtropical and tropical regions of the world.

Wild forms in closely spaced forests may reach heights of up to 30 m (100 ft) but are around half that height on open sites. Today's cultivated varieties are smaller still, typically 3 to 10 m (10 to 32 ft) tall and develop a stout trunk supporting a densely leafy rounded crown.

The leaves are variable in shape and size but usually are elongated oval with a pointed tip, 10 to 20 cm (4 to 8 in) long, reddish when young, or in some varieties purple, ageing to dark glossy green. They remain on the tree throughout the year and give off a strong, sweetly resinous aroma when crushed.

The flowers are pale yellow, small and insignificant, borne in branched pyramid-shaped clusters arising at the ends of the branches. They come into bloom in the dry season, coinciding with winter in its native range and are followed by green oval fruit. The fruit ripen in summer and vary widely in shape, size and colour, depending on the variety, of which there are hundreds.

Mango is cultivated for its fruit which are mostly eaten ripe, usually fresh and out-of-hand. The pulp is also pureed and made into drinks or is used to flavour desserts such as ice cream, sorbets and yoghurt, or is sometimes incorporated in cakes, puddings and other baked goods. In Mexico, the sliced pulp is enjoyed dipped in chilli flakes or powder.

Ripe but still firm fruit are sometimes processed into dried fruit and in some regions, the unripe fruit are peeled, sliced and used in the creation of pickles and condiments, including chutneys, acahrs and sambals. In Thailand and Vietnam, green mango pulp is sliced thinly into strands and used in salads dressed with lime juice, fish sauce and peanut oil.

Mango flowers produce good amounts of nectar and are a major bee forage and nectar source in Cuba, Haiti, Jamaica and Venezuela, with honey yields averaging around 23 kgs (50 lbs) per colony per season. The honey varies in colour from reddish to very dark amber and has a distinctive flavour.

The seed kernel contains about 10 to 15% of an edible fat known as 'Mango Butter', with a melting point of 34 to 43 °C, which is similar to that of Cocoa Butter (from Theobroma cacao). This makes it valuable as a Cocoa Butter Equivalent (CBE) fat, used in extending or replacing Cocoa Butter in the manufacture of chocolate-based confectionery.

Mango butter also has moisturising, emollient and anti-inflammatory properties and is reportedly protective against UV (Ultraviolet) radiation. It is used in skin-care products such as lotions, sun and after-sun products, hair conditioners and as a substitute for paraffin-based emollients.

The bark on wounding exudes a reddish-brown gum that at one time was sold in bazaars in India, as a substitute for Gum Arabic (from Senegalia senegal).

Mangos are a good source of natural sugars and vitamins, in particular Beta-carotene, Vitamin A, Vitamin B1 (Thiamine), Vitamin B2 (Riboflavin) and Vitamin C (Ascorbic acid).

The gum-exude is used in dressings for scabies and cracked, dry skin, mostly on the sole of the feet. 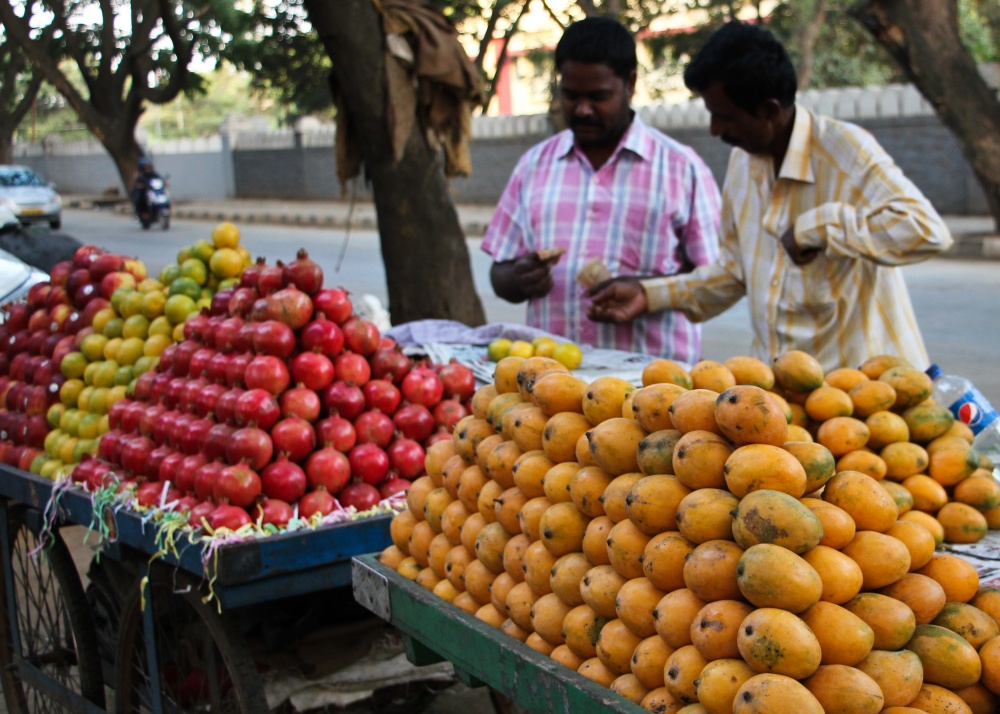 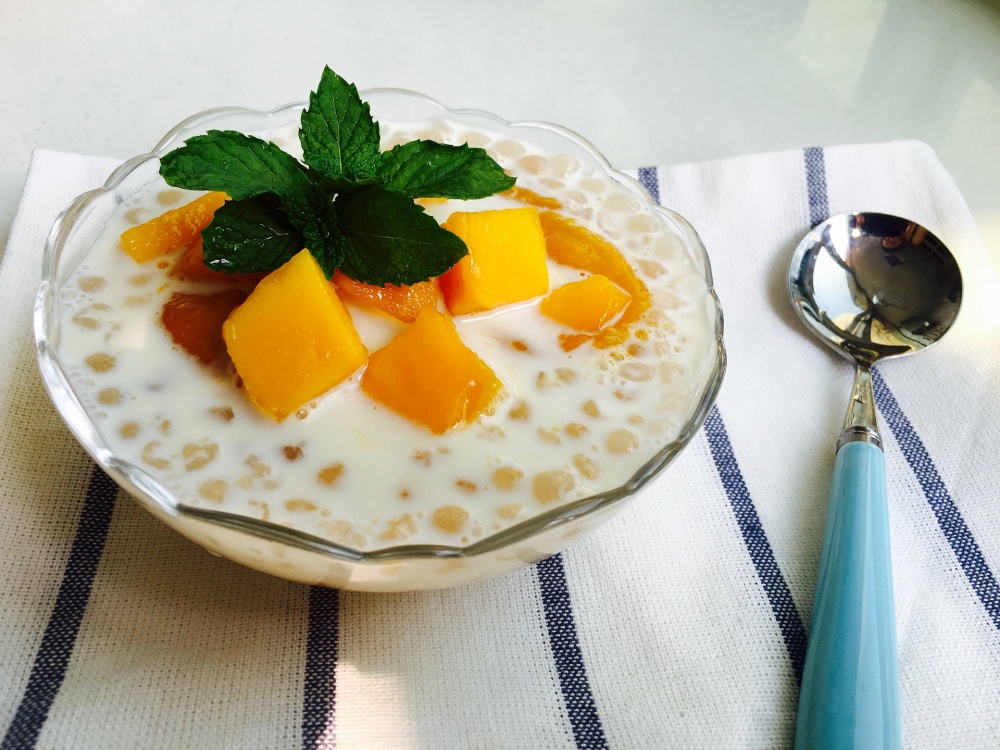 Chunks of mango with sago pudding (Image by zhaona1206 from Pixabay)

Mango flowers, particularly those of commercial varieties, are susceptible to fungal attack, with a dry period needed during flowering and fruit-set to produce a good crop of quality fruit.  For this reason, commercial varieties are most productive in seasonally dry climates, generally frost-free subtropical and tropical climates with annual lows of 12 to 25 °C, annual highs of 22 to 35 °C, annual rainfall of 700 to 5000 mm and a dry season of 3 to 8 months.

Ordinary, non-commercial varieties are less affected by humid conditions during flowering and will produce fair to good quality fruit in areas with a short dry season, or where the dry season is not pronounced. Worth trying in these areas are fungal (anthracnose) resistant varieties such as ‘Caraboa’, 'Carrie’, 'Chenna-Swarnarekha', ‘Earlygold’, ‘Edward’, ‘Florigon’, 'Fairchild’, 'King Thai', 'Nariayal', ‘Paris’, 'Rapoza’, ‘Saigon’ and 'Van Dyke'.

Although normally associated with the tropics, mango cultivation has progressed in recent years to peripheral regions such as the Mediterranean, where it is prospering in Israel, Egypt, Spain and Morocco.

Mango seeds start to lose their viability after about three months and are best sown soon after the fruit has ripened.

The tree performs best on deep, rich, free-draining clay-loam, loam, sandy-loam and loamy-sand soils of a moderately acid to neutral nature, generally with a pH of 5.0 to 7.5. and on sites with full to partial sun exposure. The tree has good tolerance to drought and seasonal flooding but poor tolerance to slow-draining soils.

Mangos come in literally hundreds of varieties and cultivars, differing in tree size, fruit size, fruit shape and skin colour, as well as in the colour, flavour and texture of the pulp.

Early ripening varieties such as 'Osteen', 'Kensington Pride', 'Tommy Atkins' and 'Haden' are the most suitable for growing in cool subtropical and warm Mediterranean climates. The ‘Keitt’ variety, although grown commercially in southern California, is a late variety that ripens too late and will not flush before winter. This results in biennial bearing, meaning good cropping one year followed by poor cropping the next. 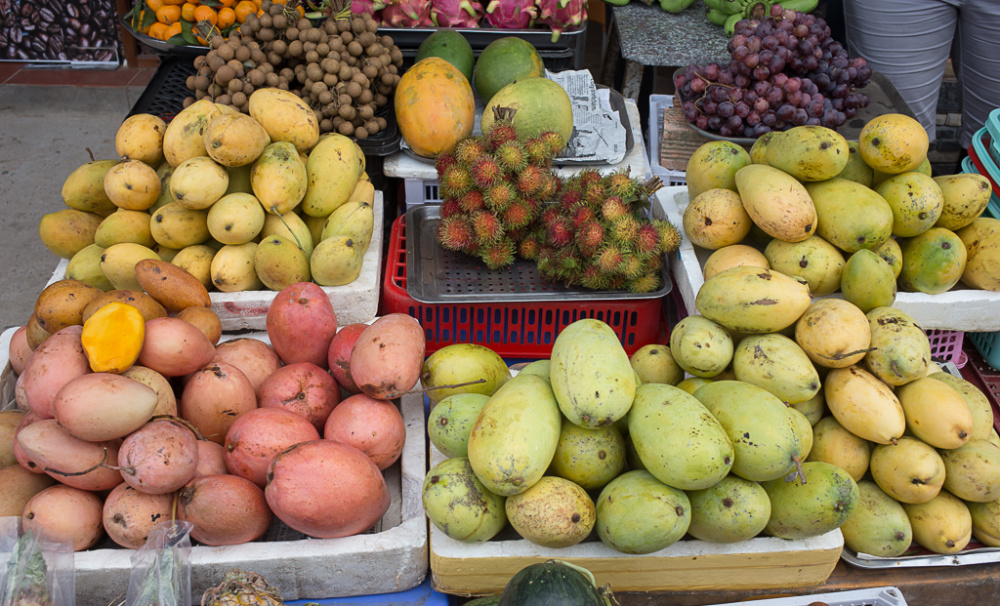 Mango has naturalised in countries where it is introduced and has escaped cultivation in some, being recorded as a weed of agriculture, probably as a result of the seed being discarded by people or dispersed by large animals. It is assessed as a low weed risk species for Hawaii, by the Hawaii Pacific Weed Risk Assessment (HPWRA) project.