Areca palm is an elegant tall palm originating in the region extending from coastal India to Southeast Asia and has long been cultivated for its fruit, the seed of which are a popular masticatory.

Flowering is seasonal in areas with a distinct dry season but continuous where humid conditions prevail. The flowers are small, pale yellow and either female or male held in large branched flower-stalks arising at the base of the crownshaft. Male flowers open before the female ones and fall before the latter open, ensuring cross-pollination with other plants.

The flowers are followed by egg-shaped fruit about 5 cm (2 in) long that are green when young, becoming orange, less commonly scarlet when ripe. They have a hard fibrous husk surrounding a single seed and ripen approximately eight months after fruit-set. 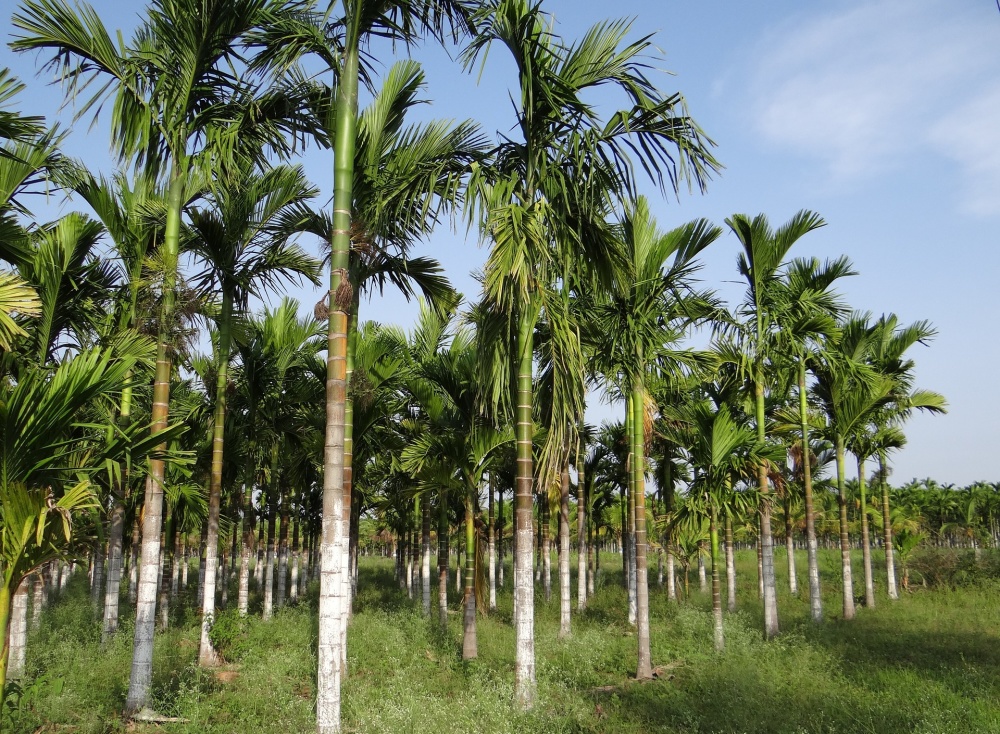 The seed of ripe fruit are used as a masticatory by about a tenth or more of the world's population, which represents hundreds of millions of people.

The seed, after being extracted from the fruit, is thinly sliced, boiled to reduce the tannin content and then dried, usually in the sun. The dried pieces are then mixed with other ingredients, usually chewing tobacco and spices, then wrapped in Betel Pepper (Piper betel) leaves and chewed. The mix of spices and flavourings that accompany betel nut vary by region but may include Cardamom (Elettaria cardamomum), Clove (Syzygium aromaticum), Tamarind (Tamarindus indica) and slaked-lime paste, derived from limestone.

The leaf-base, also referred to as the leaf-sheath, has a wide range of uses, some of which are only just now being explored. It is the part of the leaf that wraps around the trunk to form the crownshaft and is a tough, fibrous material similar to leather.

After the old leaves have died and fallen, the leaf-bases are gathered from the ground. They are large curved pieces that after being flattened into rectangular sheets, are washed and cut into shapes for making sandals, baskets and other traditional items. Today, with growing concerns about plastic waste, more are being turned into bio-degradable plates and food containers to replace disposable ones made from plastic. Although mostly confined to India and Malaysia, where there are large Areca palms plantations, demand from overseas markets have created new export opportunities for these environmentally friendly products.

The palm's slender and graceful form makes it ideal for gardens, either singly or in groups of three or more plants. It has some tolerance to soil salt conditions, though less so than Coconut (Cocos nucifera), which makes it suitable for seaside gardens but at some distance from the shoreline. 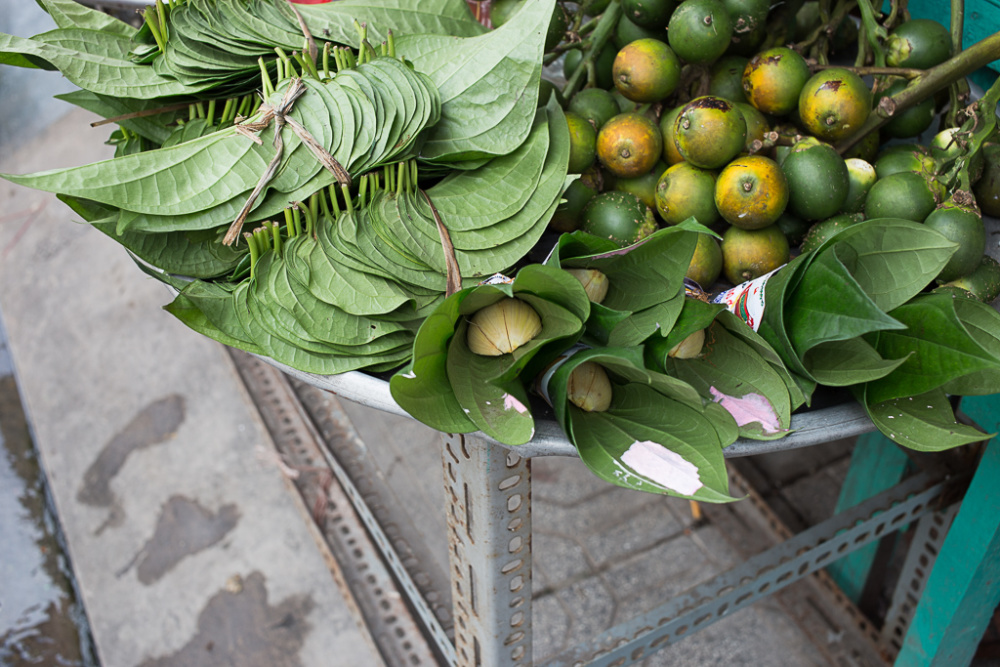 Alkaloids present in betel nut are known to act as a stimulant and appetite suppressant, the former being the main benefit sought by those who consume it. In India, betel leaf parcels known as 'Pan' are chewed as an after-dinner digestive to combat post-meal sluggishness.

Chewing betel nut is strongly associated with several major health problems, including heart disease and oral cancer. However, betel nut is often chewed in combination with tobacco, slaked lime and betel leaf, and it is not clearly understood how much each item contributes to the cause of each disease.

One of the alkaloids present in betel nut is 'Arecoline', a potent vermifuge with a history of use in veterinary medicine as a worming agent for dogs and other animals.

In India, the seed are also burnt to charcoal that is powdered to make a dentifrice, a substance mixed with water and applied to a toothbrush to whiten the teeth. This is achieved by the charcoal's abrasive action removing deposits such as stains, plaque and tartar.

Areca palm grows naturally in humid tropical climates, generally in frost-free areas with annual lows of 18 to 25°C, annual highs of 27 to 35°C, annual rainfall of 1300 to 6000 mm and a dry season of 5 months or less, extending to 7 months with irrigation.

New plants are usually started from seed, which germinate readily and are best sown in deep containers with a free-draining potting mix. The young seedlings are kept in a nursery and under shade until they have developed at least three to four leaves, after which they are planted out. In seasonally dry areas, it is common practice to plant the seedlings under a fast-growing tree, to provide shade for their first few years.

Performs best on free-draining clay-loam, loam and sandy-loam soils of a moderately acid to moderately alkaline nature, generally with a pH of 5.0 to 8.0 and on sites with full to partial sun exposure. It has poor tolerance to drought and slow-draining or waterlogged soils.

Acrea Palms start to flower and fruit when about six to eight years old.

When Betel Nut seed is ingested, it is known to cause vomiting, diarrhoea, irregular heartbeat, respiratory problems, convulsion and coma.

Areca Palm is recorded as a weed in East Africa, though not as a serious weed or invasive species. It is assessed as a low weed risk species for Hawaii, by the Hawaii Pacific Weed Risk Assessment project (HPWRA)

Pollen released by the male flowers is known to cause hay fever in some people.