Betel pepper is a perennial vine related to Black pepper (Piper nigrum) and originates in India and Southeast Asia. It is cultivated there for its leaves, which are used for wrapping various ingredients into parcels for chewing.

As a shade-loving vine, it prefers filtered sunlight and, when young, consists of fleshy, herbaceous stems with aerial roots arising at nodes along the length, enabling it to climb vertical structures such as tree trunks. Over time, the young stem becomes woody, with herbaceous growth limited to new growth branching off the main vine. Under ideal conditions, individual vines can attain a length of up to 15 m (45 ft).

Leaves are heart-shaped, 10 to 18 cm (4 to 7 in) long, on top dark glossy green and prominently ribbed, underneath pale green. They are alternately arranged along the stems.

Flowers are white, tiny, and female or male on separate plants. They are held in cylindrical spikes arising at the leaf base and bloom on and off throughout the year. Fertilised flowers develop into tiny, fleshy green fruit tightly packed on a fruiting spike, somewhat resembling a mulberry.

Betel pepper leaves are used in India, Southeast Asia and the Pacific as a wrapping material for chewable parcels. The ingredients vary by region but often include thin slivers of Betel nut (Areca catechu) and spices. The parcels are then chewed as a stimulant or appetite suppressant.

In India, the leaves are also used for wrapping chewable parcels without Betel nut. Commonly referred to as 'Sweet Paan', they contain ingredients such as Coconut (Cocos nucifera), Cardamom (Elettaria cardamomum), Clove (Syzygium aromaticum), raisins, glazed cherries and 'Gulkand', a sweet Indian preserve made from rose petals. Sweet Paan is consumed as an after-meal digestive and is typical street-vendor fare in India. 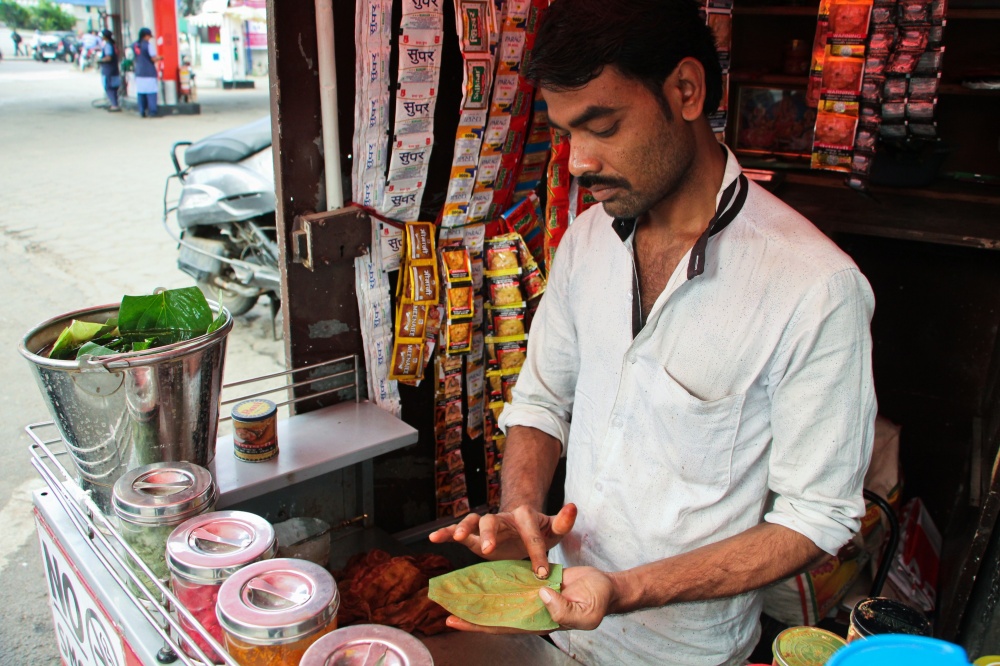 The leaves on steam distillation yield about 1% of a bright yellow to light brown essential oil traded as 'Paan oil' or 'Betel leaf oil'. It has a warm, biting and unpleasantly sharp, bitter taste. Due to a high phenol content of up to 75%, it has a sickeningly sweet and tarry aroma. Its use is limited chiefly to medicines, breath fresheners and oral hygiene products such as mouth-washes. It is also reputedly used as a flavouring in Paan liqueur, a traditional Indian liqueur distilled from betel leaf, nuts, dried fruits and spices.

Betel leaf oil oxidises on contact with iron, becoming discoloured, and must be stored and transported in either glass or stainless steel containers.

Grows naturally in humid subtropical and tropical climates, generally areas with annual lows of 19 to 25°C, annual highs of 27 to 35°C, annual rainfall of 1300 to 5000 mm and a dry season of 4 months or less.

Betel pepper is also cultivated with irrigation and shade in dry areas, such as in Thanjavur, in Tamil Nadu, India, which receives only 940 mm annual rainfall and has a dry season of up to 7 months.

Only male plants are cultivated, as female plants lack vigour and are susceptible to disease. Therefore, fertile seed are not readily available. New plants usually start from cuttings of six to eight nodes taken from two-year-old plants.

Performs best on free-draining clay-loam, loam and sandy-loam soils enriched with well-rotted manure, and adjusted to a moderately acid to neutral pH, generally in the 5.5 to 7.5 range. Planting sites need light shading and staking, or trellising is essential for good vine growth and leaf production. Betel pepper vines have poor tolerance to slow-draining, waterlogged and saline-alkaline soils.

Betel pepper is recorded as a weed in at least one reference publication but not as a serious weed or invasive species. It will only likely become a serious weed if male and female plants are grown together.