Black Pepper is probably the world's most widely consumed spice and originates from the Western Ghats, a hilly region stretching north-south along the west coast of India.

It is a perennial vine with woody stems up to 10 m (33 ft) long and 6 cm (2.5 in) in diameter, off of which branch soft, green, herbaceous stems. The herbaceous stems, as they grow, sprout aerial roots at nodes along the length that cling to structures they make contact with, in many cases tree trunks, supporting the vine as it grows and climbs.

On vertical structures, the criss-cross entanglement of vines usually assumes a columnar shape that may be anywhere from 3 to 5 m (10 to 16 ft) tall. Black pepper vines also develop extensive root systems, with large roots up to 4 m (13 ft) long, but most remain within 1 m (3.3 ft) of the soil surface.

Leaves are broadly oval, 13 to 25 cm (5 to 10 in) long, pointed at the tip, dark glossy green and prominently ribbed on top, underneath pale green. They are borne alternately along the length of the soft, climbing stems and remain on the vine in all seasons.

Flowering is encouraged by increased humidity and moisture brought on by the rainy season. The individual flowers are tiny and insignificant, creamy-white and borne on pendant flower spikes 5 to 15 cm (2 to 6 in) long. These arise at nodes opposite the leaves and have tightly clustered on them from fifty to one hundred and fifty flowers.

The fertilised flowers are followed by tiny, round, green berries, becoming orange-yellow then red when fully ripe and have fleshy pulp surrounding a single seed. They are slow to mature, taking about seven to eight months to ripen fully and ripen unevenly, with green and red berries present on the same cluster of up to sixty berries. 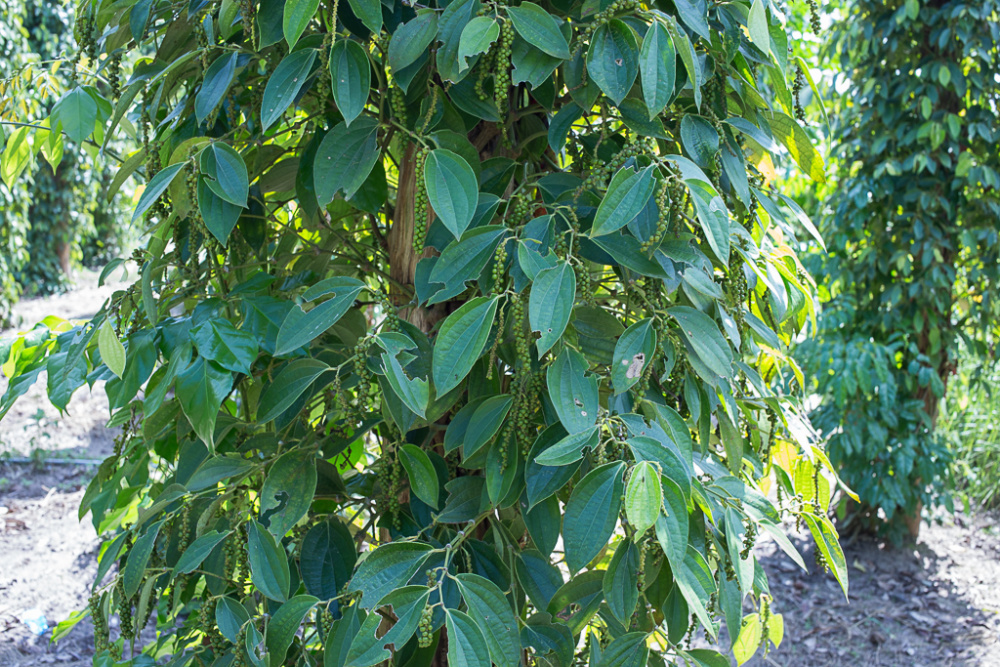 The berries or peppercorns are the source of a range of spice or flavouring products, with black pepper chief among them in the volume produced. Other significant products derived from the berries include white pepper, green pepper and pepper oil.

Black pepper is the whole green berries dried until they become black. Clusters are harvested when the berries are mature but still green. The berries are stripped off, soaked in hot water for around ten minutes and dried under the sun, usually on bamboo mats spread out on a large, flat, concrete surface or patio. They are then raked and shifted under the sun for around two weeks, after which they are bagged for shipping, processing and packaging into whole or ground black pepper.

For white pepper, the clusters are harvested when most berries have turned red. The berries are then stripped from the clusters and soaked in running water for about two weeks to macerate them and remove the pulp. The cleaned seed are then dried under the sun as for black pepper, but instead of becoming black develop a grey-white colour.

Black pepper and white pepper are widely used as a flavouring agent in food and beverages, including meat and meat products, baked goods, sauces, condiments and relishes, as well as alcoholic and non-alcoholic drinks. White pepper is less intense, has a more mellow flavour, and is preferred for white sauces and light-coloured dishes because of its light colour.

Green pepper is made from berries harvested at the same stage of ripeness as black pepper but are processed in such a way as to maintain their green colour. After harvest, the green berries are either dried or preserved in vinegar or brine. If they are to be dried, the berries are dehydrated under controlled conditions that maintain their green colour. Drying is done to reduce transport costs, as the berries are re-hydrated before they are used. Green pepper is popular because of its attractive green colour, aroma and mild spice. Green peppercorns are primarily used whole, mainly in sauces to accompany meat and seafood dishes.

Pepper oil is a colourless to free-flowing green oil extracted by steam distillation, mostly from black pepper and the pulp discarded when making white pepper. However, pepper oil lacks the spice and flavour of black or white pepper. The active constituent giving pepper its sharp taste, a compound known as piperine, is insoluble and only present in small amounts in the oil.

Pepper oil is increasingly being replaced by oleoresins extracted from the berries using an edible organic solvent. The oleoresins are then emulsified using Gum arabic (Senegalia senegal). Pepper oleoresins are rich in piperine. They are used as a flavouring agent to replace black and white pepper, particularly in canned meats, pickles and bottled sauces.

As a fragrance, pepper oil is used for its peppery notes, mostly in men's colognes and after-shaves. Still, it is blended in small amounts in selected perfumes, such as 'Le Jardin D' Amour' and 'L'Interdit.' 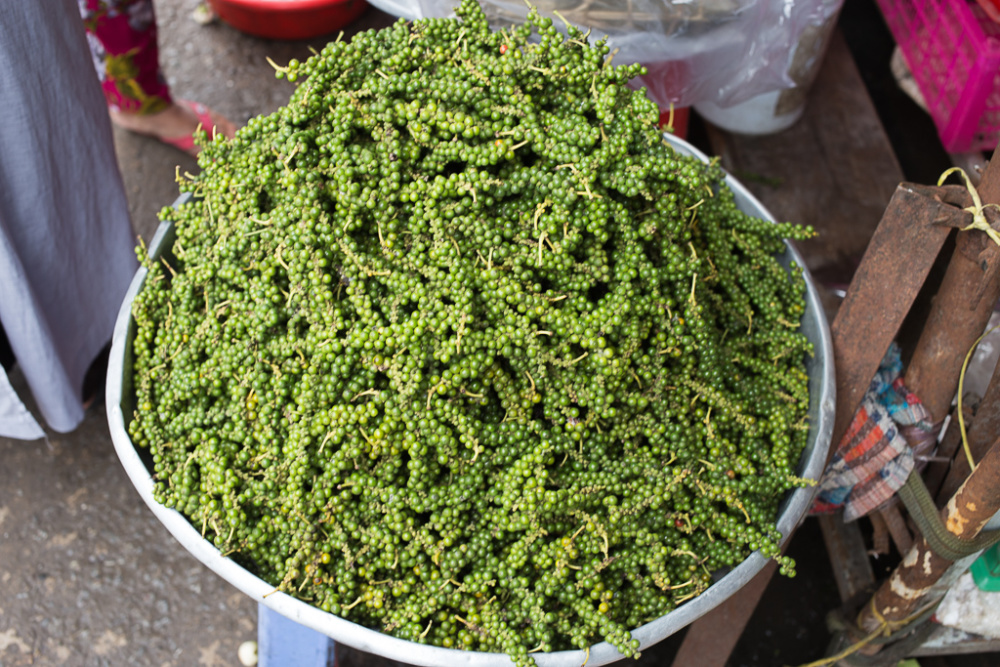 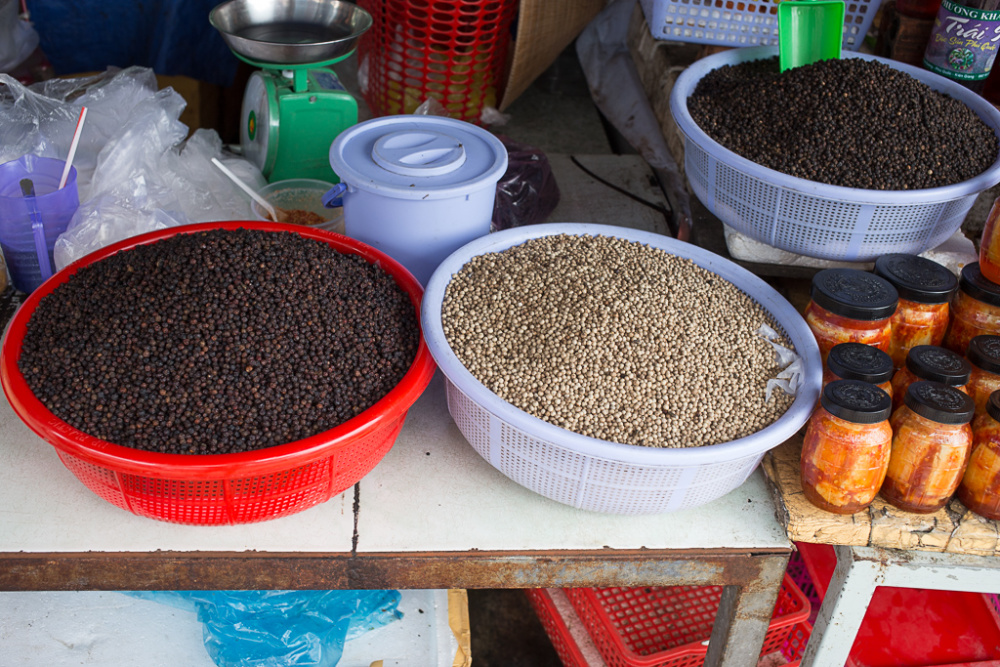 Black pepper berries owe their peppery or acrid taste to the alkaloid 'Piperine', which is present in quantities of up to 9% in the dried berries. Piperine by its action has a stimulating effect on the digestive tract and circulatory system.

Piperine acts as rubefacient, causing dilation of the capillaries, thereby increasing blood circulation to areas of the body it passes through. It is sometimes added to topical ointments and creams for this effect and has shown promise in the treatment of some skin problems, including vitiligo.

Black pepper is commonly used in home remedies to treat digestive complaints, including stomachache, flatulence, constipation and bloating. It is also ground and added to warm drinks given to patients with fever.

Black Pepper was initially used by Europeans as a preservative, particularly to preserve meats and it is still today regarded as an essential natural preservative in sausages.

Black Pepper grows naturally in humid tropical lowland climates, generally frost-free areas with annual lows of 19 to 25°C, annual highs of 27 to 35°C, annual rainfall of 1500 to 5500 mm, and a dry season of 4 months or less. Black pepper vines may fail to thrive in areas where the average low of the coldest month is below 15°C (57°F).

New plants are usually started from cuttings but can also be raised from seed or using air-layering (circumposing) techniques. When cuttings are used, they are best taken from new growth on high-yielding vines and should be about 60 cm (2 ft) long with five to seven nodes present. These are then planted cut-end in containers with a free-draining potting mix and kept under 50 to 75% shade in a nursery for about four to five months.

Planting out is best at the start of the rainy season and the cuttings should thereafter be trained to climb up on a pole or trellis. In less formal, backyard type cultivation, the vines are usually trained to climb up a tree or palm trunk, especially those with a combination of a slim trunk and textured bark, such as a Coconut (Cocos nucifera) and Areca Palm (Areca catechu).

Black Pepper performs best on deep, humus-rich, free-draining clay-loam, loam and sandy loam soils of a moderately acid to neutral nature, generally with a pH of 5.5 to 7.0, and on sites with partial sun to light shade exposure.

Vines start to flower and fruit when they are about two years old but do not come into full production until they are seven or eight years old. They will continue bearing for up to twenty years if well managed. Yields from mature vines range from 1.8 to 2.3 kg (4 to 5 lbs) of dried berries each season. 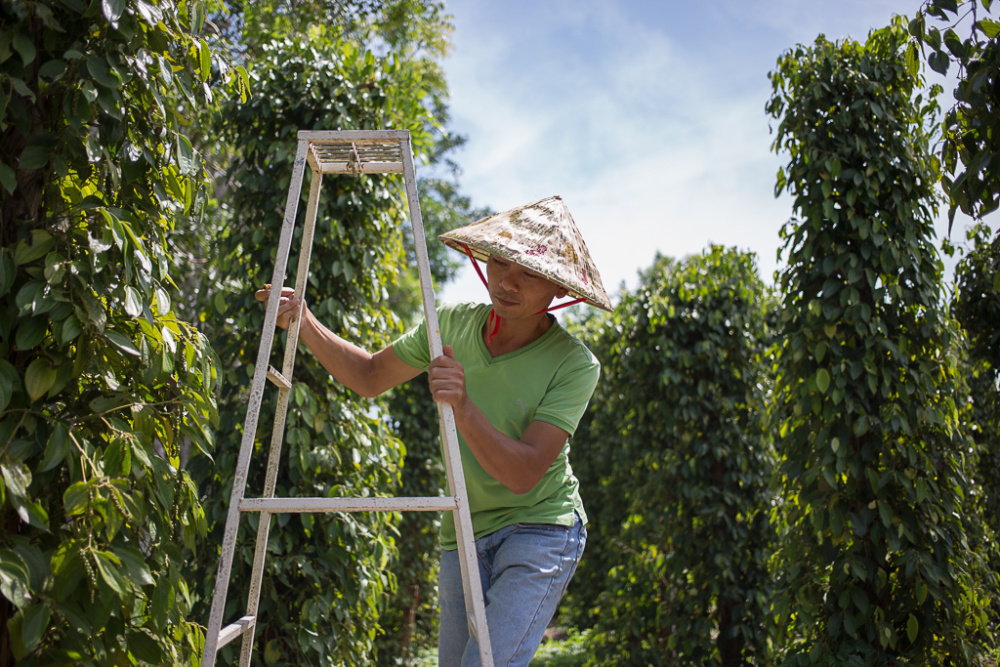 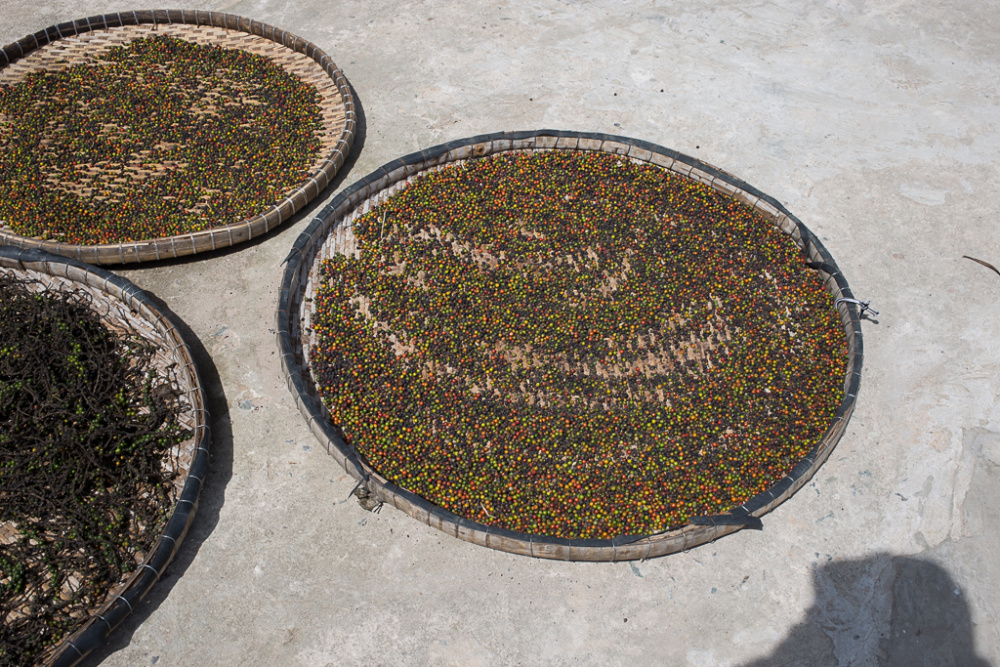 Black Pepper is listed as a weed in more than one reference publication, but there does not appear to be any records of it anywhere as a serious weed, despite its widespread distribution and cultivation.