Originating in humid areas of tropical America and the Caribbean, soursop is now introduced and cultivated in parts of Africa, India, Southeast Asia, Australia, Hawaii and the wider Pacific.

It is a small, densely leafy tree 3 to 8 m (10 to 26 ft) tall with a slender trunk and low-branching habit, forming a pyramidal or narrowly rounded crown. The bark is grey to grey-brown and smooth.

Leaves oblong, from 10 to 20 cm (4 to 8 in) long, dark glossy green on top, pale dull green underneath and remain on the tree throughout the year, though some leaf-fall may occur in areas with a long or pronounced dry season.

Flowers 3 to 5 cm (1.2 to 2 in) long with a three-sided pyramidal shape, made up of three outer and three inner yellow petals slightly opening. They are bisexual, with both female and male parts and are borne singly on the trunk and branches during the humid months. Hanging pendant on short stalks, they give off a sweet, musky odour that attracts pollinating insects.

The fruit that follow are oval to heart-shaped and large, typically 15 to 40 cm (6 to 16 in) long, up to 20 cm (8 in) wide, weigh from 1 to 7 kg (2.2 to 15 lbs) and have thin green skin dotted with soft spikes. Immature fruit are dark green and firm, becoming pale green and with a musky odour when mature, indicating its readiness for harvesting.

After harvesting, the fruit are stored for around four to five days, becoming soft to the touch when fully ripe. The thin skin is easily peeled, revealing soft, juicy, fibrous white pulp studded with large, oblong, glossy dark brown seed. 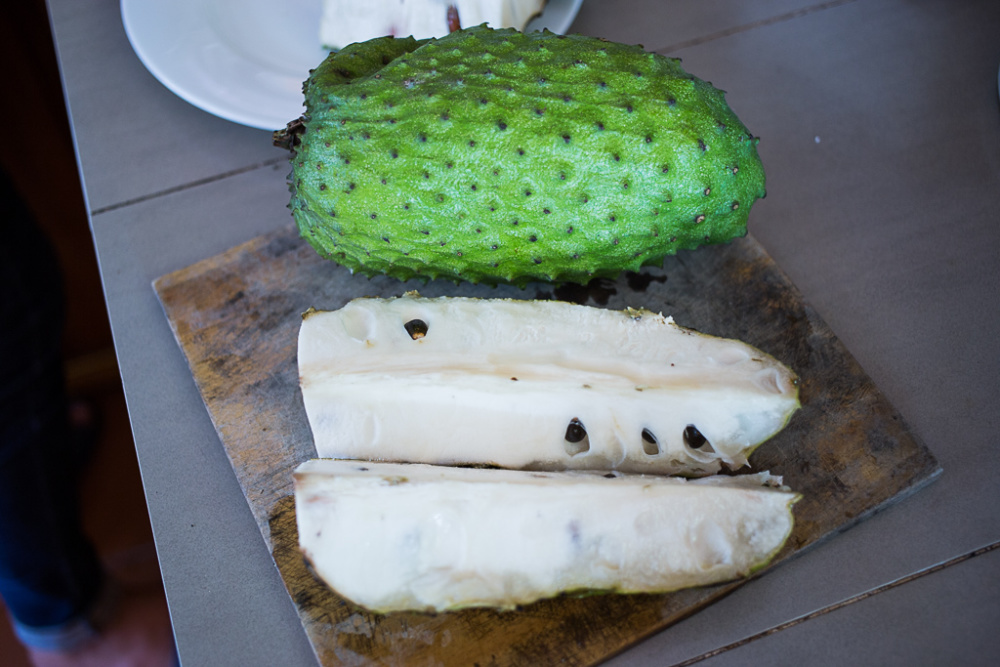 The pulp can be eaten fresh out of hand, though it is more commonly pressed through a sieve to extract the juice or liquefied in a blender. Care is taken before processing to remove the large seeds. In its natural form, the juice or liquefied pulp is milky-white, smooth and has a sweet-sourish, somewhat musky flavour.

Soursop pulp is made into chilled drinks and desserts, including smoothies, ice cream and sorbets. In the West Indies, the juice is extended by smoothing it with milk and is then spiced with grated nutmeg (from Myristica fragrans) to make a refreshing drink. The de-seeded pulp can also be torn or cut into pieces and added to fruit salad or it can be chilled or frozen for later use. 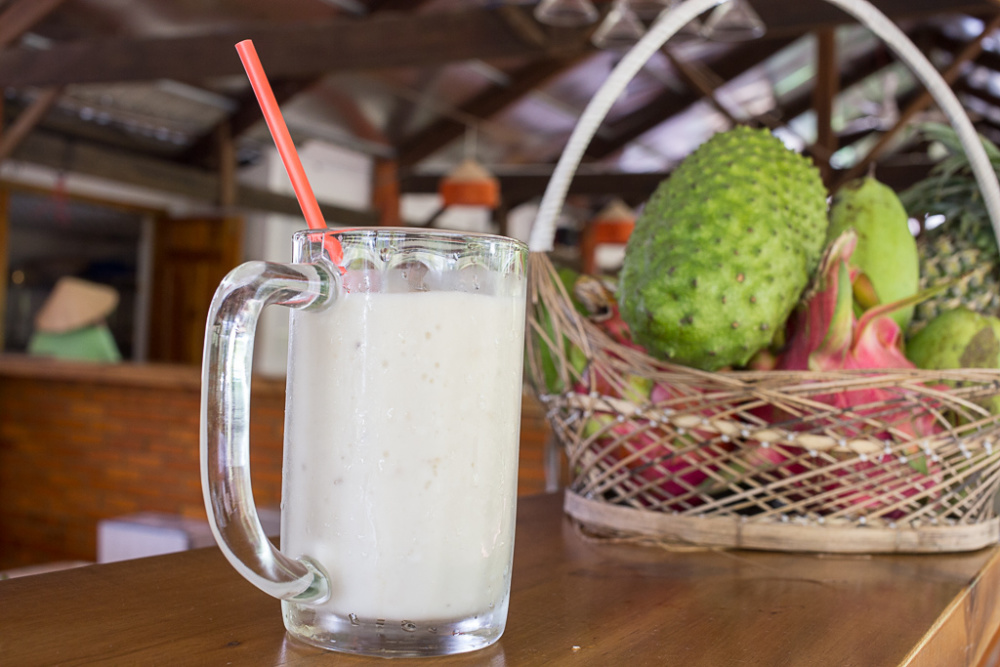 Grows naturally and produces a fair-to-good crop of fruit in sub-humid to humid subtropical and tropical climates, generally frost-free areas with annual lows of 13 to 25 °C, annual highs of 24 to 35 °C, annual rainfall of 800 to 4000 mm and a dry season of 6 months or less, extending to drier areas with irrigation or groundwater.

Soursop trees do poorly in areas where the average low of the coldest month is below 10 °C (50 °F) and may even die-back if exposed to frost. Further, the tree needs both warmth and humidity to initiate flowering, which may not happen in areas where the springtime climate is too cool and dry.

New plants are usually started from seed, but can also be produced using air-layering (circumposing) methods. Young plants are planted-out when around 30 cm (12 in) tall and at the start of the rainy season. They develop quickly and may start to flower and fruit in their third or fourth year, depending on the growing conditions.

Growth and fruiting performance are best on rich, free-draining loam and sand soils of a moderately acid to slightly alkaline nature, generally in 5.5 to 7.5 pH range, and on sites with full to partial sun exposure.

Although moderately drought tolerant, soursop trees have a shallow root system and so benefit from irrigation and mulching in low rainfall areas, particularly when flowering and fruiting. Trees perform poorly on clayey, slow-draining and waterlogged soils, with poor fruit-set and low yields the usual result.

Some varieties include ‘Bennett’ (large fruit with flavoursome pulp), ‘Whitman fibreless’ (delicious melting pulp, but a shy bearer), 'Giant' (produces exceptionally large fruit), ‘Morada’ (commercial variety from Colombia), and 'Ratu’ and ‘Sirsak' (from Southeast Asia). There is also 'Mountain', a cold-tolerant, highland variety with pale yellow pulp, but the flavour is poor and it is instead mostly used as rootstock for other varieties.

Yields of up to fifty fruit per tree per year have been reported for ten-year-old trees grown under intensive cultivation, however, yields vary greatly among the different varieties and under different growing conditions, with yields from homegrown trees about half to a quarter that of trees in commercial orchards.

Soursop has been recorded as having escaped cultivation and as a weed of the natural environment and agriculture. However, there does not appear to be any records of it anywhere as a serious weed or invasive species. It is assessed as a low weed risk species for Hawaii, by the Hawaii Pacific Weed Risk Assessment (HPWRA) project.

The seed are reportedly toxic and have been used traditionally as an insecticide and fish poison.