Nutmeg is a spice tree believed to originate from the Moluccas Islands, a small group of islands in the Indonesian Archipelago which, according to botanists, is also the home of the Clove tree (Syzygium aromaticum).

Today, the tree is widely distributed throughout South-East Asia and cultivated in many other humid tropical regions worldwide, including parts of India, Sri Lanka, Madagascar, Tanzania, Central America, and the Caribbean. It is cultivated for its fruit, the source of the well-known spice used for centuries to flavour sweet and savoury dishes, including baked goods, desserts and beverages, especially milk-based ones.

A medium-sized tree, it may reach heights of up to 25 m (82 ft), though in cultivation is more typically 5 to 15 m (16 to 50 ft) tall. The trunk is usually straight and slim, up to 30 cm (1 ft) in diameter, and supports a densely leafy crown. On open sites, young trees develop a pyramidal-shaped crown that with age becomes more rounded and wide-spreading. The bark is brownish-grey, smooth and on wounding exudes a sticky, lightly-red coloured gum.

Leaves are oblong with a pointed tip, up to 15 cm (6 in) long, glossy dark green on top and pale green underneath. Alternately arranged along the stems at the ends of the branches, they remain on the tree in all seasons. When crushed, they release a sweetly spicy aroma.

The flowers are small, creamy-yellow, waxy, fleshy, and either female or male on separate trees. Male trees usually bear clusters with more flowers. Still, it is difficult to distinguish the sex of the tree before it reaches maturity. Therefore, seedling plants are mainly used as rootstock to graft on the cuttings from selected male and female trees.

Flowering occurs on and off throughout the year, with the flowers opening at night and emitting a sweet fragrance to attract moths, the trees specialist pollinators. Fertilised female flowers develop into pale-green, pear-shaped or roundish fruit 4 to 5 cm (1.5 to 2 in) in diameter. When ripe, the fruit becomes pale yellow then splits lengthwise to expose a single, large oval seed wrapped in a crimson netting. This netting or aril is the source of mace, the lesser-known of the two spices produced from the fruit. Inside the seed is a large fleshy kernel, which is the nutmeg of the spice trade.

There are no officially recognised nutmeg varieties. Still, there can be considerable variation in fruit characteristics between trees in fruit shape and size, seed shape and size, and aril thickness and colour. 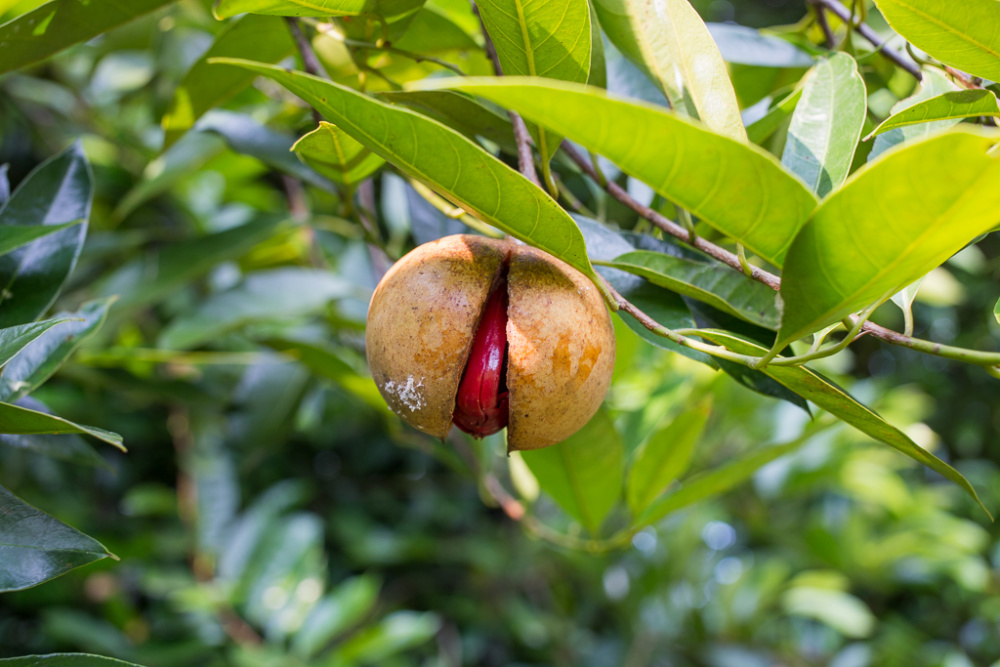 Nutmeg flavouring comes from the dried kernel, extracted from the seed by cracking open the shell after the whole seed is thoroughly dried. The seed with the mace removed is traditionally dried under the sun until the kernel rattles in the shell. It takes about a week of drying for this to be achieved. The drying process is more technologically advanced in today's commercial operations, with the seed dried indoors under forced-air conditions.

Dried nutmeg kernels are used worldwide, either whole and freshly grated or in powdered form, to flavour sweet and savoury dishes. In colonial Britain and still today, it is used to spice traditional alcoholic drinks, such as mulled wine and traditional milked-based desserts and beverages, such as junket and egg-nog. It has also become an indispensable ingredient sprinkled atop freshly baked pies like apple and pumpkin and atop fondue and other creamy cheese sauces, as well as classic milk-based sauces such as bechamel.

The dried kernels, rejected for one reason or another, are crushed and converted into nutmeg oil or nutmeg butter. Nutmeg oil, a volatile, pale yellow essential oil extracted by steam distilling the crushed material, is used to flavour food, drinks, medicines, tobacco and toothpaste. Nutmeg oil is also commonly used to lend a spicy or masculine note to perfumes, colognes and grooming waters. It is found in popular fragrances such as 'Blue Grass', 'Panthere' and 'Sybaris'.

Nutmeg butter, a highly aromatic yellow fat similar in consistency to dairy butter, is extracted by pressing the crushed kernels between heated plates in a steamer. It is used mainly as a base for ointments.

Mace, the part of the fruit wrapped around the seed, is also traded as a spice. After separating it from the seed, it is usually dried, but only for a few hours to maintain its crimson colour. Mace is mainly used as a nutmeg replacement and, although weaker, has a more complex flavour. Mace oil, a pale yellow oil extracted by steam distillation, is sometimes used as a fragrance in sandalwood-type soaps and potpourri mixes.

Yields of nutmeg oil, mace oil and nutmeg butter average 8%, 9% and 30%, respectively, based on the weight of the material processed.

The fruit pulp is aromatic, fleshy, and juicy and is made into jam, jelly, and fruit preserves.

Nutmeg essential oil contains high levels of the compound Myristicin, which is known to have both a stimulating and soothing effect on the digestive tract. It achieves this by increasing the flow of gastric juices, leading to improved appetite and digestion. And its anaesthetic and anti-inflammatory effects help reduce nausea, vomiting and diarrhoea. 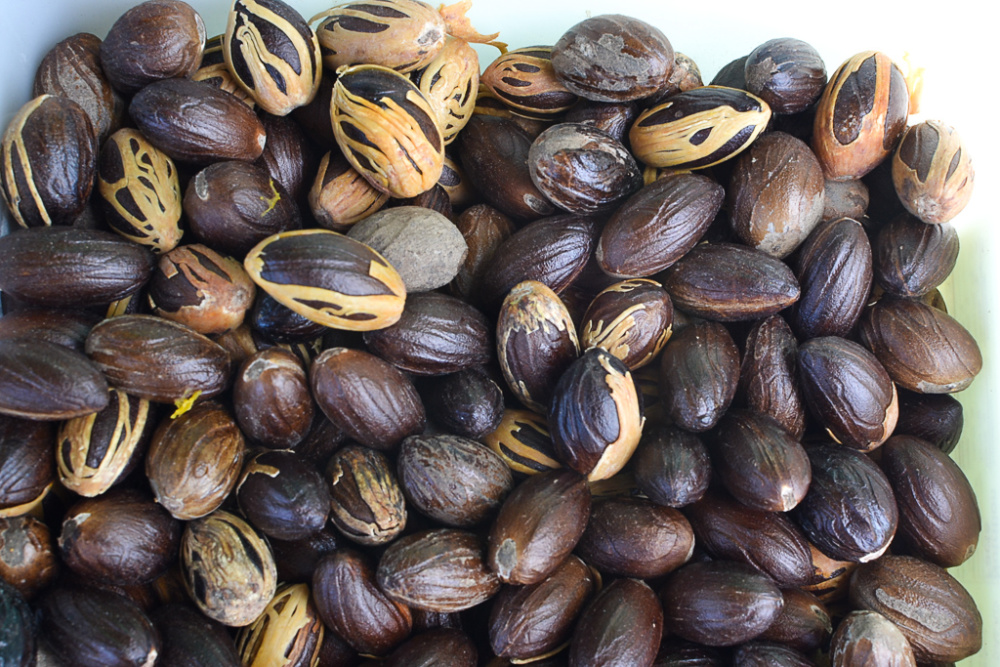 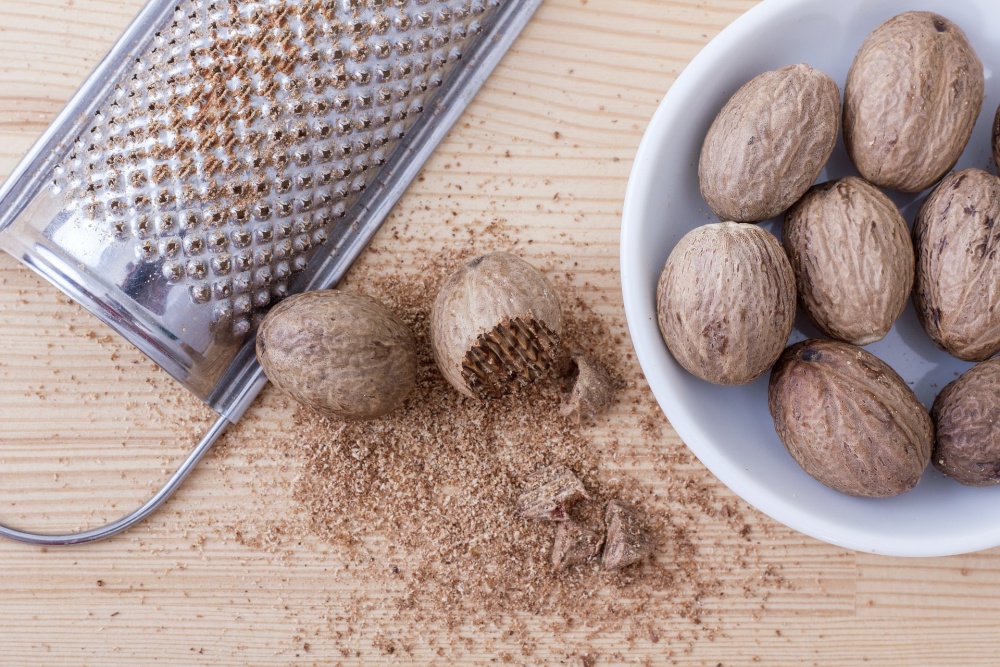 Nutmeg grows naturally in humid tropical climates, generally frost-free areas with annual lows of 18 to 25°C, annual highs of 27 to 35°C, annual rainfall of 1200 to 6000 mm and a dry season of 3 months or less.

Irrigation can extend Nutmeg cultivation to areas having a dry season lasting up to 5 months. When grown under drier-than-normal conditions, the trees benefit from a micro-climate where irrigation can be misted on them over the top of their canopy.

New plants can be started from seed or cuttings, but the sex of the seedlings is not easily determined, so cuttings are preferred. Good practice is to select cuttings from known male and female trees and then graft these onto seedling rootstock. Usually, this is around one male to every ten female trees to give good pollination and fruit production.

Performs best on rich, free-draining clay-loam, loam, sandy-loam and loamy-sand soils of a moderately acid to slightly alkaline nature, generally with a pH of 5.5 to 7.5, and on sites with partial to full sun exposure. However, the young plants need shading for the first few years of life to prevent sun-scorching. It is common to plant them under a fast-growing, short-lived perennial, such as Banana (Musa acuminata).

Nutmeg trees are slow to mature, only starting to flower and fruit when around five to nine years old, but will continue for many decades.

Individual nutmeg trees yield on average about 9 kg (20 lbs) of dried kernels per year. However, some trees may yield much more depending on the tree maturity and growing conditions. In Grenada, where nutmeg is grown commercially, yields of dried kernels average around 808 kgs per hectare (720 lbs per acre) and dried mace around 168 kg per hectare (150 lbs of per acre).

Nutmeg trees produce abundant fruit, but the seed are large and not easily dispersed. Despite widespread cultivation, there does not appear to be any record of it anywhere as a weed or invasive species. It is assessed as a low weed risk species for Hawaii by the Hawaii Pacific Weed Risk Assessment (HPWRA) project.

In extreme cases, overconsumption of nutmeg can cause flushing of the skin, irregular heartbeat, stupor and delirium. And it is an irritant to the skin, in some people causing contact dermatitis.