Originating from the Malayan Peninsula in Southeast Asia, the Mangosteen tree bears fruit highly esteemed in its native region and is second only to the Durian (Durio zibethinus) in popularity.

It is a slow-growing tree to heights of up to 30 m (98 ft) on favourable sites, though it is more typically 6 to 12 m (20 to 40 ft) tall with a straight trunk and low branching habit, forming a densely leafy pyramidal crown. The bark is dark brown, lightly flaking and on wounding exudes a sticky yellow latex.

Leaves are oval, 15 to 25 cm (6 to 10 in) long, reddish-pink when they emerge, ageing to lime green then dark glossy green and have a thick, leathery texture. They are arranged in pairs along the ends of the branches and remain on the tree throughout the year.

The flowers are four-petaled, 3.8 to 5 cm (1.5 to 2 in) across, set within four thick bowl-shaped sepals, the inner two red, the outer two yellow. They are borne singly, in pairs or threes on short flower stalks amidst the leaves and are functionally only female. As there are no male flowers, no pollen is produced. The fruit develops instead from the unfertilised female flowers in a type of asexual reproduction known as parthenogenesis.

The fruit are round, 6.4 to 7.6 cm (2.5 to 3 in) in diameter and crowned at the stem end by the sepals leftover from the flower. They have a smooth, thick rind that is green on young fruit, becoming dark purple when ripe. Inside is juicy white pulp separated into five to eight segments, with only one or two usually having seed.

The ripe fruit are much enjoyed in its native range and are eaten by cutting and lifting off the top half of the rind, scooping out the segments and sucking away the pulp in the mouth. The flavour is subtle, slightly acid and lies somewhere between a grape, peach and strawberry.

It produces a dark-red wood that is hard and heavy but seldom utilised because of the value of the tree for its fruit.

The rind is rich in tannins and is dried and used in traditional medicine as a treatment against diarrhoea, dysentery and abdominal pains. 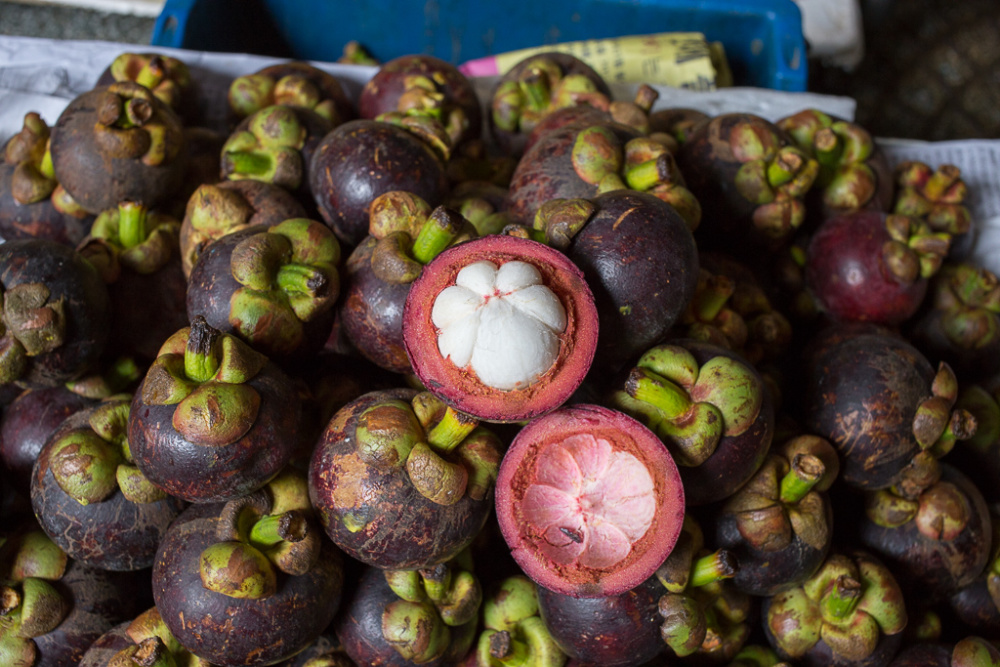 Mangosteen grows and fruits naturally in humid tropical climates, generally frost-free areas with annual lows of 19 to 25°C, annual highs of 27 to 35°C, annual rainfall of 1400 to 4500 mm and a dry season of 3 months or less. Mangosteen trees may fail to flower and fruit reliably in areas where the average low of the coldest month is below 15°C (59°F).

Mangosteen is also cultivated with irrigation in areas having a dry season lasting up to 5 months, such as in Darwin, Australia. When grown under drier-than-normal conditions, the trees benefit from a micro-climate where irrigation can be misted on them over the top of their canopy.

New plants are usually raised from seed but can also be started by grafting cuttings onto seedlings. Although grafting results in earlier fruiting, the fruit tend to be smaller, so seedlings are preferred. The seed should be sown soon after removing from the fruit, preferably in a free-draining potting mix and a container not less than 60 cm (2 ft) deep to give the long taproot room to grow. The seedlings are then tended in a nursery under shade until they are planted out.

Seedlings need to be planted before the taproot becomes root-bound, which occurs after about two years in the nursery. They need light shading for the first few years to prevent sun-scorch, and it is common practice to plant under a fast-growing, short-lived perennial, such as Banana (Musa acuminata). Seedling trees start bearing fruit when about eight years old. Mature trees yield from 500 to 1500 fruit per year, depending on the size of the tree and the growing conditions.

Performs best on deep, rich free-draining clay and loam soils of an acid to neutral nature, generally with a pH of 4.8 to 7.0, and on sites with full sun to light shade exposure. It has poor tolerance to soil salt, salt spray and alkaline or limestone soils.

Mangosteen is listed as a weed in at least one reference publication. Still, there does not appear to be any record of it anywhere as a serious weed. It is assessed as a low weed risk species for Hawaii by the Hawaii Pacific Weed Risk Assessment (HPWRA)project.