Durian is a tree bearing large, spiky, odorous fruit much-beloved in Southeast Asia, where it occurs in humid tropical forests, its native range extending from southern Thailand through Peninsular Malaysia to Indonesia and Borneo.

It may attain heights of up to 40 m (130 ft) in the wild, though more commonly and in cultivation is around half that height, with a stout trunk supporting a densely branched crown, in young trees pyramidal-shaped, with age becoming rounded. The bark is grey or reddish-brown and flaking.

Leaves are elongated-oval with a pointed tip, 8 to 20 cm (3 to 8 in) long, on top light green or dark green, depending on the variety, underneath rusty brown. They remain on the tree in all seasons, alternately arranged and drooping along the ends of the branches.

The flowers are white, five-petaled with long stamens and large, around 6 cm (2.4 in) long by 2 cm (0.8 in) wide. They bloom in the dry season, borne in drooping clusters arising at nodes along the branches. Opening in the late afternoon, they give off a robust sour-milk-like odour so as to attract bats, the tree's specialist pollinators.

Fertilised flowers develop into roundish to oblong green fruit with thick, tough rind armed with stout, sharp-pointed spines. Hanging from the branches on strong stalks needed to support their size, they may be up to 40 cm (16 in) long and weigh up to 8 kg (17 lbs), though they are usually around half that length and weight. They mature about three to five months after fruit-set, then self-detach and fall to the ground, where they land with a thud.

Mature fruit may be green or yellowish, depending on the variety, and split along longitudinal lines into three or four segments. However, force is needed to pull them completely apart. Inside each segment and shielded by the thick rind are large brown seed, each embedded in creamy- or yellow-coloured pulp of a custard-like consistency. At the mature stage, the fruit give-off a strong and lingering odour that some have described as reminding of smelly cheese.

There is a wide variety of Durian, and they differ in leaf and flower colour, fruit shape and size, fruit odour, and pulp colour and flavour. The least common are varieties with red flowers and red pulp. 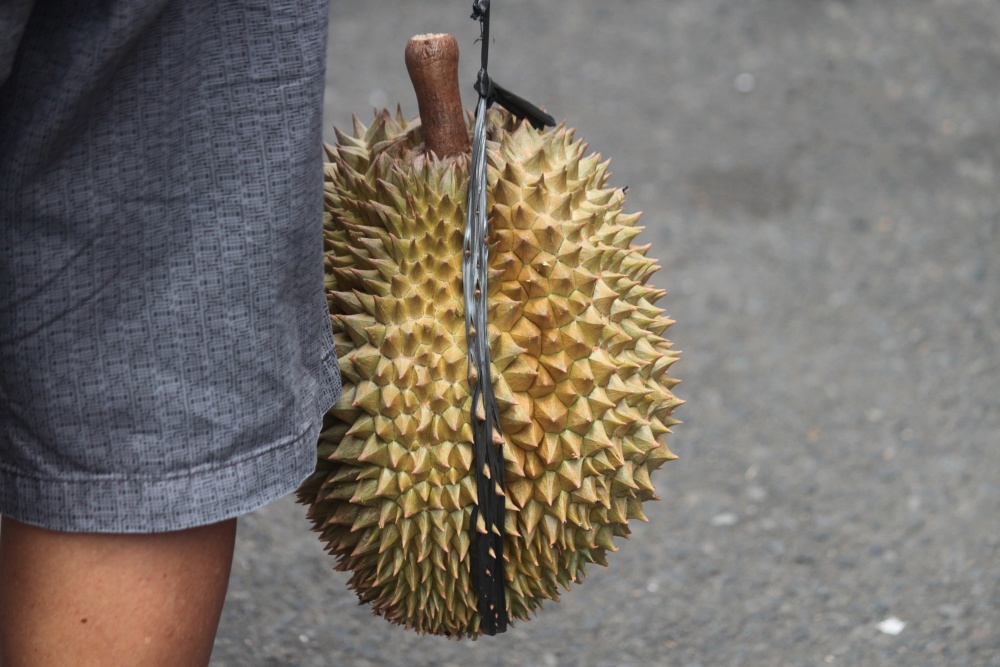 Photo by Mufid Majnun on Unsplash

Durian fruit is eaten mostly fresh-out-of-hand, the soft and melting custard-like pulp being the focus of attention and occasionally enthusiasm, especially among connoisseurs of the fruit. The taste is similar to rich vanilla custard with a hint of garlic, onion or cheese. The pulp is also incorporated in cakes, ice cream, and sticky rice desserts enriched with coconut cream.

The flowers produce an abundance of nectar, attracting bats and honeybees and producing dark amber honey with a fluid consistency and pleasingly sweet taste.

Durian trees produce a medium-weight wood that averages around 580 kgs per cubic meter (36 lbs per cubic ft) and has a low to moderate natural resistance to rot and decay. The heartwood is an attractive pink-brown to deep, red-brown. When available, it is sawn into beams and planks for light construction, joinery, panelling, and making plywood and furniture. However, the trees are not usually felled in areas where the fruit is eaten and has economic importance. 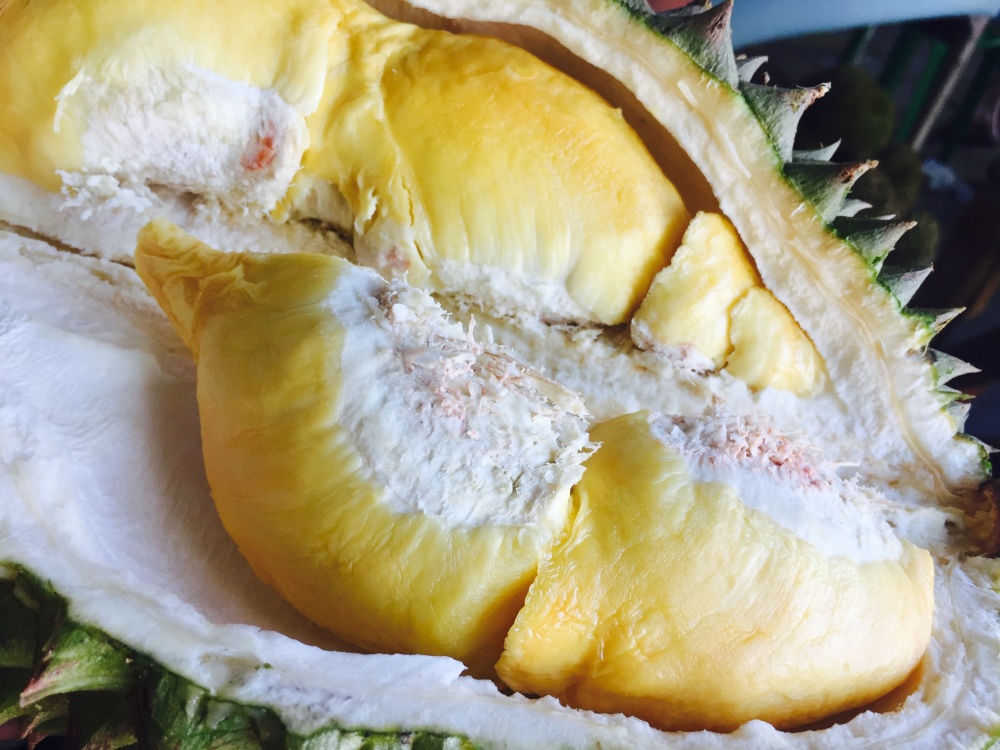 Photo by Gliezl Bancal on Unsplash 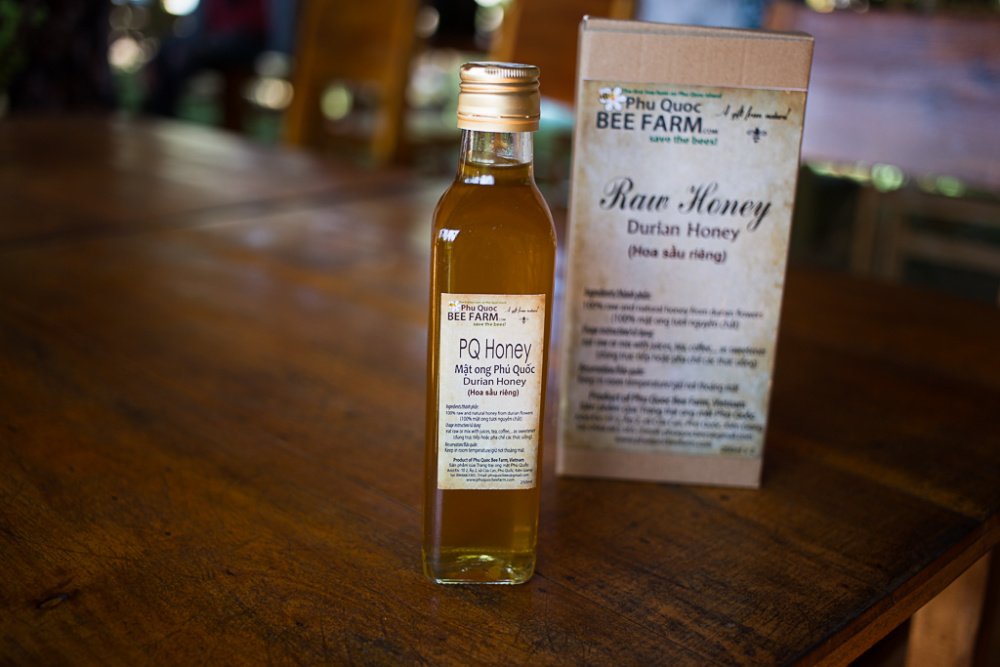 Durian pulp is a good source of folate, iron, niacin (Vitamin B3), potassium, carbohydrates and fibre.

Due to its strong odour, Durian is banned from many public spaces in Southeast Asia, such as on Singapore's public transport network and from airports, aeroplanes and hotels.

Durian grows and fruits naturally in humid tropical climates, generally in frost-free areas with annual lows of 19 to 25°C, annual highs of 27 to 35°C, annual rainfall of 1400 to 5000 mm and a dry season of 3 months or less. However, durian trees may fail to flower and fruit, or do so poorly, in areas where the average low of the coldest month is below 15°C (59°F).

Durian is also cultivated with irrigation in areas having a dry season lasting up to 5 months, such as in Darwin, Australia. When grown under drier-than-normal conditions, the trees benefit from a micro-climate where irrigation can be misted over the top of their canopy.

New plants can be started from seed, but seedling plants do not come true to type, so vegetative propagation is preferred when selected varieties are to be cultivated.

The best results have been grafting cuttings of select varieties onto ordinary seedling rootstock. The seed lose their viability quickly and should be sown soon after extraction from the pulp. Ideally, they are sown in a container with a free-draining potting mix and are then tended in a nursery under light shade. When around 50 cm (1.6 ft) tall, the seedlings are topped and grafted with cuttings from selected varieties.

Durian trees perform best on free-draining clay-loam, loam, sand-loam and loamy-sand soils of a moderately acid to neutral nature, generally with a pH of 6.0 to 7.5, and on sites with full to partial sun exposure. However, the young plants need shade for the first few years to prevent sun-scorching. And it is common practice to plant them under a fast-growing, short-lived perennial, such as Banana (Musa acuminata).

In areas with a bimodal climate (two rainy and dry seasons per year), flowering and fruiting usually follow after each dry period, such as occurs in parts of its native range.

Durian fruit deteriorate quickly after harvest, their shelf-life being only a few days. However, this can be extended for up to two weeks if kept in cold storage at 10 to 15°C (50 to 60°F).

Durian has been recorded as having escaped cultivation. However, there does not appear to be any record of it anywhere as a serious weed or invasive species.