However, there is considerable uncertainty over the different types or forms that occur there, in terms of the extent of their distribution, their climate adaptation and whether they should continue to be treated as a single species, or be divided into separate species. Because of this uncertainty, this description is limited to the types that occur within the area of the Department of Santa Cruz, in southern Bolivia, extending to as far south as the state of Mato Grosso do Sol, in Brazil.

It is a small- to medium-sized tree, 7 to 15 m (23 to 50 ft) tall, with a straight trunk up to 40 cm (1.3 ft) in diameter supporting a densely leafy pyramidal crown. The bark is dark brown, lightly flaking and when wounded exudes a sticky yellow latex.

The leaves are lance-shaped, 10 to 20 cm (4 to 8 in) long, pinkish-bronze or reddish when they emerge, ageing to lime green then dark glossy green and have a leathery texture. They are arranged in pairs along the ends of the branches and remain on the tree throughout the year.

The flowers are small, four-petaled, white with erect stamens and either perfect (with both female and male parts) or male. They are borne singly or in groups of up to twenty arising at nodes along the branches and come into bloom from winter to spring, coinciding with the dry season in its native range.

The fertilized flowers are followed by oval fruit up to 5 cm (2 in) long, nippled at the stem end, green when young becoming bright orange when ripe. They ripen in summer, around four to five months after fruit-set and have a leathery rind enclosing juicy, white, aromatic pulp that is clinging to a large, occasionally two, brown seed. 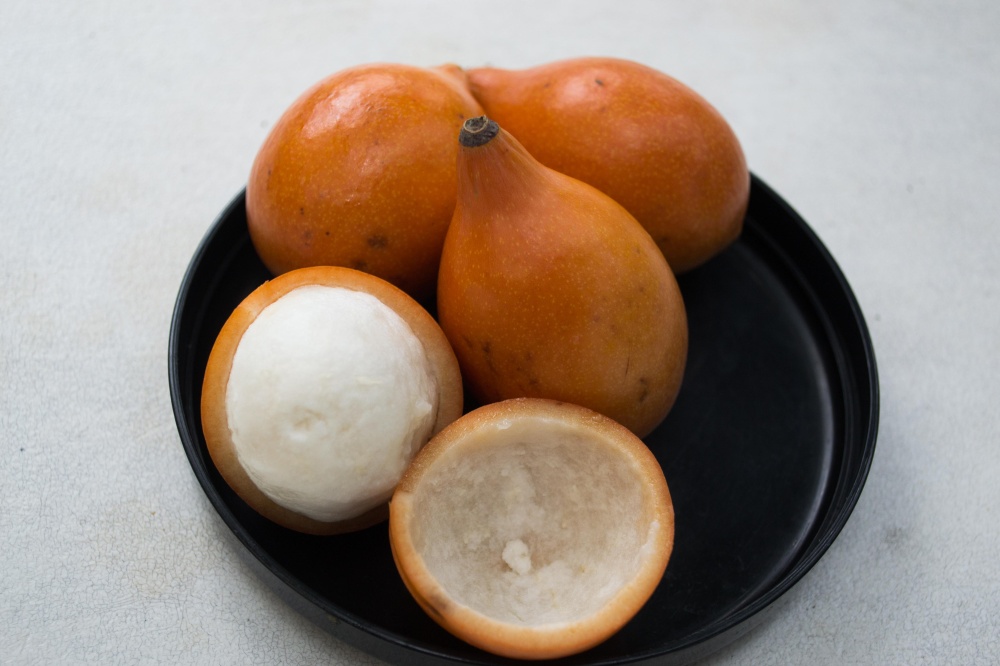 The fruit are eaten fresh out-of-hand by cracking the leathery rind with the fingernail then peeling it away to access the pulp, which is sucked away from the seed in the mouth. The texture is melting, juicy and the flavour unique and pleasingly sour yet sweet, reminding of a cocktail of tropical fruit, including passion fruit, pineapple and mango. When in season and abundant, Achachairu pulp is used as a flavouring for ice cream, popsicles, jam and even liquor.

The rind is also packed with a fruity flavour and can be made into a refreshing drink or granita base by blending it with cold water, leaving to infuse overnight and then straining and sweetening the remaining liquid, which takes on the orange colour of the rind. Some low-calorie recipes suggest using Stevia (Stevia rebaudiana) as the sweetener instead of sugar and adding fresh mint or ginger for extra zing.

The name Achachairu comes from the indigenous GuaranÃ­ language and means 'honey kiss'. Each year in December, in the city of Santa Cruz de la Sierra, in Bolivia and at the height of Achachairu season, a festival is held to honour the fruit harvest, with the markets and streets packed with vendors selling the fruit.

Grows naturally in humid subtropical and tropical climates, generally frost-free areas with annual lows of 16 to 25°C, annual highs of 26 to 35°C, annual rainfall of 1200 to 4500 mm and a dry season of 4 months or less, extending to 7 months with irrigation.

New plants are usually started from seed, which remain viable for only a short time and are best sown fresh in a free-draining potting mix, soon after removal from the fruit. Seedlings plants need tending in a nursery under 50% shade until they are ready for planting out when about 50 to 80 cm (1.6 to 2.6 ft) tall.

Performs best on organically rich, free-draining clay-loam, loam, sandy-loam and loamy-sand soils of a moderately acid to neutral nature, generally with a pH of 5.5 to 7.5.

Newly planted seedlings need light shade for the first few years to prevent sun-scorching and it is common practice to plant them under a fast-growing, short-lived perennial such as Banana (Musa acuminata). Seedling trees start bearing fruit when about five to ten years old and mature trees produce from five hundred to a few thousand fruit per year, depending on the size of the tree and the growing conditions.

Large Achachairu plantations have been established in Australia, near the town of Giru in the tropical north of the continent. The trees there are irrigated during the dry season, which can last up to six months.

There does not appear to be any invasive or other problem features associated with this plant.