Known by many local names, this spinach plant has long been cultivated in tropical Africa, India and Southeast Asia, but its precise origins are unknown.

It is an annual or biennial herb consisting of soft, succulent stems 3 to 5 m (10 to 16 ft) long, much-branched and vine-like, twining and climbing up and over structures. There are two known varieties in cultivation, the more common with green stems and leaf stalks, the other wine red.

Leaves are broadly oval to heart-shaped, 7 to 15 cm (2.8 to 6 in) long, dark glossy green, embossed, thick with a fleshy texture and alternately arranged along the vine.

Flowering is induced by shortening days from autumn to winter. The flowers are small, white or pink depending on the variety and borne on short spikes arising at the leaf bases. They are bisexual, with both female and male parts. Fertilised flowers are soon followed by small round berries, 7 mm (0.3 in) in diameter, ripening to dark purple or near black with juicy pulp surrounding a single large seed.

The young stems and leaves are versatile in their use and can be eaten fresh in salads, steamed like spinach, stir-fried, or used as a green vegetable in soups, casseroles and stews. They have a taste similar to spinach but more subtle. When cooked for a while, they develop a mucilaginous or slimy quality like okra (Abelmoschus esculentus), which can serve as a thickener to give sauces body.

The red juice from the ripe fruit is used as a food colouring in unheated medicinal preparations and foods, such as chilled dairy desserts. It is also used as a facial rouge in cosmetics.

The vines are ready for harvesting six to eight weeks after sowing and are productive. A single vine produces around 1.5 kgs (3 lbs) of fresh leaves and young shoots over six months. Frequent harvesting of young shoots and leaves at weekly intervals delays flowering and stimulates new growth. 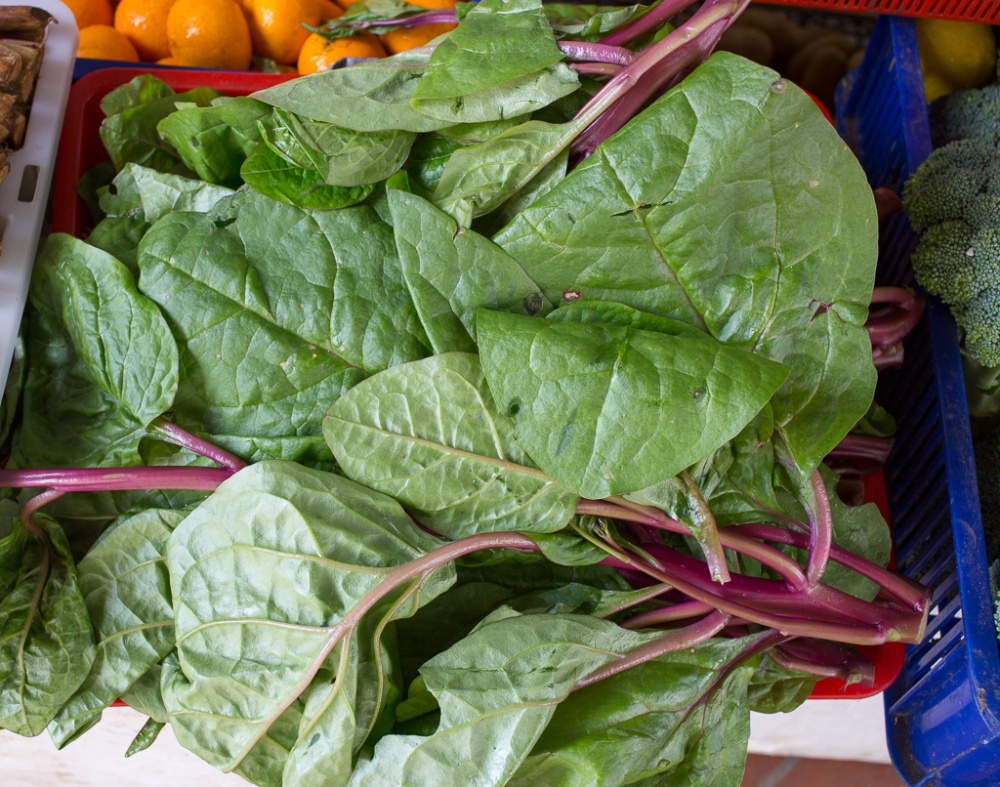 The young shoots and leaves are high in magnesium, calcium and zinc.

Grows naturally in humid subtropical and tropical climates, generally frost-free areas with annual lows of 10 to 25°C, annual highs of 20 to 35°C and annual rainfall of 800 to 4500 mm.

Growth and leaf production slows where the average low of the warmest month falls below 16°C (63°F), such as in tropical highland areas above 1000 m (3300 ft) elevation.

New plants are started from seed or cuttings. The seed are sown in seed trays or containers near the end of the dry season, and the seedlings then transplanted to prepared beds at the start of the rainy season.

Alternately, cuttings taken at the start of the rainy season are planted directly in the beds but need shading until they set root and start to grow. As the vine grows, it is best supported on a trellis or similar structure to keep the leaves off the ground, free of dirt and make harvesting them easier.

It grows best and is most productive during the warm rainy months when most other vegetable crops perform poorly. Vines start to lose vigour after around six months and tend to die back after twelve months. However, they may only grow annually in subtropical or tropical areas with a pronounced dry season.

Birds eat the fruit and disperse the seed outside of cultivation, where they germinate readily. It is listed as a weed in more than one reference publication and is assessed as a high weed risk species for Hawaii by the Hawaii Pacific Weed Risk Assessment (HPWRA) project.