Cork oak is a long-lived, semi-evergreen tree originating in the Mediterranean region, its natural range extending from Portugal, through Spain and North Africa, to southern coastal France and Italy. As its name suggests, it is the source of commercial cork, which comes from its bark.

The leaves are small and oval, 2 to 8 cm (1 to 3 in ) long, serrated on the margins, on top dark glossy green, underneath dull grey. They remain on the tree in all seasons, though some leaf fall occurs during periods of extreme dry or cold.

Flowers small and insignificant, yellow, either female or male on the same tree and held in catkin-like clusters arising at the ends of the branches. They bloom in spring, at which time the male flowers release their pollen that then gets carried on the wind to pollinate the female flowers.

The fertilised female flowers develop into a hard nut known as an acorn, which is dark green, egg-shaped and half-covered by a bowl-shaped cap. Enclosed is a single, oil-rich seed, though there may occasionally be two or even three seed inside. 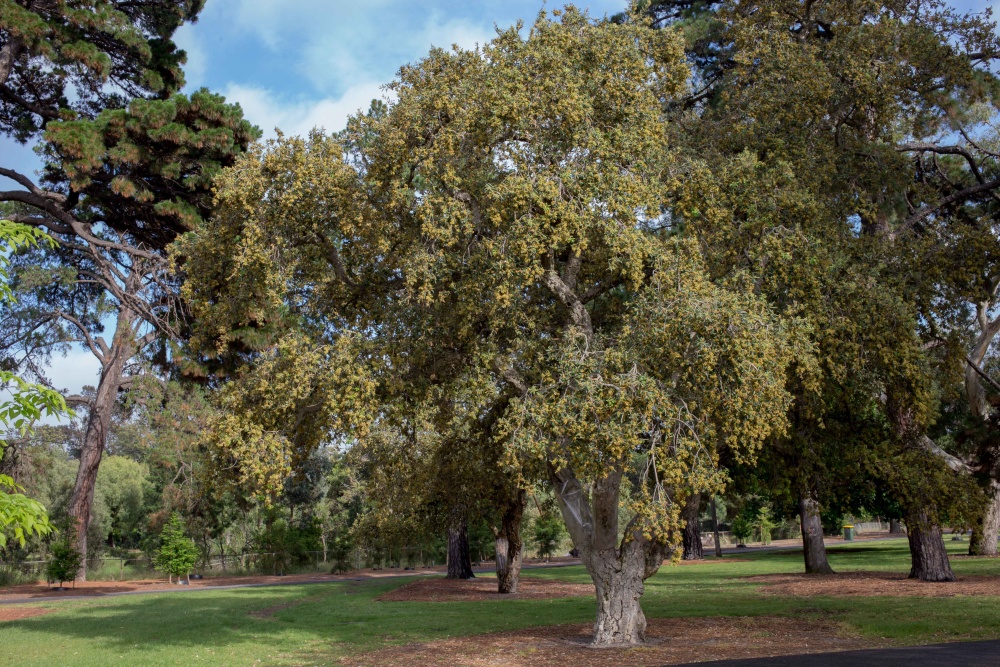 Cork oak bark has been harvested for centuries as commercial cork, traditionally for making cork stoppers to seal bottles filled with liquids such as wine and olive oil.

Nowadays, cork is used to make bottle stoppers and a diverse range of products, including panels for heat and sound insulation, friction and vibration pads, seals, and buoyancy material for flotation devices, including surfboards. Cork is lightweight, weighing around 225 kgs per cubic meter (14 lbs per cubic foot), which is lighter than water and therefore floats. Only Balsa (Ochroma pyramidale) is lighter at 128 to 192 kgs per cubic meter (8 to 12 lbs per cubic ft).

Granulated cork, made from leftover material, for example, cork stopper manufacture, is combined with rubber from the Rubber tree (Hevea brasiliensis) to make cork/rubber composites that are lightweight, compressible and flexible. Easily moulded and shaped, they are made into sealed gaskets used in automotive engine blocks, vibration pads, oil retainers, polishing wheels, roll coverings, linoleum for floor coverings, shoe soles and packaging for perishables products such as fruit.

Although cork stoppers represent only 15 to 20% of cork usage by volume, it accounts for 75 to 80% of its market value.

The acorns can be roasted and eaten but are more usually left to fall to the ground to be foraged by pigs. Acorn-fed, Black Iberian pigs found in Spain and Portugal produce one of the world's most prized and expensive hams. Known locally as 'Jamon iberico', its reputation and popularity have spread worldwide.

Cork oak is sometimes planted in urban areas as an amenity, street or shade tree. 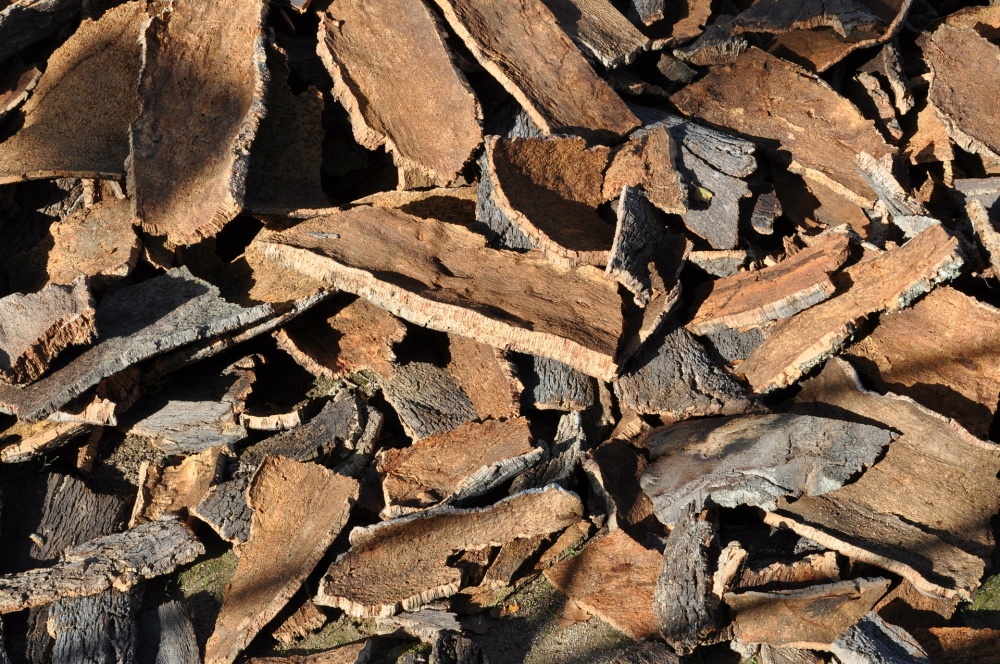 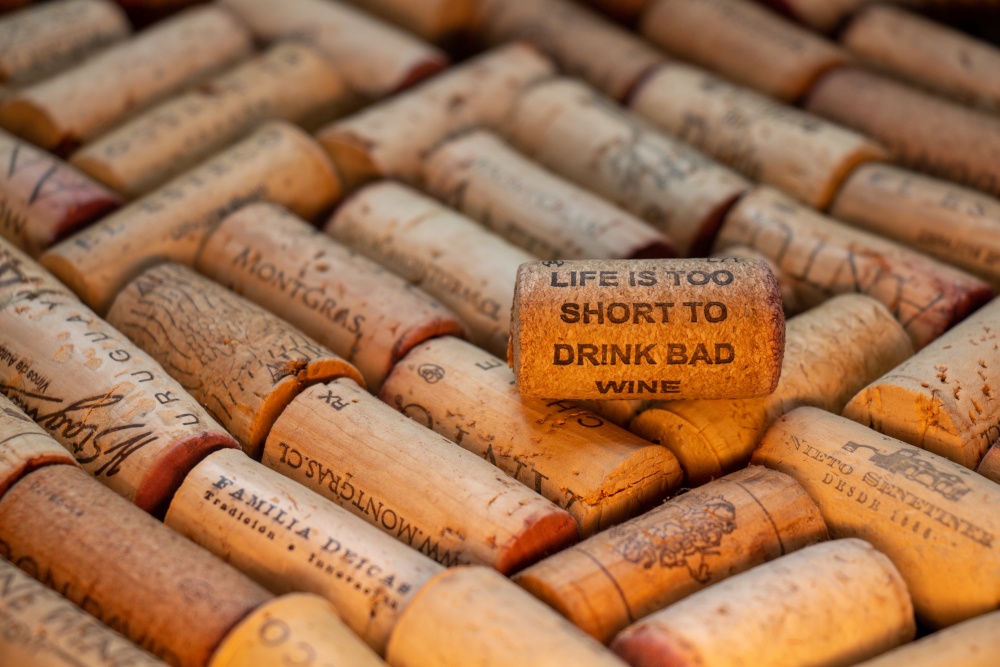 Cork oak grows naturally and produces quality cork in Mediterranean climates, generally areas with annual lows of 6 to 17°C, annual highs of 19 to 32°C, annual rainfall of 600 to 1100 mm and a summer dry season of 7 months or less, extending to 12 months with irrigation or groundwater.

Although Cork oak trees also grow well in areas with uniform and summer rainfall - such as Eureka, California, London, England (e.g. the Chelsea Physic Gardens), Wellington, New Zealand, Kruger National Park, South Africa, and Australia, in Melbourne, Hobart and Tenterfield - the quality of the cork produced is inferior to cork coming from areas with a distinct summer dry season. And wet conditions at the wrong time also make the tree more susceptible to disease.

The best quality cork comes from warm Mediterranean regions with a pronounced summer dry season and average highs of the warmest month above 25°C (77°F). Slow rates of bark growth, caused by low availability of water during the active growing season, results in a fine-textured cork with a dense cell structure, suitable for making high-value products such as cork stoppers for wine and champagne bottles.

New plants are usually started from acorns that benefit from being soaked in water for a couple of days to improve their germination. Any acorns that float are discarded, leaving only the healthy acorns that are then sown directly in the soil where the tree will grow. Direct sowing allows the seedlings to develop a good root system quicker than if transplanted, thereby increasing their chances of surviving their first dry summer season.

Performs best on deep, free-draining loam, sandy-loam, loamy-sand and gravelly soils of a moderately acid to neutral nature, generally with a pH of 5.0 to 7.0, and on sites with full to partial sun exposure. Cork oak trees are tolerant of drought conditions but intolerant of excessive moisture, which increases the tree's suitability to disease and may also cause the bark to rot.

Cork trees are first harvested when around 25 years old. After that, they are stripped of their bark once every 9 to 12 years. And because the trees live for up to 150 years, they can be harvested around 12 times over their lifetime. Easily peeled away, the bark can be harvested in one piece. Underneath the gnarly surface is the pale red-brown, corky and spongy layer that is the cork of commerce.

Cork trees produce on average 40 to 60 kgs (88 to 132 lbs) of useable cork. Before making anything with it, the cork must be dried for a couple of months, then boiled to soften it, make it more flexible and kill any insects.

Although most cork comes from natural forests, the highest concentrations of trees are in plantations, such as those in São Brás de Alportel, in the Algarve region of Portugal.

Cork oak pollen is known to cause allergies or hay fever in some people.

The spent flowers and fallen acorns are known to produce litter.