Jackfruit is believed to have originated in the rainforests of the Southern Ghats mountains in south-west India. From there it was introduced to other subtropical and tropical regions around the world and is today perhaps the most widespread of the Artocarpus, a family of fruiting trees that includes the Breadfruit (Artocarpus altilis) and Marang (Artocarpus odoratissimus).

A medium-size tree, it is typically 10 to 20 m (32 to 65 ft) tall with a straight, stout trunk supporting a densely branched crown, in young trees pyramidal-shaped, with age becoming more wide-spreading. The bark is dark grey, often mottled and on wounding yields a sticky white latex, as do all other parts of the tree.

Leaves large, up to 23 cm (9 in) long, deeply lobed on seedlings, changing to oval-shaped on mature trees, thick, leathery and dark glossy green. They remain on the tree in all seasons and their dense arrangement casts a deep shade.

Flowers small and insignificant, held in tightly-packed, club-shaped clusters of male or female flowers on the same tree, but on different parts of the tree. The male clusters arising on new wood near the ends of the branches and above the female clusters, which arise on old wood, mainly on the bottom branches, the trunk and sometimes on the exposed roots.

The fertilized flowers are followed by very large, oblong or pear-shaped fruit with thick, rough, warty green rind. The world's largest fruit, they range in length from 30 to 90 cm (1 to 3 ft) and typically weigh from 5 to 25 kg (11 to 50 lbs), though they may weigh up to 50 kg (110 lbs) and hang on strong stalks from the lower branches and trunk.

As the fruit matures, the rind becomes greenish- to brownish-yellow and the whole fruit gives off a strongly musky aroma, indicating its ripeness. Beneath the rind is a fibrous central core, around which are numerous, large oblong seed, each embedded in the cavity of a bulb-shaped segment of firm, yellow to orange coloured pulp. There may be hundreds of seed in a single large fruit.

There are many varieties of Jackfruit, based on fruit shape and size, pulp colour and flavour, time to the start of bearing and time to maturity of the fruit, but they more generally divided into two main types, those with soft pulp and those with crisp pulp.

The pulp is sweet, rich and fragrant, with a banana-pineapple flavour when ripe and with a soft or crunchy texture. It is mostly eaten fresh out-of-hand or added to fruit salads. Its low water content also enables it to be deep-fried to make chips or crisps, now a popular snack-food widely packaged and available under various brand names. The ripe pulp is also used to flavour ice-cream and to make chutney, as well as jam and jelly.

A wine is also made from the ripe pulp, first by pureeing it then adding boiled water, sugar, a cinnamon stick and yeast. This mixture is then poured into an earthenware container, covered with a cloth and lid, and allowed to sit for about two weeks to properly ferment. After fermentation, the liquid is strained into sterilised bottles. The resulting wine has an alcohol content of about 8% and is  said to be mildly acidic with a fruity taste. Only the ripe pulp is used in the process, the central core and fleshy strands connecting the pulp segments are usually discarded along with the rind.

The pulp of green or unripe Jackfruit is commonly used in vegetable curries in South India and the Caribbean, and because the pulp appearance and texture is similar to that of lobster meat, it is often referred to as mock-lobster curry. To prepare the curry, young or unripe fruit are cut into pieces and boiled until soft, they are then left to cool before the pulp is extracted and shredded. The soft, shredded pieces are then added to a coconut curry near to the end of the cooking process. In Western cuisine, the shredded pulp is more often used as a pulled-pork substitute.

The large seed are also edible and are usually boiled or roasted first before eating. They are said to have a texture and taste similar to that of chestnuts. A gluten-free flour or meal can also be made from them and this, when mixed with other flours, can be used in baking.

The milky latex when heated can be used as a glue for mending broken crockery and is also a substitute for chicle used in making chewing-gum. Chicle is mainly sourced from the Sapodilla tree (Manilkara zapota).

The young leaves are palatable to livestock and have a crude protein content of around 15% of their dry weight.

Jackfruit trees are known to withstand hurricane force winds, which makes it an excellent choice for a windbreak.

The fruit pulp contains high levels of Vitamins A, B1 (Thiamine), B2 (Riboflavin), B3 (Niacin), and C. 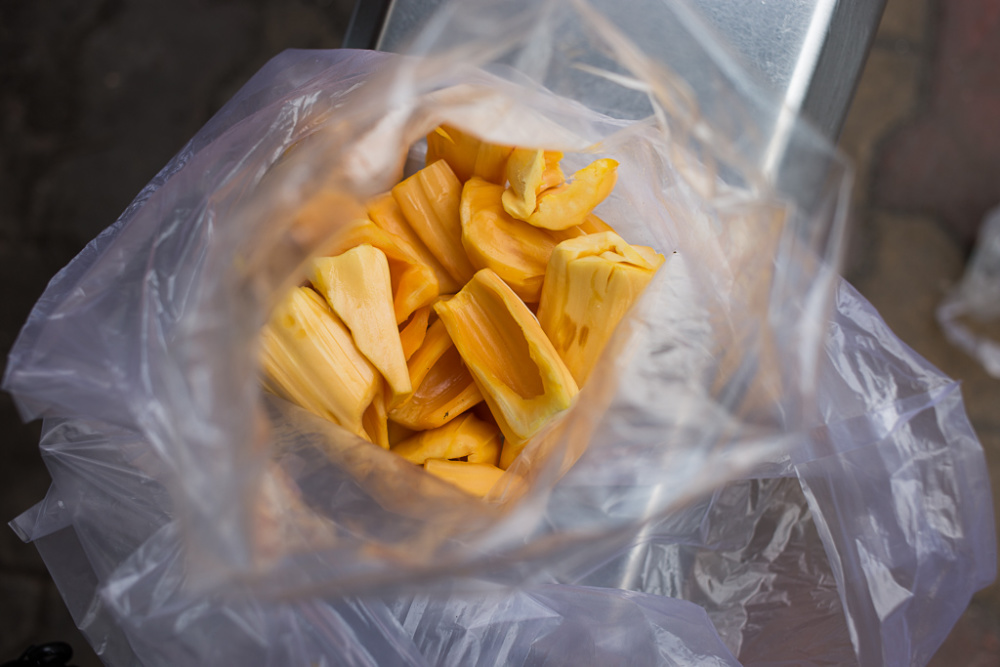 Grows naturally and produces flavoursome fruit in humid subtropical and tropical climates, generally frost-free areas with annual lows of 15 to 25 °C, annual highs of 24 to 35 °C, annual rainfall of 1200 to 4500 mm and a dry season of 5 months or less, extending to 9 months with irrigation.


In southern India, Jackfruit trees produce flavoursome fruit at elevations from near sea level up 1300 m (4300 ft), where the average low of the warmest month is 18 °C (64 °F) or higher. At higher elevations, the fruit are of poor quality and mostly only suitable for cooking.

New plants can be started from seed, but seedlings do not come true-to-type, so vegetative propagation is preferred when selected varieties are to be cultivated. Air-layering (circumposing) and grafting selected varieties onto seedling rootstock are the propagation techniques mostly used by professional horticulturists. Care should be taken when transplanting seedlings to not damage or bend the long taproot.

Jackfruit trees perform best on fertile, free-draining clay-loam, loam, sand-loam and loamy-sand soils of a moderately acid to slightly alkaline nature, generally with a pH of 5.0 to 8.0, and on sites with full to partial sun exposure.

Jackfruit is assessed as a low weed risk species for Hawaii and Florida, respectively by the Hawaii Pacific Weed Risk Assessment project (HPWRA) and the IFAS Assessment of Non-Native Plants in Florida's Natural Areas.