Brush box is an ornamental, timber and honey tree originating in Australia.

Its natural range is limited to the east of the Australian continent, to coastal parts extending from Newcastle in New South Wales to near Mossman in Tropical North Queensland. It occurs mainly where open woodland meets the rainforest.

The trunk is usually straight and clear of branches for up to half the tree height, supporting a compact, densely leafy rounded or pyramidal crown that becomes wide-spreading with age. The bark is grey-brown and flaking, revealing smooth pink-brown to orange-brown underbark.

Leaves are elongated oval, up to 15 cm (6 in) long, tapered at both ends and to a fine point at the tip. They are dark glossy green on top, paler and duller underneath, clustered towards the ends of the branches and remain on the tree in all seasons.

Flowers are small, white with five petals and prominent, frilly stamens. They are borne in clusters of three to eight at the base of the leaves and come into bloom from spring through summer, though the dense foliage may partly obscure them. 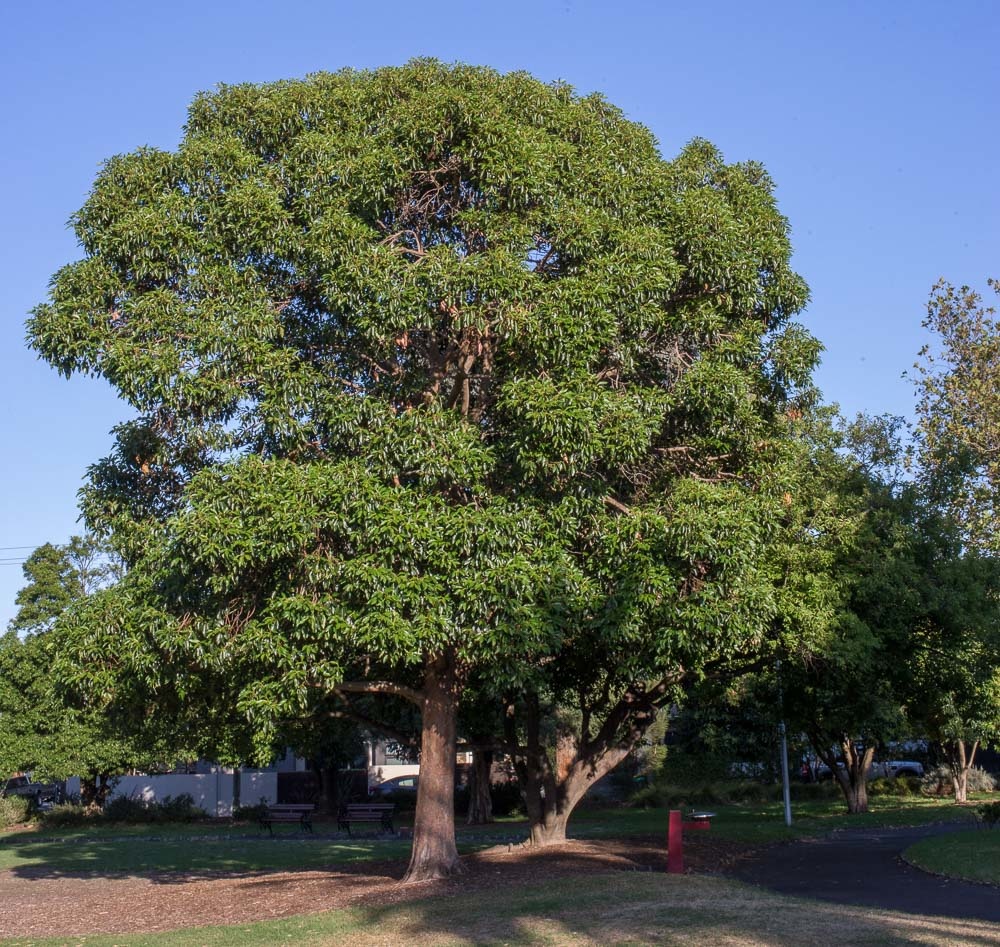 Brush box is a commonly cultivated street and urban landscape tree for its shapely form, densely leafy crown and interesting and colourful bark.

It is a major honey tree in its native Australia, with nectar flows peaking every three to four years. Yields are from 27 to 135 kgs (60 to 300 lbs) of honey per colony per season, depending on the year. The honey is extra white to light amber, sweet with intriguing star anise and citrus tones, and granulates quickly to a whitish grain. Although it sets to a tough candy consistency over time, warming will return it to its liquid state. The flowers are also a valuable source of pollen for brood-rearing honeybees.

The sapwood is pale brown and demarcated from the heartwood, which is pinkish-brown with a somewhat wavy grain but lacks any prominent figuring. It is a tough, hard and heavy wood in the 745 to 965 kgs per cubic meter (47 to 60 lbs per cubic ft) range and has moderate natural resistance to rot, decay and wood-boring insects. It also has exceptional wearing properties. This puts it in the durable hardwood class, suitable for indoor and outdoor construction.

Well-formed logs are sawn into beams and planks used in heavy construction, including bridge and wharf construction, boat-building, house construction, railway sleepers, heavy-duty flooring, decking and outdoor furniture. It is also an excellent fuelwood, suitable for firewood and for making charcoal.

When broken or snapped, the twigs exude a milky sap that has the smell of vinegar, giving rise to one of its common names, 'Vinegar tree'.

Grows naturally in sub-humid to moderately humid subtropical and tropical climates, generally areas with annual lows of 8 to 20°C, annual highs of 18 to 30°C, annual rainfall of 600 to 2000 mm and a dry season of 6 months or less.

New plants are usually started from seed, which remain viable for years stored under cold, dry, air-tight conditions. The seed are sown in containers with a free-draining potting mix, and most germinate within ten to fourteen days. Seedlings are cared for in a nursery for around nine to twelve months, after which they should be ready for planting out.

Performs best on free-draining clay-loam, loam sandy-loam and loamy-sand soils of a moderately acid to slightly alkaline nature, generally with a pH of 5.5 to 7.5, and on sites with full sun exposure.