Although commonly associated only with southern China, the natural range of this well-known fruit tree extends beyond China into neighbouring Vietnam and the Philippines.

It is typically a small to medium-sized tree 8 to 15 m (26 to 50 ft) tall, with a single or occasionally forked trunk supporting a densely leafy, rounded crown. However, some varieties may reach up to 25 m (82 ft) tall. The bark is grey-brown and slightly rough.

The leaves are compound, made up of four to ten oval to lance-shaped leaflets, each 5 to 8 cm (2 to 3 in) long and arranged in pairs along the length. They emerge bronze-red, become lime green, then dark glossy green with a soft, leathery texture and remain on the tree in all seasons.

The flowers are small, creamy-white and borne on branched clusters at the ends of the branches. They are unisex, with separate female and male flowers in the same cluster and bloom in spring. Fertilised flowers develop into round to egg-shaped fruit, 2.5 to 4 cm (1 to 1.6 in) long depending on the variety, with thin, warty green skin, becoming pink-red to red when ripe. The pulp is near white, juicy and surrounds a single oval, glossy brown seed. 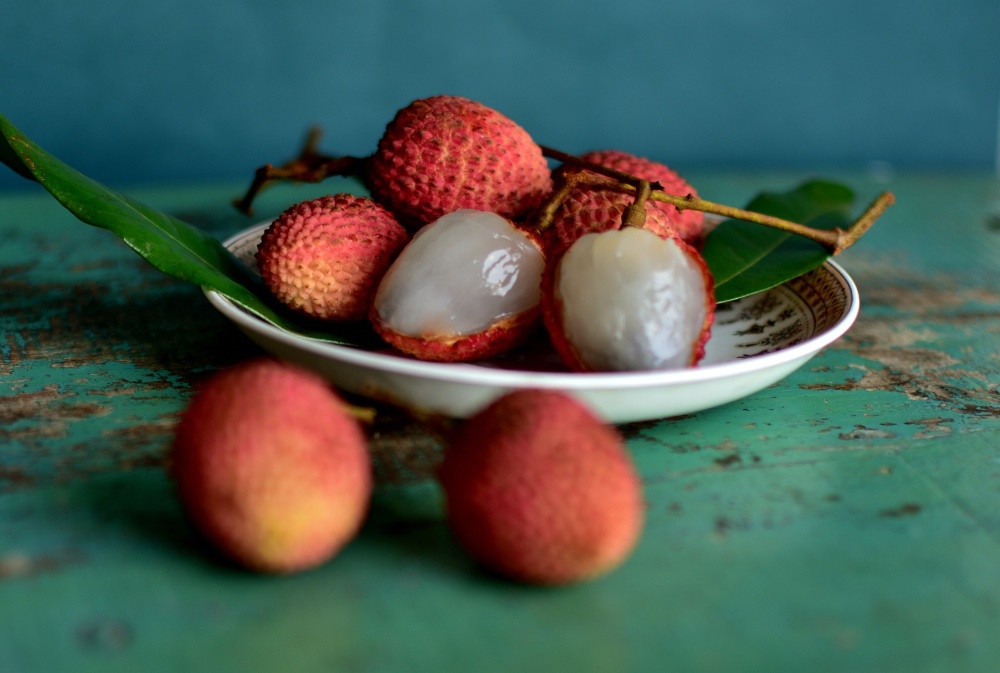 Lychee is cultivated for its fruit, which are at their best when eaten ripe and fresh out-of-hand. The thin, brittle skin is easily peeled and the pulp is eaten after removing the seed, which is not edible and is discarded. The pulp is juicy, smooth, melting and has an agreeable sweet-acid flavour. Besides being eaten out-of-hand, the pulp is used to flavour chilled drinks, dairy desserts, such as ice cream and yoghurt, and fruit sauces. The surplus pulp is commonly canned in syrup, mostly in China and India, or is dried or pureed and frozen.

It is reported as a major honey plant in China, India, Mauritius, Thailand and Taiwan and as a minor honey plant in South African and Florida. Yields are moderate and range from 7 to 27 kgs (15 to 60 lbs) per colony per season. The honey is lightly golden, sometimes with a reddish tinge, or dark in dry years and slightly acid in flavour. After several months it starts to granulate to a medium grain.

Lychee cultivation is best suited to humid subtropical climates, generally frost-free areas with annual lows of 11 to 21°C, annual highs of 23 to 33°C, annual rainfall of 1000 to 4000 mm and a dry season of 4 months or less. Lychee trees may fail to flower and fruit or do so poorly in areas where the average low of the coldest month is above 16°C (61°F).

Lychee is also cultivated with irrigation in areas with low rainfall and a long dry season. Most lychee cultivation in India is with irrigation, with Muzaffarpur, in Bihar state, which experiences a dry season of 7 months, the centre of cultivation.

When conditions are drier-than-normal during flowering, the trees benefit from a micro-climate where irrigation can be misted on them over the top of their canopy.

Less common are tropical lowlands varieties, such as 'Kom' (or 'Khom'), 'Luk Lai', 'Sampao Kaow', 'Kalake Bai Yaow' and 'Red China', all of which originate from Thailand. These varieties produce fruit in climates warmer than described above, but lack the depth of flavour of the cool climate varieties and as such may not be as widely appreciated.

New plants are usually produced vegetatively (using air-layering or circumposing techniques) because seedling plants start to bear fruit much later and may not come true to type. Seedling plants are instead used mostly as rootstock onto which selected varieties are grafted.

The seed lose their viability quickly and should be sown within a few hours of being extracted from the fruit, as they are unlikely to sprout after they have started to dry. Seedlings grow quickly and develop a long taproot that will become root-bound if kept in a container for too long.

Performs best on rich, deep, free-draining clay and loam soils of a moderately acid to slightly alkaline nature, generally with a pH of 5.0 to 7.5, and on sites with full to partial sun exposure. It has poor tolerance to slow-draining and strongly alkaline soils.

The seed germinate readily but are large are not easily dispersed. Despite its widespread introduction and cultivation, there does not appear to be any reports of it becoming a serious weed or invasive species.

It is assessed as a low weed risk species for Hawaii and Florida, respectively by the Hawaii Pacific Weed Risk Assessment project (HPWRA) and the IFAS Assessment of Non-Native Plants in Florida's Natural Areas. However, it is reported as naturalised in northern and central India and Kruger National Park, in South Africa.

The overripe fruit fall to the ground, creating a messy litter.