It is a small tree up to 15 m (50 ft) in height, though it is typically between 5 and 10 m (16 and 33 ft) tall with a slim, straight trunk supporting a wide-branching crown. The bark is grey and fissured.

The leaves are large, up to 50 cm (20 in) long and made up of numerous tiny green leaflets in an intricate, twice-feathered arrangement. In the dry season, they fall off the tree to conserve water, leaving the branches bare until the rainy season arrives.

In spring, brilliant lavender-blue bell-shaped flowers bloom in clusters in stark contrast with the bare branches. Less common is a white-flowering variety.

The flowers develop into small disc-shaped, woody seed capsules that become dark brown and dry. When fully mature, they split open to release their seed, which are winged, designed for wind dispersal. 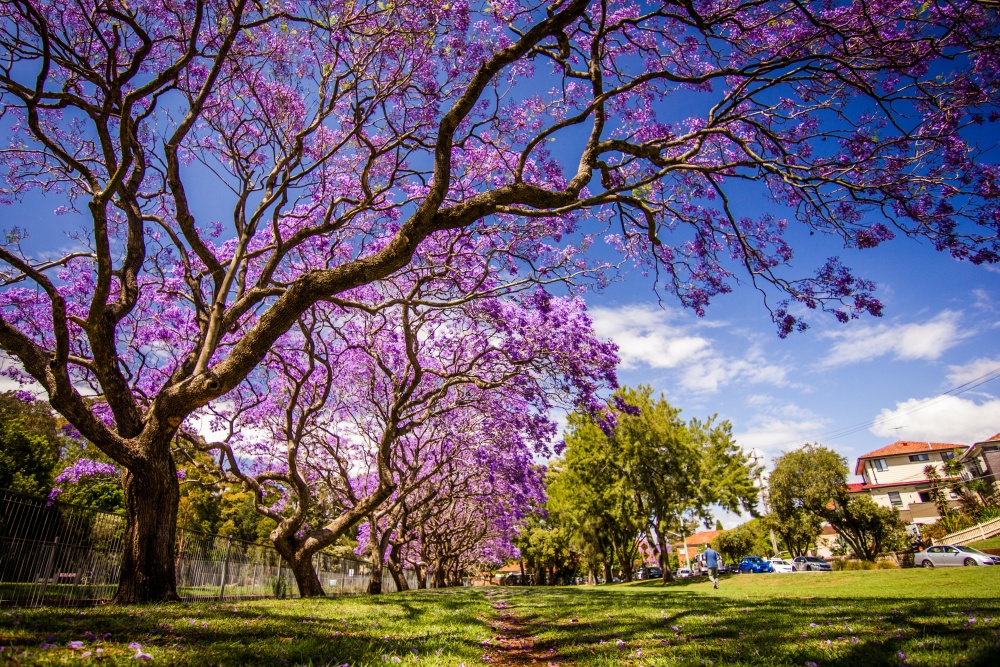 Jakaranda is widely cultivated in gardens and landscapes in subtropical and tropical climates for its spectacular flowering display.

The wood is yellow-white and light- to medium-weight, ranging from 450 to 700 kgs per cubic meter (28 to 43 lbs per cubic ft). Still, low natural resistance to rot and decay makes it generally unsuitable for outdoor construction. It is, however, easy to work and fine-textured and is suitable for general carpentry or cabinetry work.

Well-formed logs from large trees are sawn into planks for making cupboards, boxes and crates or are sliced into thin sheets for decorative veneer. The branch-wood and small-diameter roundwood is pulped for plywood and particleboard or is cut into lengths and dried for firewood.

Jakaranda trees need cool, dry conditions before flowering for good flowering to occur, with the best flowering displays found in sub-humid to moderately humid subtropical and tropical climates, generally areas with annual lows of 7 to 20°C, annual highs of 18 to 35°C, annual rainfall of 500 to 2200 mm and a winter or summer dry season of 3 to 8 months.

Although also cultivated in hot, humid climates with no dry season, flowering is usually sparse to patchy at best.

New plants usually begin from semi-hardwood cuttings or seed, which remain viable for up to twenty-four months under cold, dry, airtight storage. Trees from cuttings are preferred because they start to bloom at an earlier age.

Performs best on free-draining loam and sand soils of a moderately acid to alkaline nature, generally with a pH of 6.5 to 8.0, and on sites with full to partial sun exposure.

Jakaranda is recorded as a serious weed in at least one reference publication. Classed as a weed of agriculture in Australia, its weediness is partly due to its ability to disperse its seed on the wind over far distances. However, it is assessed as a low weed risk species for Hawaii and Florida, respectively, by the Hawaii Pacific Weed Risk Assessment (HPWRA) project and the IFAS Assessment of Non-Native Plants in Florida's Natural Areas.

Throughout the seasons, the spent flowers, leaves and seed capsules fall to the ground creating litter.