Water spinach is a close relative of Sweet Potato (Ipomoea batatas) but is cultivated for its succulent stems and leaves rather than its underground tubers.

Thought to have originated in Southeast Asia, it is widely cultivated in the region, especially in Vietnam, Thailand, Malaysia and southern China. It is also now cultivated and naturalised in India, Africa, Australia, the South Pacific and South America. Where cultivated, it is usually found sold in markets tied in bundles of between ten and fifteen plants.

As its name suggests, Water Spinach grows in wet environments and is a semi-aquatic perennial herb, with all parts of the plant being soft, succulent and green, though some wild forms have wine-red stems. There are two main types recognised, the upland type (formally Ipomoea reptans), which is adapted to moist soils and the lowland type, which is adapted to flooded conditions.

The stems are long, jointed, round and hollow and this in the lowland type enables the plant to float on water, leading to the formation of dense mats of floating vegetation. Where the stems make contact with water or soil, nodes along the length sprout roots that anchor the plant and allow it to take up nutrients.

Flowers are trumpet-shaped, around 4 cm (1.6 in) in diameter and white or pink with purple centres. In wild forms, they are wholly purple. Flowering occurs in winter, favoured by the short days and with the flowers arising solitary from the leaf axis. They are followed by small, round seed capsules enclosing two to four grey-coloured seed.

Water spinach is an important green vegetable in the diet of people in Southeast Asia, being eaten regularly either stir-fried, steamed or blanched. The young stem tips and leaves are also used in salads, battered and deep-fried or are  added to soups, stews and curries, sometimes even pickled.

A common but tasty way of cooking water spinach is to lightly stir-fry the young stem tips and leaves in garlic, chilli and soya sauce. Other variations of this popular Asian dish include adding onions, chillies, garlic, galangal, and either shrimp paste or squid as an ingredient. Regional favourites include Thai style stir-fried water spinach with oyster sauce and shrimp paste, Chinese style with bean-curd, hot bean paste and shallots, and in the Philippines, stir-fried water spinach with spicy pork or chicken.

The stems should be added first when cooking, as the leaves take only a few seconds to wilt. When stir-fried, the slippery texture of the leaves contrast nicely with the firmer stems and both have a slightly nutty, spinach-like flavour. Water Spinach retains its green colour when cooked, which helps brighten the presentation of the finished dish.

Older stems and leaves are tough and fibrous and are not suitable for cooking, but are highly palatable to livestock and in Southeast Asia are fed to pigs and cattle. The whole plant has a high protein content, which is around 19% of the dry weight but may be up to 34% for some parts of the plant. 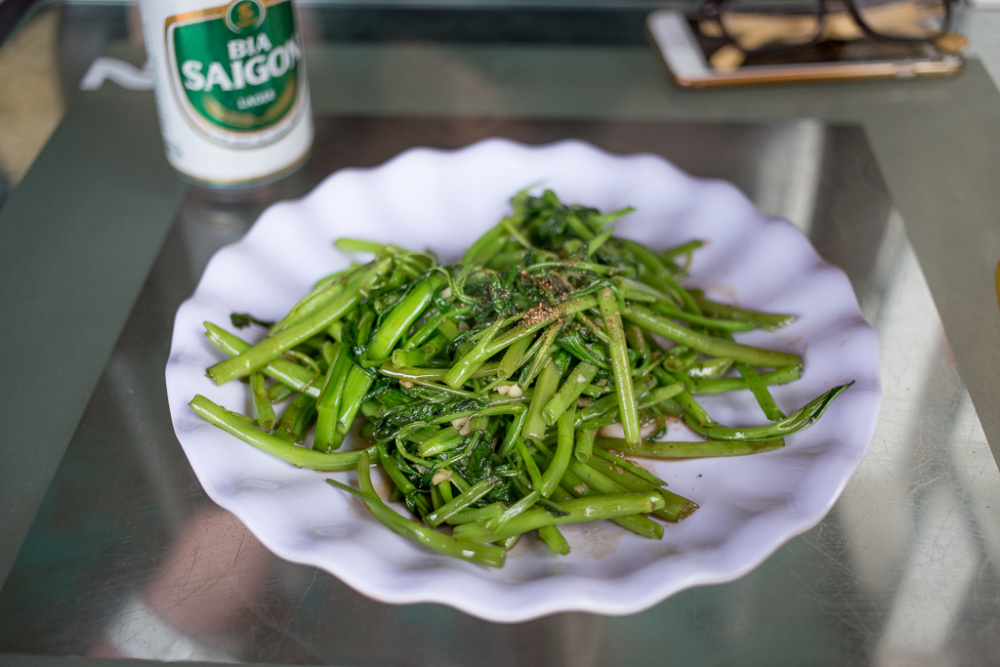 Grows naturally as a perennial in humid subtropical and tropical climates, generally frost-free areas with annual lows of 16 to to 25°C, annual highs of 26 to 35°C, annual rainfall of 2000 to 8000 mm and a dry season of 2 months or less.

Water Spinach is also cultivated with irrigation in drier climates and as well in much cooler climates but as an annual, as plants are damaged at temperatures below 10°C (50°F).


Water Spinach propagates readily from seed or stem cuttings. It grows very quickly under optimal conditions and is highly productive, with yields of up to 10 kg per sq meter (2 lbs per sq foot) reported for greenhouse cultivation, which is the preferred cultivation method in commercial operations because it keeps the plants clean and free from dirt.

Under soil cultivation, raised beds are constructed with irrigation or drainage channels on either side. Seeds are then sown in rows on top of the beds. When the plants have sprouted, urea and an organic fertiliser are applied and the soil kept moist. Cuttings may also be used for planting.

Under flood cultivation, the plants are planted in paddy fields either as cuttings or seedlings. Once the plants have established their root system and begin to grow they are then flooded, and the water level raised according to their stage of development. The water under this type of cultivation should not be saline or allowed to become stagnant.

Harvesting of water spinach can start two to three months after planting, and continue regularly thereafter. All parts of the young plants are eaten. However, older stems become fibrous, so young succulent stem tips are preferred. As a general rule, stem and leaves are always picked before the plant flowers to ensure a good eating quality. Harvesting should be carried out in the cooler part of the day to prevent wilting and the cut ends stood in a container with clean water.

The upland type performs best on moisture-retaining, clay-loam soils that have been enriched with organic matter and adjusted to a moderately acid to neutral nature, generally with a pH of 5.3 to 7.0. The planting beds should have full to partial exposure to the sun, ideally with some afternoon shade. An organic mulch is also recommended to help retain soil moisture.

Water Spinach is very fast-growing and in some countries, the lowland type is considered invasive or a noxious weed because it can quickly overrun wetland areas. A permit is required in Florida to grow water spinach, even in the home garden.