Logwood is a dye-producing tree legume originating in Central America, its natural range extending from southern Mexico to neighbouring Guatemala and Belize. Introduced long ago in other parts of tropical America, it is now naturalised in the Caribbean and northern parts of South America.

It is a small, thorny deciduous tree 5 to 10 m (16 to 32 ft) tall, typically with a short trunk or multiple stems supporting a rounded crown of arching, gently drooping branches. The upright stems are deeply fluted, sometimes twisted and covered in grey or brown bark.

Leaves are 5 to 12 cm (2 to 4.7 in) long and feathery, consisting of light- to dark-green wedge-shaped leaflets arranged in pairs along the length. They fall from the tree in the dry season to conserve water, leaving the branches partially bare until the new leaves emerge, which is at the start of the rainy season.

Flowers are small, five-petaled, pale yellow, ill-scented and borne in cylindrical clusters up to 7.5 cm (3 in) long, arising at the leaf base. They bloom in the dry season and are followed by flat seedpods 2 to 5 cm (1.2 to 2 in) long, becoming dry, light brown and with up to three flat brown seeds inside. 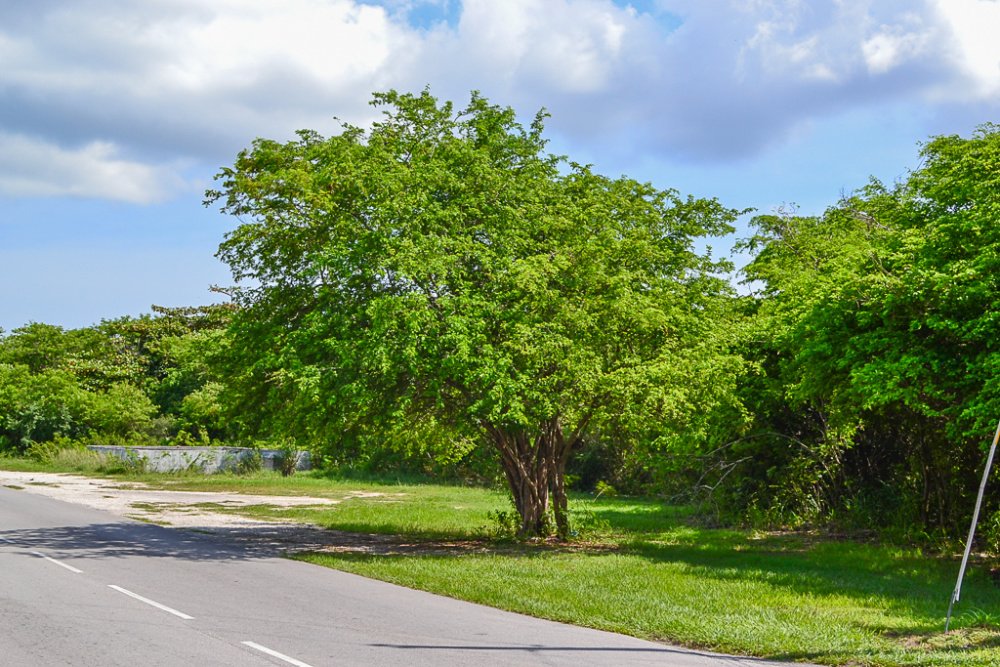 The wood yields a valuable dye in the blue to purple colour range. Indigenous Americans have long used it to colour fabric woven from cotton and wool. After the arrival of Europeans, it developed into an important commercial dye known as 'Logwood dye' for the clothing and medical industries.

Only the brownish-red heartwood contains the dye, which is stripped of the surrounding sapwood soon after harvesting.

The heartwood is finely chipped, covered in boiling water, and then left to soak for up to twelve hours as the first step in making the dye. The soaking causes the chips to ferment and the dye to leach into the water. Then more water is added, and the chips simmered over heat for twenty minutes, which completes making the dye liquor. The dye liquor is dehydrated in commercial operations under a vacuum to produce dye crystals.

Various mordants are added to the dye liquor to obtain different colours. Alum (aluminium) gives purple shades but must be combined with copper or iron to increase colour-fastness. Copper itself gives a blueish hue and iron dark purple to black, depending on the amount added.

Fibre and fabric dyed with logwood dye need a hot dye bath, simmering over heat for about forty-five minutes and then soaking until cool to give a good colour. Repeated rinsing several times after dyeing is reportedly critical to reducing 'dye bleed', a term used to describe when the dye leaches out of the fabric.

Logwood dye was once used as a colouring agent in black hair colouring and to neutralise red tones in dyed hair. It is also the source of haematoxylin, a staining agent used in cytology and histology to differentiate biological matter, usually at the cell level and in examination under a microscope.

The flowers produce abundant nectar, and Logwood is reported as a major nectar source and honey plant throughout its native and non-native range. Nectar flows can be heavy and long-lasting in plants with access to water through groundwater or rainfall. Pure logwood honey is light amber to almost white, and yields of up to 200 kgs (440 lbs) per colony per season have been reported.

The wood is hard and heavy, in the range of 960 to 1040 kgs per cubic meter (60 to 65 lbs per cubic ft). It is naturally resistant to rot and decay but comes in logs too small and poorly-formed to make sawing them into lumber piratical. Where not harvested for their dye, the stems are cut for fenceposts and also make excellent firewood and charcoal.

In his song 'No woman no cry', Bob Marley refers to the use of Logwood as firewood in the verse 'Georgie would make a fire light, as it was logwood burning through the night'.

Grows naturally in sub-humid to moderately humid tropical lowland climates, generally in frost-free areas with annual lows of 18 to 25°C, annual highs of 27 to 35°C, annual rainfall of 900 to 2000 mm and a dry season of 3 to 6 months.

Logwood has long been introduced in Jamaica and has naturalised there, mainly on the island's south coast, at elevations from near sea level up to 460 m (1500 ft), where the average low of the warmest month is 20°C (68°F) or warmer.

New plants usually start from seed, which remain viable for up to eight months under cold, dry storage and germinate readily, with about half sprouting after three weeks.

Performs best on free- to slow-draining clay, loam, sand and gravel soils of a moderately acid to alkaline nature, generally with a pH of 5.5 to 8.5 and on sites with full to partial sun exposure. It has good tolerance to seasonal flooding and poorly drained, swampy soils. However, heavy soils are reportedly unfavourable to the production of the dye.

Stems harvested for extracting the dye are usually ready to be cut when the plant is about ten to twelve years old.

The plant produces a large amount of seed that germinate readily. Logwood, if left unchecked, can, over time, form dense, impenetrable thickets.

Logwood is recorded as a weed of the natural environment in Australia. And as an invasive species in the Caribbean, a term only applied to severe, high-impact weeds. The Hawaii Pacific Weed Risk Assessment project (HPWRA) assessed it as a high weed risk species for Hawaii.

The branches are armed with sharp thorns or spines that can inflict injury on the unwary.