Calamansi is a citrus family member, a natural hybrid of Kumquat (Citrus japonica) and Mandarin (Citrus reticulata). One of the most common backyard fruit trees in the Philippines, it is also cultivated there commercially, particularly in Oriental Mindoro Province, for its fruit, the juice being used as a citrus flavouring and souring agent.

In tropical areas, it may grow into a small tree up 7.5 m (25 ft) tall, though elsewhere is typically 3 to 5 m (10 to 16 ft) tall with a low-branching habit, forming a densely leafy rounded crown. The branches are thin and armed with sharp thorns.

Leaves are oval, 4 to 7 cm (1.6 to 2.8 in) long, dark glossy green on top, pale green underneath and alternately arranged and clustered at the ends of the branches. They give off a citrusy aroma when crushed and remain on the plant throughout the year.

Flowers are five-petaled, white with pale yellow centres, 2.5 cm (1 in) wide and borne singularly or in clusters of two or three at the branch tips. They are sweetly fragrant, bloom almost year-round, and, if fertilised, develop into small, round fruit 3 to 4.5 cm (1.2 to 1.6 in) in diameter.

The pulp is deep orange, juicy and arranged, like an orange, in segments with or without seed. Numerous oil glands dot the peel, giving a glossy surface to the fruit and a pleasing, citrusy aroma. The peel is not easily removed when young but becomes less adhering and easier to peel away as the fruit ripens. 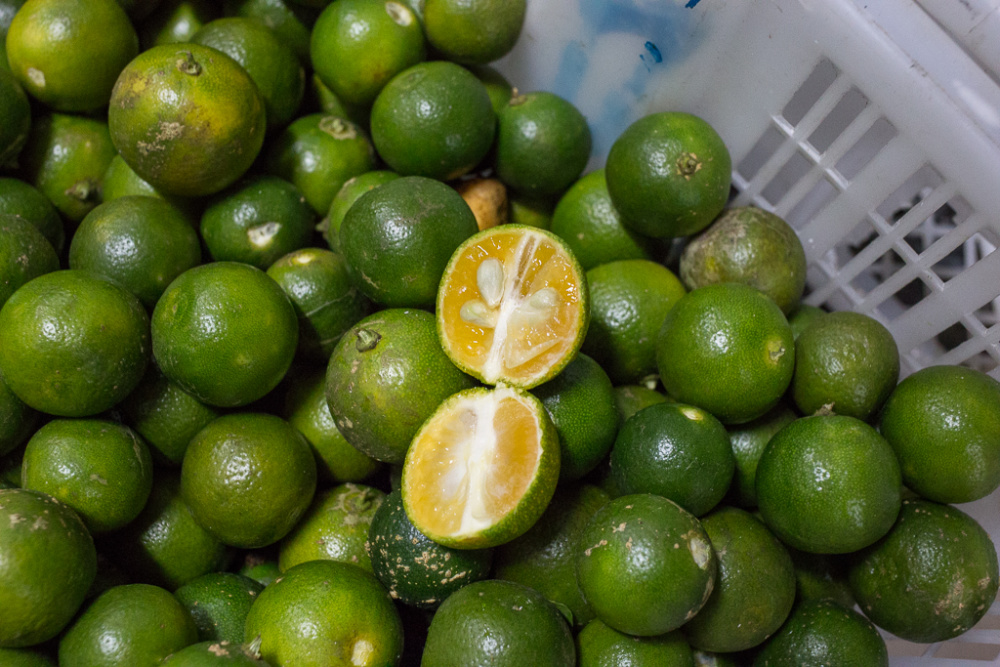 Juice squeezed from the fruit has a pleasing sour citrus flavour and is widely used as a souring agent and as a flavouring in beverages, including soft drinks, particularly in the Philippines, Thailand, Malaysia and Indonesia. A large proportion of the juice produced in the Philippines is pasteurised and made into a juice concentrate. It is also used directly as a flavouring in bottled citrus drinks sold throughout the country.

The whole or sliced fruit are preserved in syrup, made into marmalade or sugared and dried to make candied fruit.

It is suitable for growing in containers and as an ornamental fruit tree in gardens, in climates ranging from tropical to warm-temperate.

The flowers produce a good amount of nectar, enough to make honey, and are actively worked by honeybees. The honey is orange-amber, fluid, and aromatic, with a rich, pleasing flavour and slightly acid aftertaste.

Grows and fruits naturally in humid warm-temperate, subtropical and tropical climates, generally frost-free areas with annual lows of 9 to 25°C, annual highs of 18 to 37°C, annual rainfall of 600 to 3000 mm and a dry season of 5 months or less.

New plants can be raised from seed or using vegetative propagation methods. Performs best on well-manured, free-draining loam and sand soils of a moderately acid to neutral nature, generally with a pH of 5.5 to 7.0, and on sites with full to partial sun exposure. It has poor tolerance to slow-draining or permanently wet soils.

It is listed as a weed in at least one reference publication. Still, there does not appear to be any record of it anywhere as a serious weed, despite its widespread introduction and cultivation. It is assessed as a low weed risk species for Hawaii by the Hawaii Pacific Weed Risk Assessment (HPWRA) project.