Star apple is a fruit-bearing tree originating from the Caribbean, its native range extending along the chain of islands from Jamaica, through the Cayman Islands, Cuba and Hispaniola, to Puerto Rico.

A medium-sized tree, it may reach heights of up to 30 m (100 ft) in natural forest habitats, though it is more commonly 15 to 20 m (50 to 65 ft) tall. On open sites, it develops a short trunk supporting a densely leafy, rounded crown of wide-spreading branches that droop at the ends, creating a weeping appearance. The bark is dark brown, rough and fissured.

Leaves oval to elliptical, dark lacquered green on top and copper-brown underneath, their contrasting colouration adding visual interest to the tree. They remain on the tree where the dry season is short but fall to the ground where it is long and pronounced.

Flowers tiny, purplish or greenish and bisexual, having both female and male parts. Flowering appears to be associated with decreasing day length that starts in late summer and continues into late autumn or early winter.

The fruit ripen around three to four months after fruit-set, usually from winter to late spring, or through to early summer in parts of its native range. They are round, about the size of a baseball or larger and come in smooth, purple- or green-skinned varieties. A star-shaped pattern is revealed when they are cut in half crosswise, which has led to the name 'Star Apple' being applied to both the fruit and tree. The seed are oval, largish, and glossy dark brown to near black. 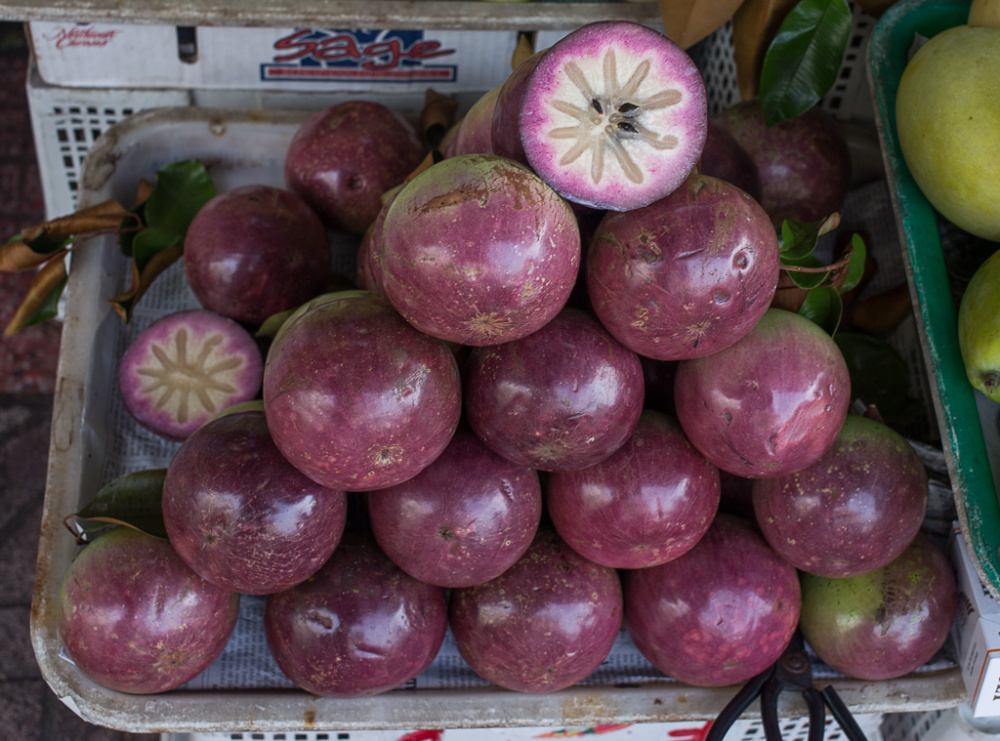 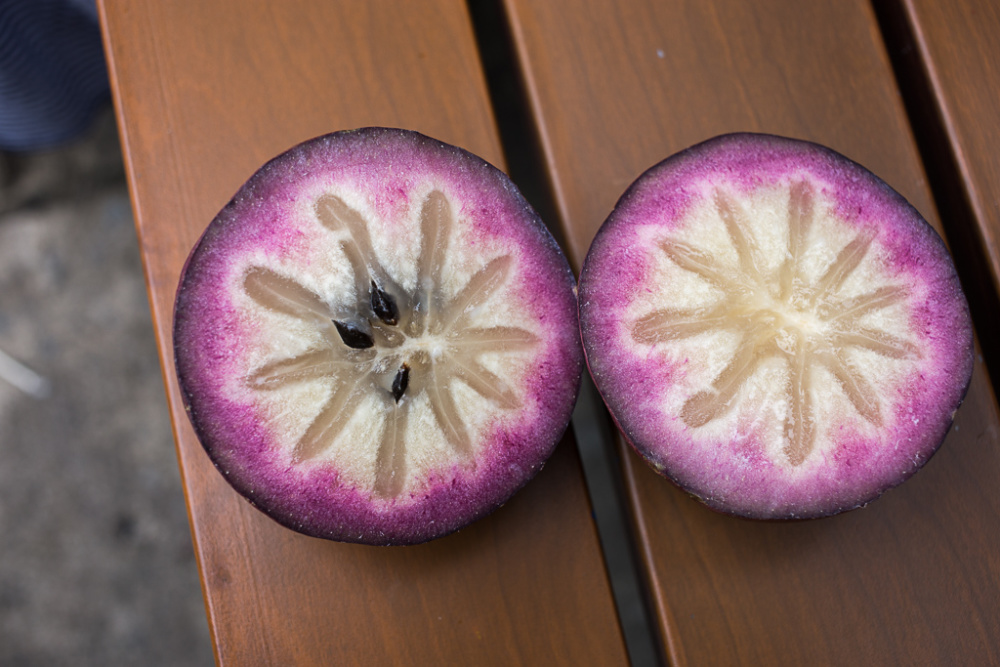 Star apple cut in half

The tree is cultivated primarily for its fruit, which are eaten fresh out-of-hand or used in fruit salads. They are usually cut in half and the sweet, soft, jelly-like pulp scooped out with a spoon, avoiding taking any of the pulp close to the rind, as this has a sticky latex, especially in fruit that have not fully ripened. The fruit do not continue to ripen after being harvested, so are best left on the tree until fully ripe.

The leaves with their contrasting colouration adds ornamental interest in gardens, and their dense arrangement provides shade from the tropical sun.

Star Apple trees produce a medium-weight wood, averaging out at around 700 kg per cubic meter (44 lbs per cubic ft), with low natural resistance to decay. This puts it in the non-durable hardwood class, limiting its suitability for any outdoor or in-ground construction work. When available, it is mostly used for turnery and occasionally for making furniture and cabinets.

Star apple grows and fruits naturally in moderately humid subtropical and tropical climates, generally frost-free areas with annual lows of 15 to 25°C, annual highs of 26 to 35°C, annual rainfall of 900 to 3000 mm and a winter dry season of 3 to 6 months.

Although Star Apple trees also grow well in wetter climates with no dry season, flowering is usually poor due to fungal attack, resulting in low fruit production. As well, trees may fail to produce flavoursome fruit in areas where the average low of the warmest month is below 20°C (68°F).

New plants are usually started from seed, which remain viable for up to six months and germinate readily. However, seedling trees may take up to ten years to produce fruit, so vegetative propagation is preferred. Cuttings and air-layering (circumposing) methods are the most commonly practised and the trees start to flower and bear fruit when around three to five years old.

Mature trees in South Florida produce up to 68 kg (150 lbs) of fruit in a season but this may be low compared to regions with warmer, tropical climates.

Performs best on free-draining loam, sandy-loam and loamy-sand soils of a moderately acid to alkaline nature, generally with a pH of 5.0 to 8.0, and on sites with full to partial sun exposure.

Star Apple is listed as a weed in at least one reference publication but there does not appear to be any record of it anywhere as a serious weed, despite its widespread cultivation throughout the tropics.