Kauri pine is a large conifer from Australia and Papua New Guinea, producing valuable timber. There are two known varieties, one originating in each native country.

The native range of the Australian variety is limited to areas of subtropical forest on the east coast and elevated parts of the continent's tropical north. In contrast, the Papua New Guinean variety is found in upland areas in the country's east.

In its natural habitat, it may reach heights of up to 40 m (130 ft) with a straight and uniform trunk approaching 2.5 m (8.2 ft) in diameter and without buttresses at the base. The bark is grey, smooth and flakes off in small patches that expose orange-brown underbark, leaving a mottled surface.

Branching starts near the ground on young trees, with the branches steeply ascending and close to the trunk, resulting in a columnar shape. The lower branches naturally prune off as the tree grows, leaving a mostly branch-free trunk topped with a narrow crown.

The leaves come in juvenile and adult forms, though they are generally oval, pale yellow-green when young becoming dark green, thick and leathery with age and arranged in pairs along the branches. They resemble the leaves of a tropical hardwood rather than a conifer.

Fruit are a round to egg-shaped cone, comparable to an orange in size, and are either female or male on the same tree. Only female cones produce seed and release them when mature, around sixteen months after pollination and while still on the tree. The seeds, being winged, get carried on the wind a fair distance. 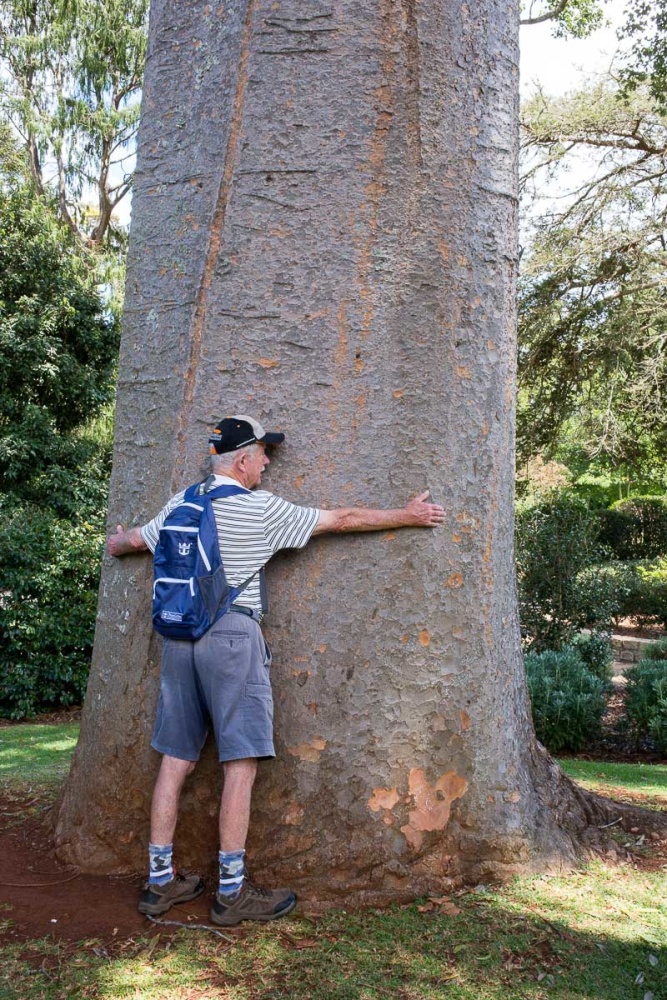 Kauri pine produces a light- to medium-weight wood, averaging 400 to 500 kgs per cubic meter (25 to 31 lbs per cubic ft), with low natural resistance to rot and decay. It is considered a non-durable softwood, suitable only for indoor construction use.

Well-formed logs are sawn into planks for making light furniture, cabinets, other interior joinery, and wooden boxes and crates. Small diameter logs are processed into pulp for making paper and products thereof.

The inner bark exudes a clear white resin that slowly hardens on exposure to the air. Once hardened, it can be harvested and, similar to other Agathis resins, has turpentine-like properties that in the past led to its use in the manufacture of paints and varnishes.

It is an impressive tree that stands out from its surroundings with its large size, handsome uniform shape and eye-catching bark and foliage. It is best suited to large gardens and parks where its growth will not be restricted.

Kauri pine grows naturally in humid warm-temperate, subtropical and tropical climates, generally areas with annual lows of 9 to 20°C, annual highs of 17 to 32°C, annual rainfall of 700 to 5000 mm and a summer or winter dry season of 6 months or less, extending to 8 months with irrigation or groundwater. However, trees achieve their best development at the wetter end of the climate range, with high rainfall and/or a short dry season.

New plants are usually started from seed, which the female cone releases when mature.

Performs best on deep, free-draining clay-loam, loam, sandy-loam and loamy-sand soils of a moderately acid to alkaline nature, generally with a pH of 5.0 to 8.0, and on sites with full to partial sun exposure. It has good tolerance to light salt spray and strong winds.

There does not appear to be any record of it as a serious weed anywhere in the world. The Hawaii Pacific Weed Risk Assessment project (HPWRA) assessed it as a low weed risk species for Hawaii.