Originating in eastern India and Sri Lanka, this shrub or small tree is cultivated for its leaves, which are used as a spice. Nowadays it is more widely distributed, especially where Indians and Sri Lankans have migrated and settled, including countries in Asia, Africa, the West Indies and the South Pacific.

It is a fast-growing shrub or small evergreen tree that may reach heights of up to 6 m (20 ft), though it is more typically 2 to 3 m (6.6 to 9.8 ft) tall with long, wispy, wide-spreading branches. The bark is dark green or brown, dotted with raised wart-like pores and is thin, being easily peeled off in long strips, exposing white underbark.

The leaves are large, up to 30 cm (1 ft) long and feathery, consisting of up to twenty-four leaflets arranged in pairs along the length. The individual leaflets are deep green, oval with a pointed tip, slightly wavy on the margins and have short leaf stalks. They give off a strong curry-like aroma when crushed.

Flowers small, white with five fused petals forming a funnel-shape and bi-sexual, having both male and female parts. They bloom mainly in spring but also on-and-off throughout the year, in large, open clusters at the ends of the branches and give-of a sweet scent that attracts honeybees and hummingbirds.

The fertilised flowers are followed by round to oval fruit resembling a small grape. Green when young, they turn dark purple to almost black when ripe, usually in summer, and when squeezed release blue-coloured pulp with one to two largish green seed inside. 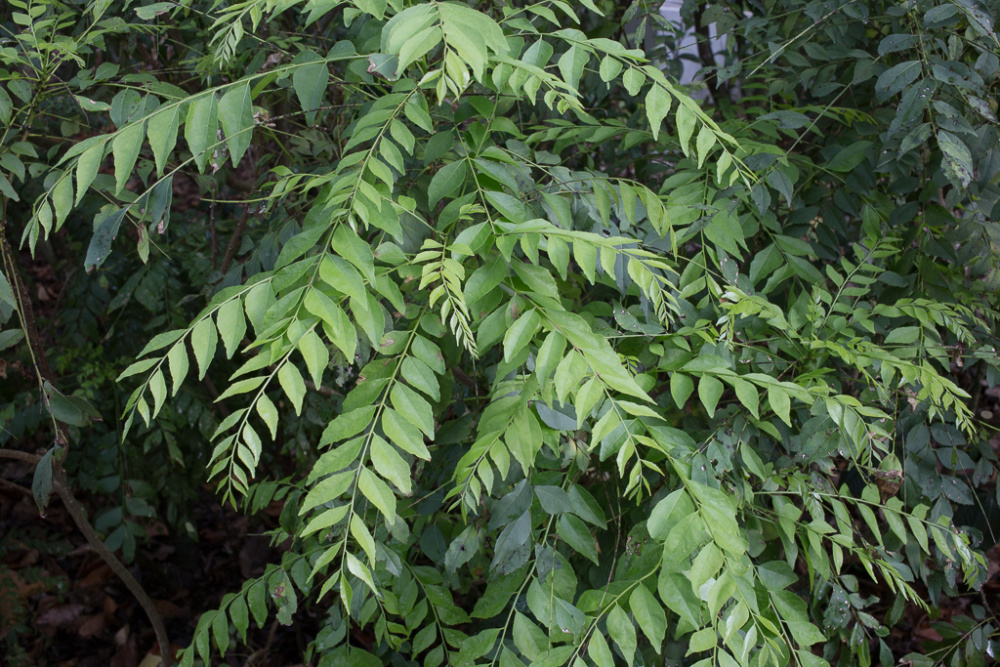 The leaves are a popular spice in south Indian and Sri Lankan cooking and are commonly fried whole in oil, usually along with other spices and curry paste or powder when preparing curry dishes. Although not actually an ingredient in curry pastes or powders, their distinctive curry aroma has led to the name 'Curry leaf' being applied to the plant and leaves in English speaking countries.

The mature leaves are picked and used fresh or are stored dried or chilled in the refrigerator or freezer. However, they are at their most flavoursome when used fresh, as they tend to lose their flavour with time. Some people are put-off by the leaves strong aroma, which becomes more agreeable when cooked.

In India, the leaves are thought to aid appetite and digestion. They are also crushed to apply as a poultice to treat burns and other skin ailments as well as being applied to the scalp as a hair tonic.

Grows naturally in humid subtropical and tropical climates, generally frost-free areas with annual lows of 12 to 25 °C, annual highs of 22 to 34 °C, annual rainfall of 700 to 3000 mm and a dry season of 8 months or less.

Plants can also be grown in pots or containers in cooler climates, if these can be moved indoors when temperatures fall below 5 °C (41 °F).

New plants can be grown from seed, cuttings or root suckers. Germination is slow, taking three weeks or longer and soaking the seed in warm water for twenty-four hours helps to speed up the germination process.

It performs best on rich, well-drained loam or sand soils of a moderately acid to neutral nature, generally with a pH of 5.5 to 7.0 and on sites with full to partial sun exposure. It has poor tolerance to slow-draining or waterlogged soils and is susceptible to iron deficiency on alkaline or limestone soils.

Birds eat the fruit and disperse the seed. It is recorded as having naturalised in tropical Australia, where it is classed as a weed of the natural environment. It is also known to sucker profusely from the roots.