On favourable sites, it is fast-growing and in natural forests up to 70 m (230 ft) tall, with a straight, slightly buttressed trunk up to 2 m (6.5 ft) in diameter supporting a large crown. On open woodland sites, it is more typically a medium-sized tree up to 20 m (65 ft) tall, with a stout trunk and compact crown. The bark is grey or brown, rough, and persists on the lower trunk but peels off in long strips on the upper trunk, revealing smooth, mottled, creamy-white to bluish-grey under-bark.

Like most other eucalyptus species, the leaves change shape as the tree matures. In this species, from almost stalk-less, ovate, dark green leaves on seedling and juvenile trees to long, narrow, dull green, curved lance-shaped leaves on mature trees. They remain on the tree in all seasons and give off a characteristic eucalyptus aroma when crushed.

The flowers are small, though larger than average for a eucalypt, with numerous, long, creamy-white filaments set in a cup-shaped base. They arise singly at the leaf axis, bloom from early spring to summer, then small, brown, woody and warty, bell-shaped seed capsules follow, with tiny black-brown, disc-shaped seed inside. 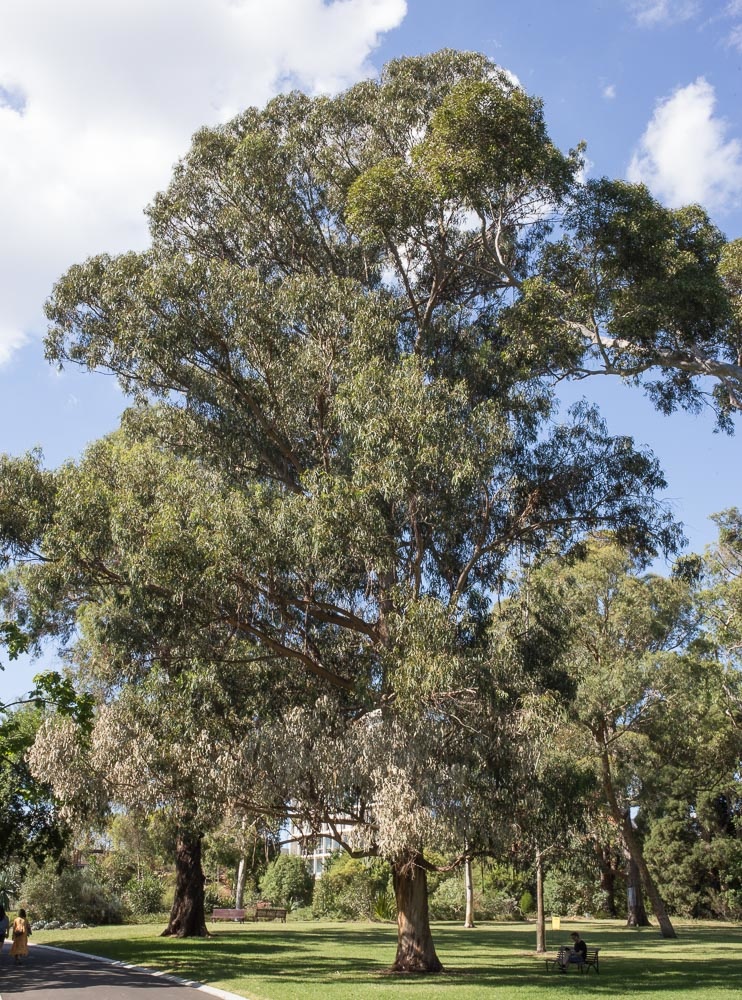 Southern bluegum is cultivated worldwide for its wood, which is mostly ground-up and used as pulpwood for paper manufacturing. It is also cut for poles and posts, sawn into beams for light and heavy construction and is an excellent source-wood for firewood and charcoal-making. Yields reported for fuelwood plantations in Spain range from 10 to 30 cubic meters per hectare per year, the equivalent of 140 to 430 cubic feet per acre per year.

The wood is medium-weight to heavy, from 620 to 840 kgs per cubic meter (39 to 52 lbs per cubic ft) and has low to moderate natural resistance to rot, decay and wood-boring insects, making it generally suitable only for indoor use. Wood coming from wild forests, it is said, is heavier and more naturally resistant than wood from plantation trees.

On steam distillation, the leaves yield eucalyptus oil of the cineole (aka. eucalyptol) type, the most valued of the Eucalyptus oils because of its medicinal and antiseptic qualities. When extracted, the oil is colourless, but ages to pale yellow, especially under long or poor storage conditions and is strongly camphor-smelling and mint-like in taste.

Southern bluegum is, by far, the leading single-species source of cineole-type eucalyptus oil, despite the leaves yielding only 1% oil. Compared to roughly 3.5% for Narrow-leaved peppermint (Eucalyptus radiata), 2% for Gully gum (Eucalyptus smithii) and 1.5 to 2% for Blue mallee (Eucalyptus polybractea), three other commercially important eucalyptus oil-yielding species. This is because of the sheer volume of waste foliage produced on Southern bluegum plantations, from which the oil is extracted as a by-product.

Cineole-type eucalyptus oil is a proven expectorant, antiseptic and antibacterial, particularly against Streptococcus. It is used in cough drops and syrups, vaporiser fluids, ointments, liniments, gargles and oral hygiene products such as toothpaste and mouthwash. It is also commonly used in dentistry, particularly in solvents and sealers for tooth fillings after root canal surgery.

The flowers produce sufficient nectar for honey production. It is reported as a major honey tree in Australia, and in countries where introduced, including Pakistan, Spain, and California in the United States. The honey is light to dark amber with a distinctive flavour, not unlike muscatel grapes, light- to heavy-bodied and slow to granulate. The flowers also produce a good amount of pollen, which honeybees use for brood-rearing.

Southern bluegum grows naturally in humid subtropical and warm-temperate climates, generally areas with annual lows of 5 to 16°C, annual highs of 15 to 30°C, annual rainfall of 600 to 1800 mm and a dry season of 5 months or less, extending to 8 months with irrigation or groundwater.

Although sometimes grown in warmer and wetter climates, the leaves become susceptible to fungal attack, making them unusable for essential-oil production.

It is estimated that more area of Southern bluegum forest is present in Portugal than in any other country outside of Australia.

New plants are usually started from seed, which remain viable for several years if stored under cool, dry, air-tight conditions, generally at temperatures of between 1 and 4°C (34 and 39°F).

The seed need no pre-treatment and can be sown directly in containers with a free-draining potting mix. Most germinate within seven to ten days, and the seedlings are then cared for in a nursery until they are of plantable size, when about four to six months old or around 50 cm (1.5 ft) plus in height.

Performs best on deep, free-draining clay-loam, loam, silt-loam, sandy-loam and loamy sand soils of a moderately acid to neutral nature, generally with a pH of 5.5 to 7.0, and on sites with full sun exposure. It has poor tolerance to alkaline and slow-draining or waterlogged soils.

Southern bluegum trees are fast-growing on favourable sites, increasing their height by 2 to 3 m (6 to 10 ft) per year.

Southern bluegum is assessed as a high weed risk species for Hawaii and Florida, respectively by the Hawaii Pacific Weed Risk Assessment (HPWRA) project and the IFAS Assessment of Non-Native Plants in Florida's Natural Areas.