Plum pine is an ornamental and timber-producing conifer originating in Australia, its natural range limited to areas of subtropical forest on the continent's east coast.

In closely-spaced forests, it may reach heights of up to 40 m (130 ft), though on open sites is more commonly 15 to 25 m (50 to 65 ft) tall and grows at a moderate to fast rate, with a straight trunk, sometimes fluted at the base. The bark is dark brown, fissured and fibrous.

Branching starts low on young trees, forming a dense pyramidal crown. As the tree ages, the lower branches prune off naturally, and the remaining branches become wide-spreading, resulting in a rounded crown in mature trees.

The leaves are narrowly lance-shaped, of variable lengths up to 18 cm (7 in) and alternately arranged along the branches. They emerge glossy red, soft and limp, soon become lime-green, then gradually mature into dark green, stiff and leathery. The light, bright colours of the young leaves make a stark contrast to the darker, older leaves, which predominate on the tree.

The flowers are small and insignificant, green-white, either female or male, on separate trees and held in finger-like clusters arising at the sides of the branches. They are followed on female trees by small, plum-like pseudo or false fruit that become bluish-black when ripe with a single round seed attached, which is the actual fruit. They usually ripen from autumn to winter. 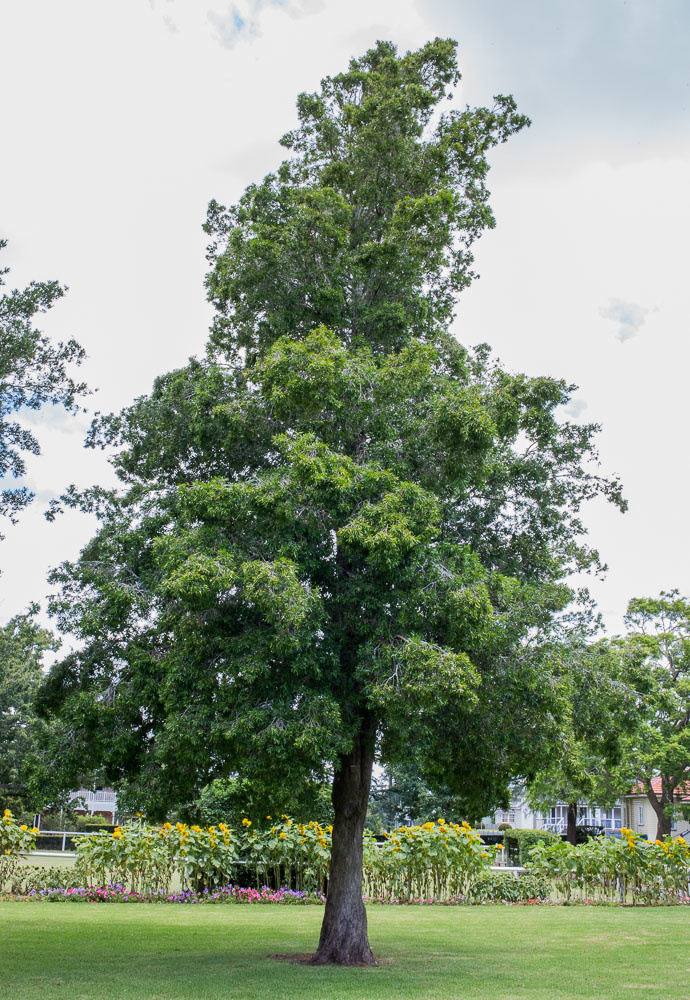 The wood is medium-weight, averaging 600 kilograms per cubic meter (37 pounds per cubic ft) and has moderate to high natural resistance to rot and decay, termites and marine borers, making it fit for indoor, outdoor, and in-water construction.

It is a popular ornamental in Australia for its shapely form, showy foliage and low-branching habit, which has led to its use as a tall hedge or windbreak.

The dark green, mature foliage is used as backing greenery to add contrast, texture and volume to floral arrangements. Cut stems are stripped of their bottom leaves then placed cut-end in lukewarm water. They are reported to have a vase life of up to three weeks.

The false fruit have a sweet, resinous flavour when ripe and are made into jam, chutney and fruit sauce, especially to accompany rich meats, such as lamb, duck and game. They have a high Vitamin C content.

Grows naturally in moderately humid subtropical and tropical mid- to high-elevation climates, generally areas with annual lows of 9 to 21°C, annual highs of 19 to 31°C, annual rainfall of 1000 to 1600 mm and a dry season of 6 months or less.

New plants can be started from seed or cuttings. Cuttings from male trees ensure it does not become a weed when cultivated, but this is at the expense of fruit production, which requires both male and female trees.

Performs best on free-draining clay, loam or sand soils of a moderately acid to neutral nature, generally with a pH of 5.0 to 7.0, and on sites with full to partial sun exposure.

Birds and bats eat the fruit and help to disperse the seed. Still, there does not appear to be any records of its escape and naturalisation, despite its introduction into areas outside of its natural range. The Hawaii Pacific Weed Risk Assessment project (HPWRA) assessed it as a low weed risk species for Hawaii.

The roots are invasive, and in Australia, a minimum planting distance of ten meters away from underground pipes, building foundations and other structures is recommended.