Babaco is a mountain papaya species originating from the highlands of Ecuador and Colombia and is believed to be a naturally occurring hybrid of Carica stipulate and Carica pubescens.

The plant is a small herbaceous shrub, similar in appearance to other papaya species. Still, it only grows 1.5 to 3 m (5 to 10 ft) tall. Much like papaya, it has an erect semi-woody trunk that is green when young, grey-brown when mature and marked by leaf scars. Generally, the thicker the trunk, the more vigorous the plant and the more productive it is likely to be. It exudes a sticky, white latex on wounding, as do all plant parts, including the green or young fruit. Lateral branching is rare, but the roots often send up shoots.

Leaves are very large, dark green, deeply lobed, prominently ribbed and veined, and attached with a long hollow leaf-stalk to the trunk. They are alternately arranged along the top half of the trunk and remain on the plant for four to six months before they die back and fall to the ground.

Flowers are usually solitary, bell-shaped with five creamy-white petals, dark green sepals and arise at the leaf axis. They bloom without seasonal influence, starting about three months after planting and are all female but do not require pollination to set fruit.

The flowers are replaced by elongated, five-sided papaya-like fruit up to 30 cm (1 ft) long. These usually weigh from 1 to 2 kg (2.2 to 4.4 lbs) but are sometimes larger. They are green when young, becoming bright orange-yellow when ripe and ripen in progression from the lowest fruit to those higher up on the trunk. Because it is a hybrid and sterile plant, no seed are produced. 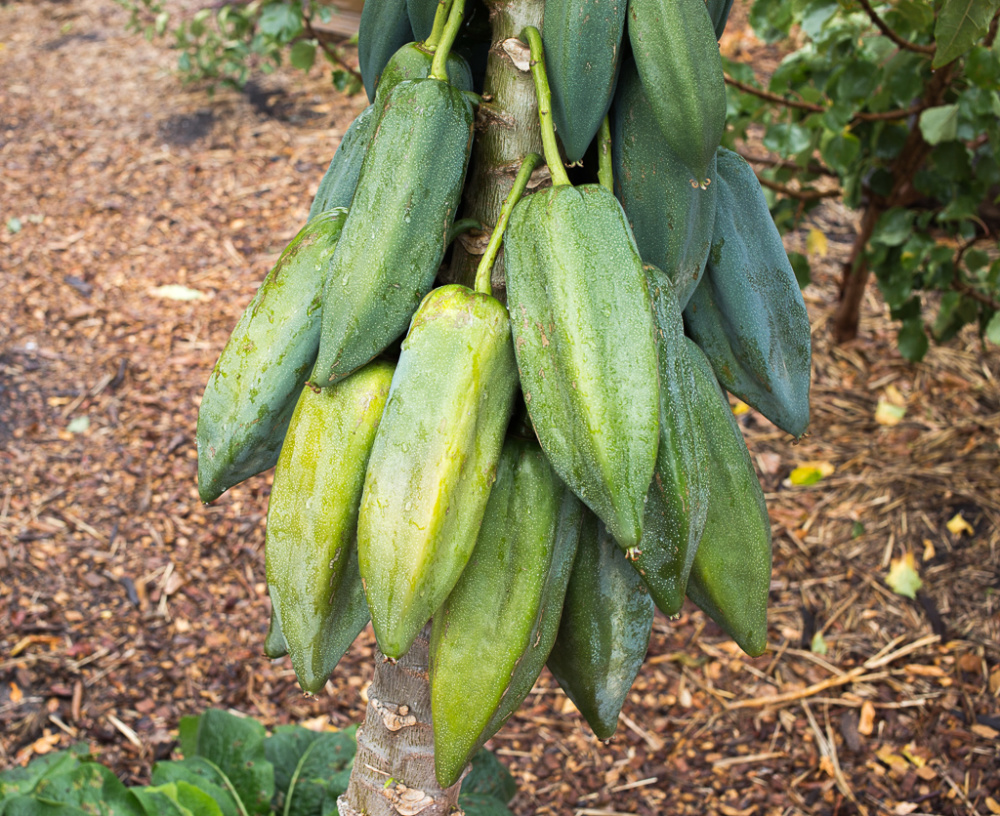 The fruit are fragrant and flavoursome, with a taste and aroma distinctly different from Papaya (Carica papaya). The pulp is creamy-white, juicy with a melting texture, and a pleasingly sub-acid to slightly acid flavour that tastes similar to cantaloupe (rockmelon) with a hint of passionfruit or pineapple. It is mostly eaten fresh out-of-hand and is easy to prepare because it is eaten with the skin on, and there are no seed to remove. It is also made into juice, dried fruit and jam.

Babaco latex contains large amounts of the protein-digesting enzyme papain, harvested commercially from Papaya (Carica papaya),  and used as a meat tenderiser and a digestion aid for those unable to digest protein properly. 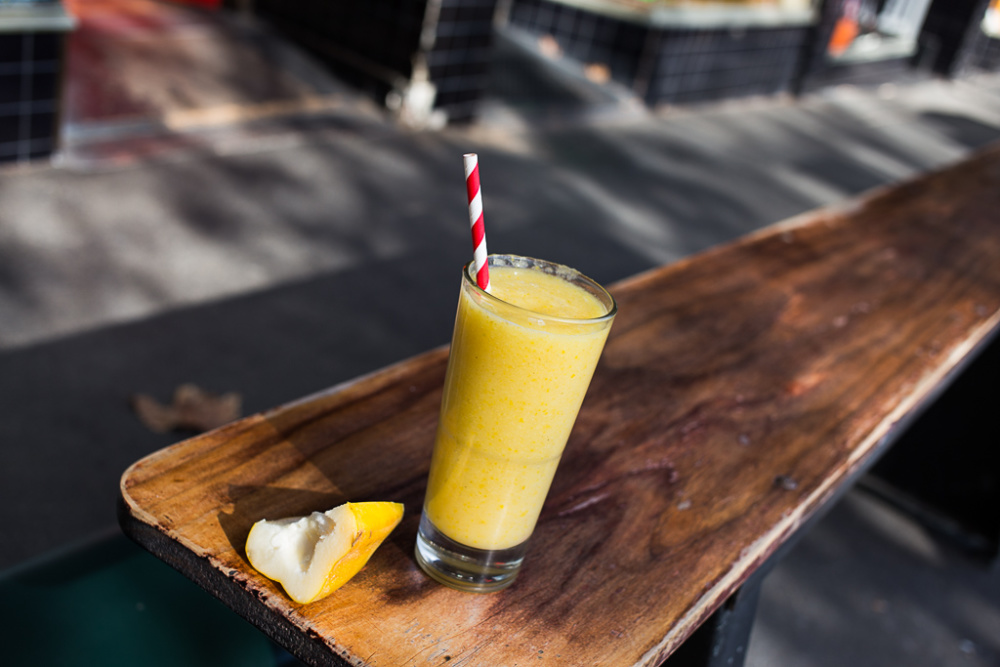 Grows naturally in sub-humid to humid subtropical and tropical highland climates, generally frost-free areas with annual lows of 9 to 17°C, annual highs of 19 to 29°C, annual rainfall of 500 to 2000 mm and a dry season of 5 months or less.

Babaco is also cultivated with irrigation in much drier areas, such as southern coastal California.

New babaco plants are started from cuttings because no seed are produced.

Cuttings are obtained by dividing the trunk of mature plants into slender sections around 30 cm (1 ft) long and 5 cm (2 in) in diameter. These are then dipped in a fungicide bath, and the rooting end in a rooting hormone. They are then planted in a free-draining potting mix, where they usually strike roots within two to three months.

Performs best on organically rich, fast-draining loam, sandy-loam and loamy-sand soils of a moderately acid to slightly alkaline nature, generally with a pH of 5.5 to 7.5 and on sites with full to partial sun exposure.

Well-tended plants start bearing fruit when about one-year-old and then continuously after that for two years, after which they become unproductive and die. However, before then, they may be used for cuttings to propagate new plants.

The fruit are harvested when they turn from green to yellow and before they are fully ripe. When properly harvested and carefully packed, Babaco fruit remain in good condition for more than a month at 6 Â°C (43 Â°F). The fruit does not oxidise (turn brown) over time.

Yields are better than papaya, and intensive cultivation has yielded up to 100,000 kgs to the hectare, with 40,000 to 60,000 kgs per hectare (35,680 to 53,500 lbs per acre) more usual. It has been grown commercially with varying degrees of success in Ecuador, Australia, New Zealand, France, Spain, Italy, California and Israel.

Babaco plants are highly susceptible to root-rot and powdery-mildew, diseases brought on by poor drainage or overwatering and constantly humid conditions. When laying mulch and fertilising, care should be taken to keep the materials away from the trunk.

Babaco is recorded as having escaped cultivation and naturalised on the Galapagos Islands. Still, there is no record of it anywhere as a serious weed. And because the plant does not produce seed, it is unlikely to develop into a noxious weed or invasive species.

The latex is highly irritating to the eyes.