Nasturtium is a flowering herb originating in highland areas of South America, its native range extending along the Andes mountains from Colombia to Bolivia.

The stems are soft, succulent and grow quickly with a trailing habit, branching and spreading out along the ground, cascading over walls and climbing up on structures such as fences, to heights of up to 2 m (6.6 ft). In warm climates, without frost or extreme heat and with adequate moisture it is perennial and is self-propagating, putting down roots and re-seeding as it grows.

Leaves are medium-green, disc-shaped with wavy margins and from 5 to 15 cm (2 to 6 in) in diameter. They are held above the ground on long, erect leaf stalks and close together with the leaf edges overlapping, shading the ground beneath them.

Nasturtium blooms throughout the year, producing solitary, trumpet-shaped flowers on erect stalks, in shades of yellow, orange or red, contrasting strongly against the green of the leaves. They are followed by roundish, pea-sized green fruit divided into three spongy segments, each enclosing a single seed.

In the tropics, the leaves and flowers are most abundant during the cooler months of the year. 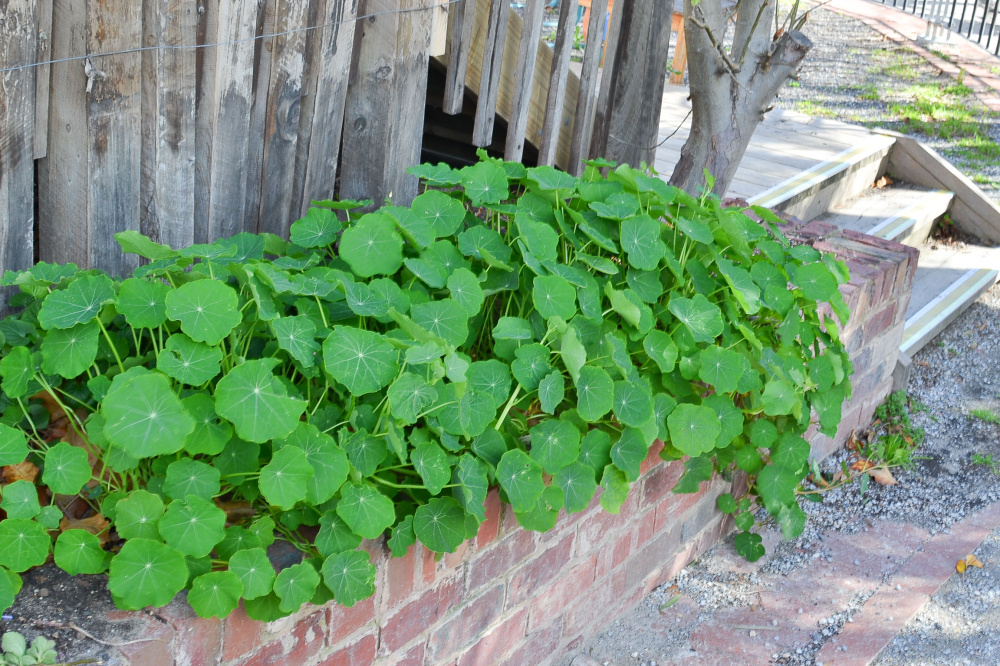 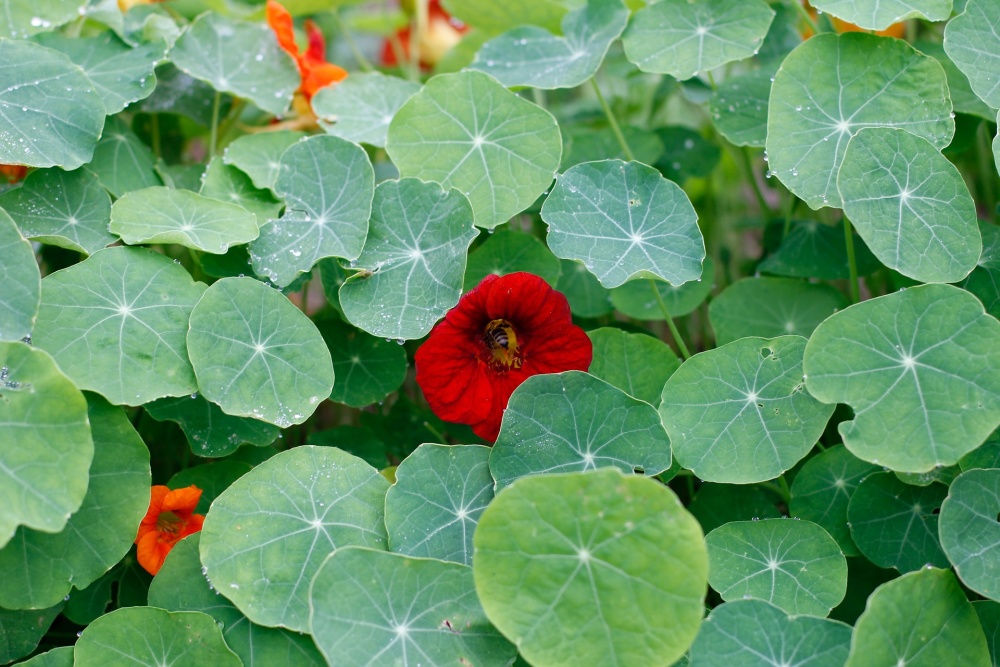 Nasturtium is widely cultivated in gardens for its ability to quickly cover ground, suppress weeds and conserve soil moisture, its interesting foliage and brightly coloured flowers a bonus. The flowers also attract hummingbirds, butterflies, bees and other beneficial insects to the garden, making it suitable for companion planting, especially in vegetable beds. It is also well-suited, on account of its trailing and cascading habit, to poolside landscapes, containers and raised garden beds.

Both the young leaves and flowers are edible and have a sharp, peppery taste that has been likened to watercress, and which comes from the presence of mustard oil. They are used as a garnish or added to salads for their taste, colour and visual interest. The older leaves are not normally used as they are strongly flavoured and somewhat bitter. The unopened flower buds are pickled whole, usually in a flavoured brine and compare closely to capers in how they are prepared and eaten. 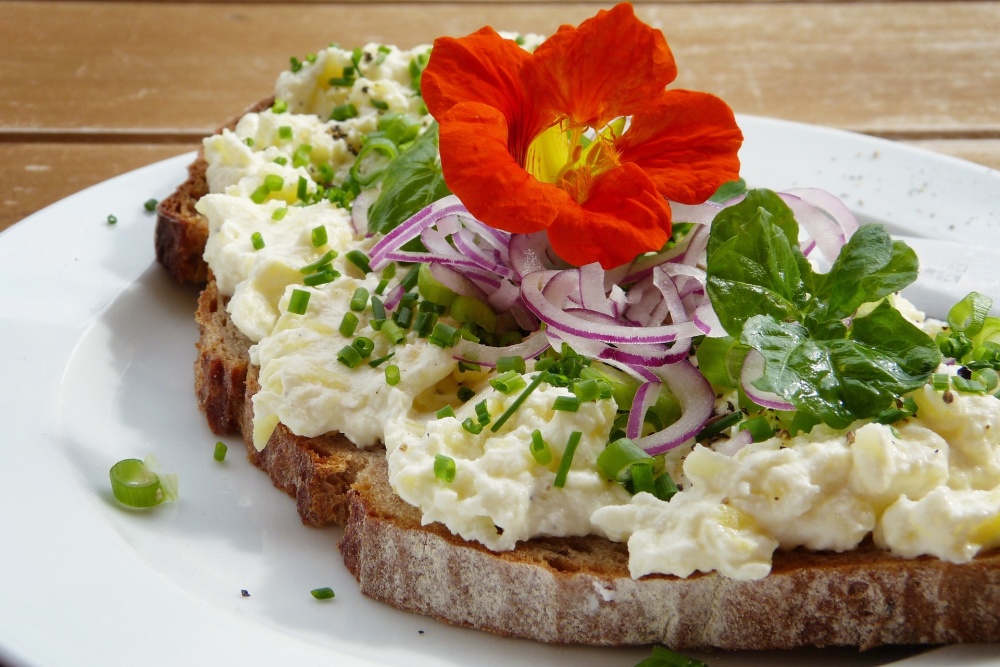 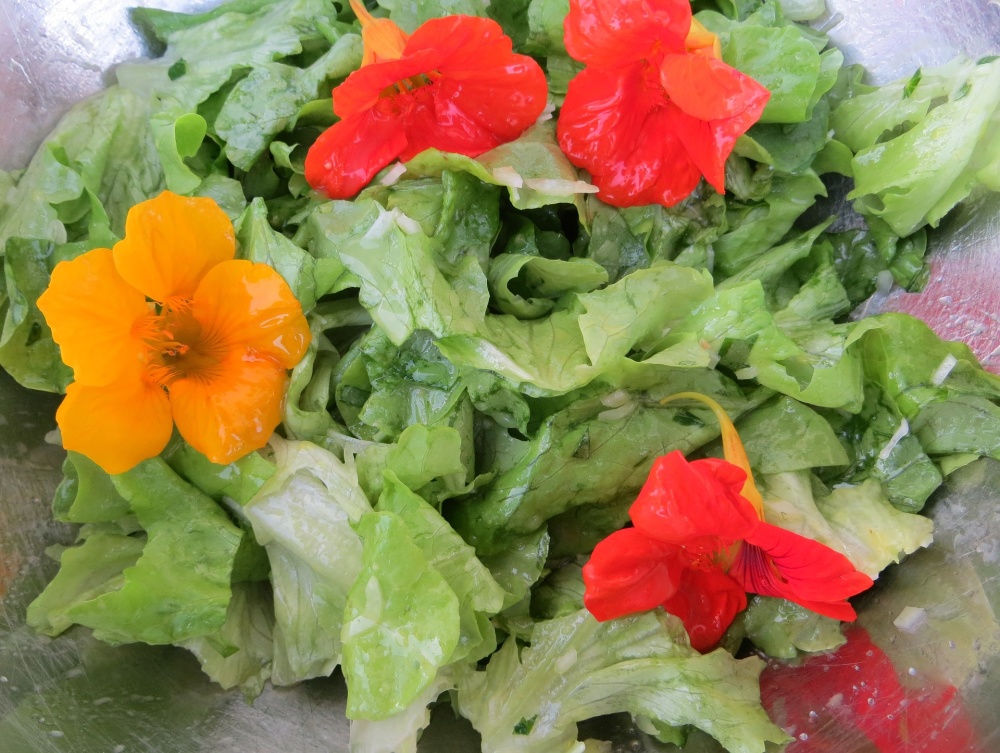 Grows naturally in humid cool subtropical and tropical mid- to high-elevation climates, generally best in frost-free areas with annual lows of 9 to 18 °C, annual highs of 20 to 27 °C, annual rainfall of 700 to 3500 mm and a dry season of 5 months or less.

Nasturtium can also be cultivated with irrigation in much drier and warmer climates, though with markedly less success due to the plant's inability to cope with excessively hot and dry conditions.

New plants can be started either from seed or cuttings and perform best on moderately fertile, free-draining loam and sand soils of a slightly acid to slightly alkaline nature, generally with a pH of 6.0 to 7.5. Rich soils, with high levels of nitrogen, encourages leaf growth, often at the expense of flowering.

Over-exposure to the hot afternoon sun can cause it to die back and become unsightly. For this reason, it is best grown in tropical lowland areas as an annual, in the cool months of the year and with shade from the afternoon sun. In cool, high elevation troipical areas it grows well in full sun all year round.

The fruit are buoyant and easily dispersed by moving water, which enables the seed to be carried a far distance. It is listed as a serious weed in at least one reference publication and is assessed to be a high weed risk species for Hawaii by the Hawaii Pacific Weed Risk Assessment (HPWRA) project.