Susumber (aka. Pea Eggplant and Turkey Berry) is an eggplant relative producing small, edible fruit that are cooked as a vegetable.

Native of Central and South America and the Caribbean, its natural range extends from Mexico to as far south as Brazil. Long introduced as a vegetable plant in other tropical regions, it is now widely cultivated in countries in Africa, Asia and the Pacific.

It is a fast-growing shrub or short-lived perennial, typically 1 to 3 m ( 3 to 10 ft) tall, occasionally up to 5 m (16 ft), with an erect central stem, off of which grown slim lateral branches.

The stems and branches are semi-woody, with thin green bark and with a coating of fine hairs on young stems. On mature stems, the bark is light grey and dotted with raised pores (lenticels). They are also either armed with sharp spines or are unarmed.

Leaves broadly oval or heart-shaped 7.5 to 20 cm (3 to 8 in) long, smooth or lobed on the margins, on the top dull green, underneath grey-green and finely hairy. They are arranged in pairs or singularly along the branches and remain on the plant in all seasons.

The flowers are small with five sharply-pointed white petals and yellow centres, borne in clusters arising at the sides of the branches. They bloom on-and-off throughout the year but are at their fullest from spring through summer and are followed by small, round fleshy fruit, 1 to 1.5 cm (0.4 to 0.6 in) in diameter. These are green when young, becoming yellow or orange-red when ripe, with many very small, brown, disc-shaped seed inside. 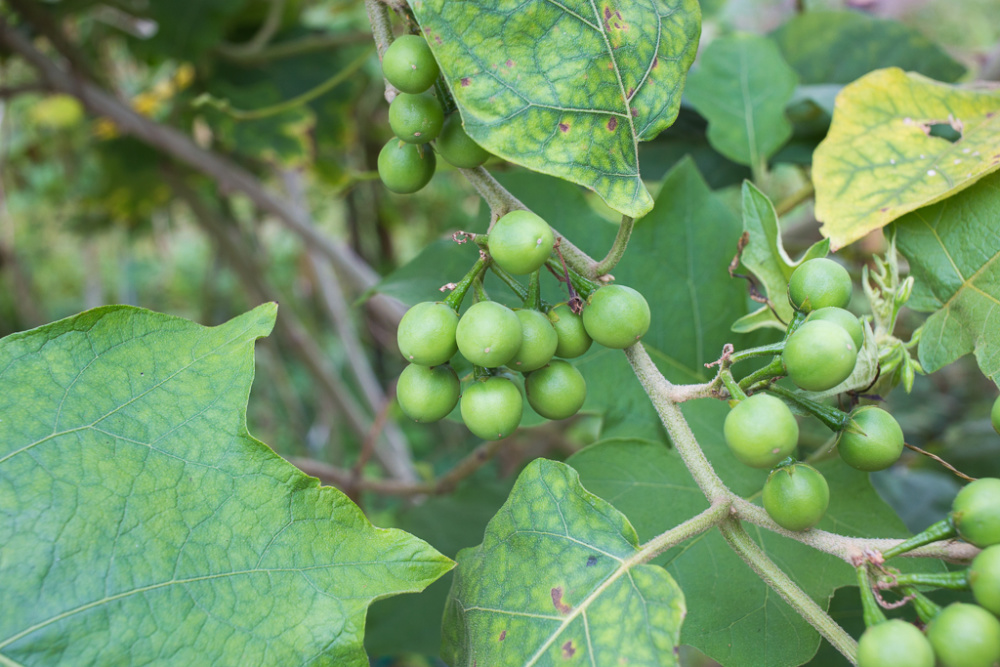 The mature but still unripe or green fruit are added whole or sliced to Thai curries, Indian curries and similar coconut-sauced fish, meat and vegetable dishes served-up in its native range. They have an earthy, slightly bitter flavour, similar to eggplant and remain semi-firm after cooking, adding a meaty texture. Their small round size and green colour make them somewhat resemble green peas, adding visual interest to dishes.

Seedlings are sometimes used as rootstock for grafting on Eggplant (Solanum melongena), to overcome issues of eggplant susceptibility to Bacterial wilt and Fusarium wilt. 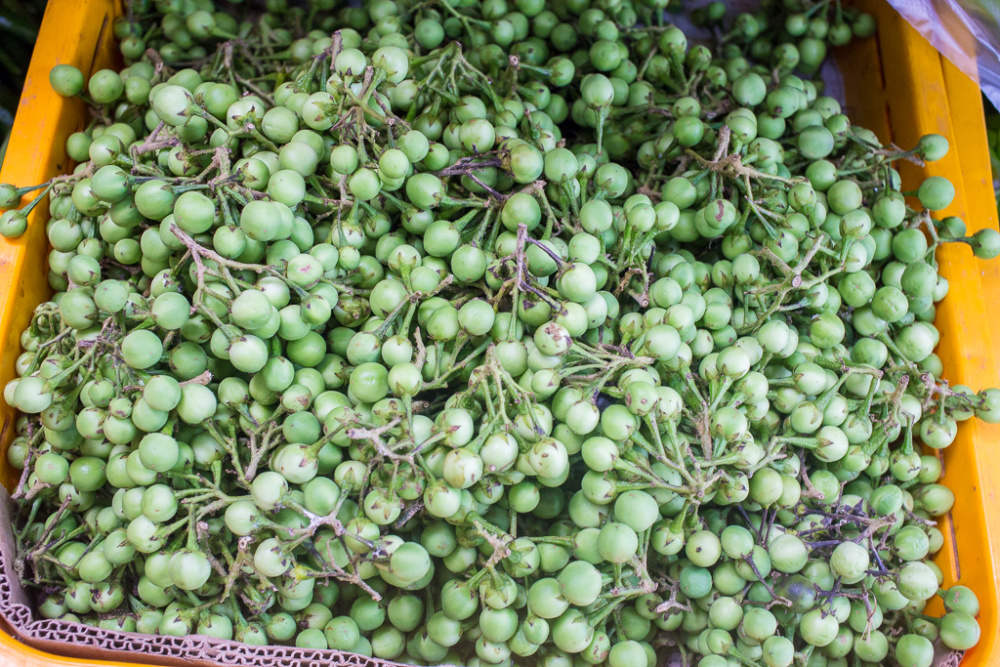 Grows naturally as perennial in moderately humid to very humid subtropical and tropical climates, generally frost-free areas with annual lows of 14 to 25°C, annual highs of 22 to 37°C, annual rainfall of 700 to 4500 mm and a dry season of 7 months or less, extending to drier areas with irrigation.

Susumber may also persist as an annual in somewhat cooler areas, such as in Mid and Northern Texas, in the United States.

Although new plants are easily raised from seed, a significant amount of the harvest in its native range comes from wild plants that germinate and grow from bird-dispersed seed. The plants are mostly encountered on disturbed soils along roadsides or in open fields or paddocks, where there is enough sunlight to encourage growth.

Performs best on rich, free-draining loam and sand soil of a moderately acid to alkaline nature, generally with a pH of 5.0 to 8.0, and on sites with full to partial sun exposure. It has good tolerance to drought and limestone soils.

Birds eat the fruit and disperse the seed afar. Is reported a serious weed and invasive species in more than one country. It is prohibited from cultivation in Florida and is assessed as a high weed risk species for Hawaii, by the Hawaii Pacific Weed Risk Assessment (HPWRA) project.