Originating from Central America, this shade, timber and forage tree is typically 15 to 20 m (50 to 65 ft) tall, though exceptional specimens may reach heights of up to 30 m (100 ft) or more.

The branches start low on the trunk then spread out and up to form an umbrella-shaped crown. Where it has room to grow, it develops a massive, wide-spreading crown that is almost as wide as the tree is tall, supported by a stout trunk up to 2 m (6.5 ft) in diameter. The bark on mature trees is grey, rough and fissured.

Leaves are large and feathery, consisting of small green oblong leaflets that curiously fold closed at night to reduce transpiration, thereby conserving water. In the daytime, they open again for photosynthesis and help to shade the trunk and roots from the sun. Most leaves and their leaflets are shed in the dry season to conserve water, leaving the branches partially bare until the new leaves emerge in the rainy season.

The flowers resemble powder-puffs with long pink-tipped filaments and are perfect, having both female and male parts. Flowering occurs in the dry season but varies by area, with almost continuous flowering reported in areas without a distinct dry season. In Hawaii, trees usually flower from April to August and tropical America and the Caribbean from January to April.

Fertilised flowers are followed by slim, ribbed seedpods 10 to 25 cm (4 to 10 in) long, green when young, becoming dark brown to near black when mature, at which time they detach and fall to the ground. 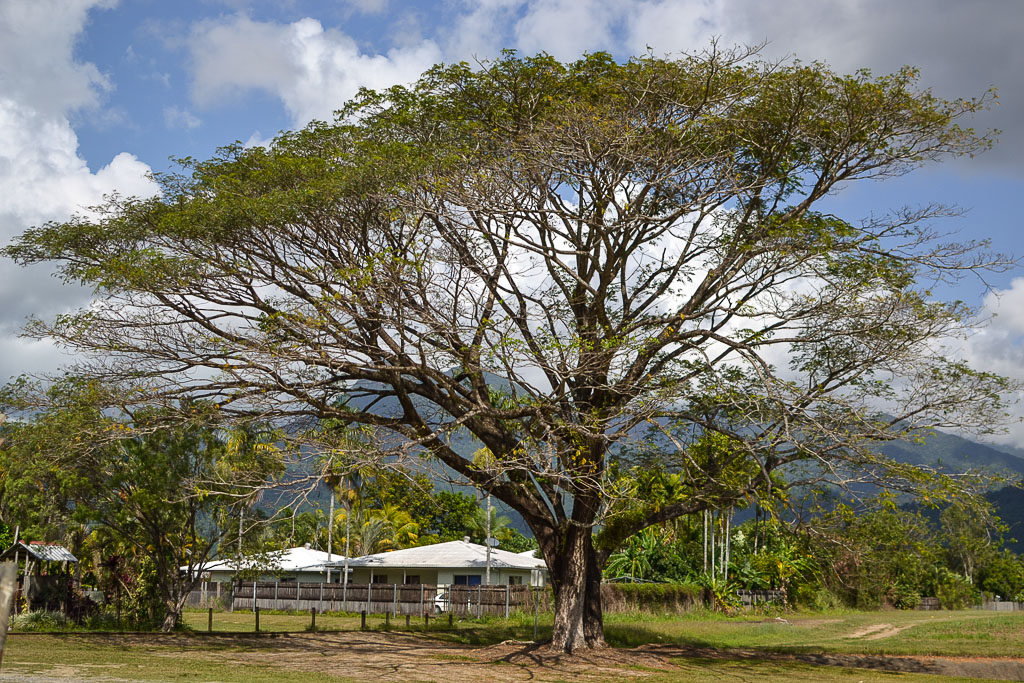 Near leafless tree in the dry season (Port Douglas, Australia) 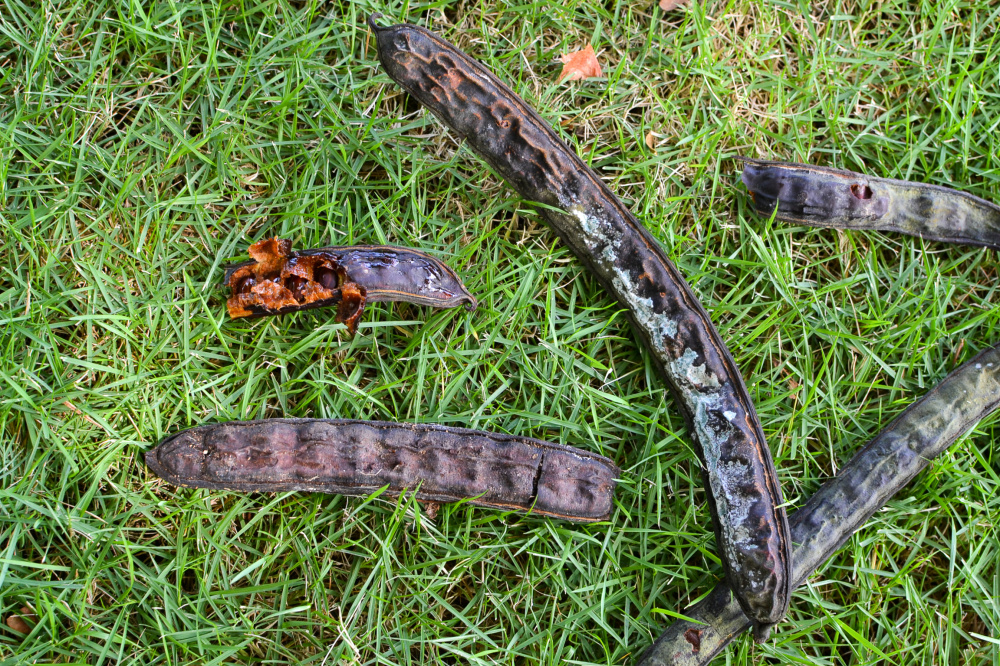 Guango produces a medium-weight wood in the 450 to 640 kgs per cubic meter (28 to 40 lbs per cubic ft) range, putting it at the soft end of the hardwood scale.

The heartwood is an attractive reddish-brown. When available, the logs are sawn into planks used for interior joinery, millwork, and fine furniture and cabinets. Large, free-form tabletops are sometimes made from wide-cut slabs taken from the massive trunk.

Selected roundwood lengths are sliced for decorative veneer or are carved into bowls and other woodcraft items. Wood from slow-growing trees tends to be low-shrinkage, allowing carvings and other woodwork to be done using the green wood, which can then be air-dried with minimal to no cracking or splitting.

It is a common tree in tropical pastures, where it serves as a shade tree for livestock and to provide supplemental feed during the dry season by way of its seedpods. The mature seedpods are relied upon, particularly in the time between the end of the dry season and after the first rains, just before there is sufficient grass to support grazing. During this time, the seedpods fall to the ground in great numbers where cattle and other ruminant livestock eagerly browse them.

The seedpods are made palatable to livestock by thin layers of a sweet, sticky molasses-like substance in their shell. They have a crude protein content of between 13% and 18% of their dry weight.

The new leaves are also highly palatable, with a crude protein content of between 20% and 30% of their dry weight. Still, these are not usually within reach of browsing livestock.

The bark, on wounding, exudes a dark gum partially soluble in water, swelling to a tough cartilage-like mass. It was reportedly sold at one time in the Mumbai markets in India, but its use remains unclear.

It is a commonly planted amenity tree in parks, parking lots and along roadsides in urban areas, mainly for the shade its wide-spreading crown provides.

Guango grows naturally and has its best development in sub-humid to humid tropical lowland climates, generally areas with annual lows of 17 to 25°C, annual highs of 25 to 35°C, annual rainfall of 700 to 4500 mm and a dry season of 6 months or less.

New plants are usually started from seed that remain viable for several years under cold, dry storage conditions and readily germinate when sown.

Performs best on free-draining clay-loam, loam, silt-loam and sandy-loam soils of a slightly acid to slightly alkaline nature, generally with a pH of 5.5 to 7.5, and on sites with full sun exposure. It has good tolerance to drought and seasonal flooding.

The seedpods are produced in abundance and fall to the ground over a wide area beneath the tree. Some are eaten by livestock and the seed carried with them, while the seed in those that remain germinate readily, sometimes leading to dense thickets.

It is recorded as a weed in more than one reference publication, including as having escaped cultivation and a weed of the natural environment in Australia. However, its assessment by the Hawaii Pacific Weed Risk Assessment (HPWRA) project has not found it a high weed risk for Hawaii.

Trees in the wetter parts of its range develop large, expansive surface roots, which can be invasive, potentially cracking surface concrete and building foundations. The fallen flowers and seedpods create a sticky litter.