Sugarcane is a tall grass originating from the Old World tropics, most probably highland areas of Papua New Guinea, and is the main source of the world's sugar, made from the sweet juice or sap in its stems. Its use, however, extends far beyond sugar production, with various parts of the plant used as raw material in a range of industries including energy, chemicals, natural fibres and livestock feed. 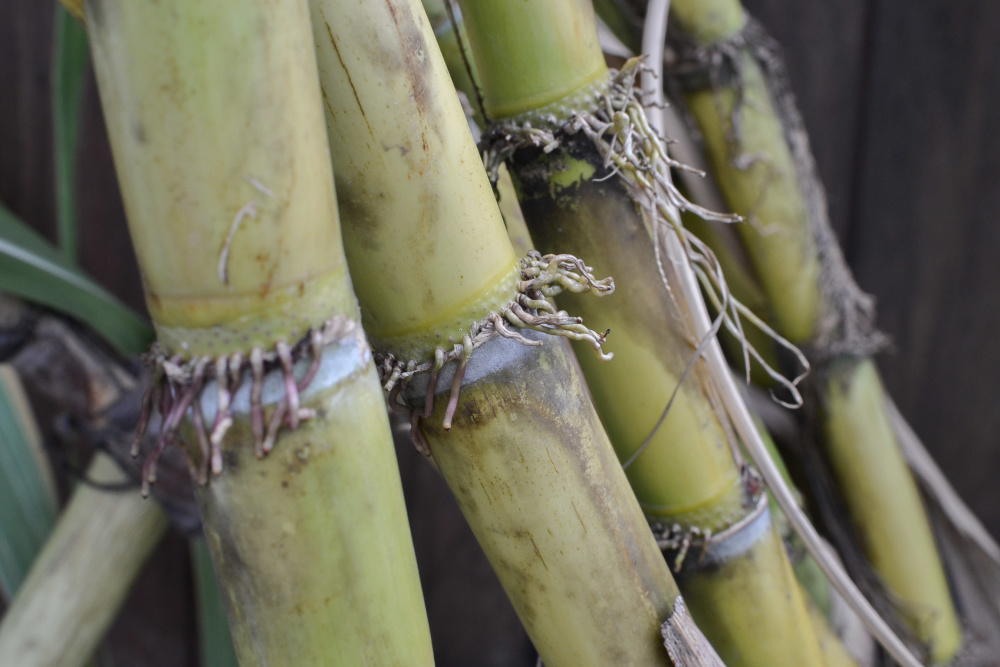 Between the joints is a smooth, hard exterior that protects a semi-soft, fibrous and juicy core. Known as the rind or peel, it has a waxy coating and can range in colour from lime green, through yellow or purple to near black or it may be variegated, depending on the variety. Also varying with variety are the stem diameter, rind thickness, amount of juice and juice sweetness.

The leaves are long, medium-green and sword-shaped, with sharp, serrated edges that can slice into fingers. These sprout from new growth at the top of the stems and have a vertical habit that adds to the height of the plant, in the end making-up almost one-third of the plant's height in total.

Flowering occurs when the plant reaches maturity and is induced by short days, or rather long nights. Tall flower-spikes arise at the top of the plant and hold aloft a large, triangular-shaped flower-head, which because of its shape is known as the arrow. Although sugarcane flowers profusely, the flowers rarely set seed.

Sugarcane can be divided into two main types according to its use: crystal canes, or the types used in sugar production, and chewing canes. Chewing cane, which as the name implies, is chewed, is the original use for sugarcane, with its cultivation dating back hundreds of years. Although still cultivated today, this is mostly only in home gardens for personal use.

Chewing canes are thick-stemmed canes with a relatively soft core and high juice and sugar content. Mature stems are usually cut into manageable lengths, the rind peeled away, sometimes with the teeth, and the soft, fibrous core chewed and sucked to extract the juice, then is spat out. Sometimes the peeled lengths are cut into bite-sized pieces, bagged and sold at the market or by the roadside.

Crystal canes, or canes used in the sugar production, tend to be slimmer-stemmed than chewing canes and have juice with a higher sucrose content, which causes it to crystallize more readily.

To make sugar from sugarcane, the stems are cut and pressed to extract the juice. The extracted juice is then filtered and boiled to evaporate off the water, leaving behind a syrup that is then crystallised to make raw sugar. Raw sugar, however, contains molasses, a thick, dark, almost black syrup that, despite having a high sugar content, cannot be crystallised, and so needs to be removed. Removing the molasses from raw sugar leaves behind refined white sugar. Refined brown sugar is made by adding back some of the molasses to white sugar. Castor sugar and icing (or powdered) sugar is simply made by finely grinding white sugar.

Refined sugar is the world's most widely available and consumed sweetener, being incorporated in many foods and drinks, making it a globally important energy food. In jams, jellies, fruit conserves, canned fruit and confectionery, it is used as both a sweetener and preservative.

Molasses, a by-product of the refined sugar making process, is arguably the most nutritious component of sugarcane juice, containing good amounts of potassium, calcium, magnesium, selenium, iron and Vitamin B6. Refined sugar, by contrast, is almost pure sucrose, with a high energy value but otherwise little or no nutritional value.

Most molasses is made into ethyl alcohol, otherwise known as ethanol, by fermenting it with yeast and water to make a solution commonly known as a 'wash', containing up to nine per cent alcohol. The wash is then distilled to extract the alcohol, traditionally in pot stills but in more recent times in sophisticated continuous column stills.

Ethanol was originally produced from sugarcane to make rum for drinking but other uses soon followed, including use as a solvent and carrier in perfumes and colognes, such as in Bay Rum, made by mixing rum with bay oil from the Bay Rum tree (Pimenta racemosa). In fact, Ethanol has come to be widely used as an industrial solvent, as it is effective in dissolving many organic materials such as gums, resins and essential oils.

More recently, Ethanol has been used as a fuel for internal combustion engines and is produced on a massive scale in Brazil and the United States for this purpose. It has also emerged as a material to substitute for petroleum in the production of plastic.

It takes around 2 to 3 litres (0.5 to 0.8 gallons) of molasses to make 1 litre (0.3 gallons) of rum. When freshly distilled, rum is a colourless liquid of around 50 per cent overproof, which means it takes 100 litres of it is to produce 150 litres of regular rum after diluting with water. Dark rum gets its caramel colour from the oak barrels in which it is aged, which on average is five years but can be up to twenty years or more for some premium-aged rums. Ethanol from molasses is also be used to make gin and vodka.

A small proportion of molasses, particularly of the lighter grades, is reserved for human consumption. Traditionally sold in jugs and jars, it has long been used in baking to make sweet buns and Christmas puddings. It is also used in candy confectionery, in barbecue sauces and gives Boston baked beans its characteristic sweetness and syrupy texture.

Molasses is also an important livestock feed, particularly during the dry season when there is little else for ruminant livestock to eat. It is usually mixed with the chopped-up cane tops and leaves or is poured over silage, hay or grains fed to cows, sheep and goats. It is also added to pig and chickens rations. Apart from being a good carbohydrate, molasses is highly palatable and so increases livestock acceptance of the other feeds mixed with it.

In traditional sugar-production, the molasses is not removed and the crystallisation and refining processes are skipped, resulting in a dark brown, semi-moist but highly nutritious sugar. Known as 'jaggery' or 'gur' in India and 'panela' in Latin America, it is usually moulded into shapes for easy transport, sale and storage but has a shorter shelf-life than refined sugar, due to its relatively high moisture content.

A less conventional use of molasses is to remove rust. Powerful chelating agents in molasses, mainly cyclic hydroxamic acid, actively bind with rust and make it soluble. The rust can then be simply washed off with water. However, rust-covered items need to be fully immersed in molasses for at least three months for the treatment to be effective.

Sometimes cane juice is not processed into sugar but is instead directly fermented and distilled. As is the case with Cachaça, a distilled spirit from Brazil best known for its role in the Caipirinha, a Brazilian cocktail made by blending shots of Cachaça with slices of lime, sugar and crushed ice. A similar spirit, known as Rhum Agricole, comes from the Caribbean island of Martinique. Sugarcane juice is also commonly enjoyed without alcohol, usually served chilled and with a squeeze of lime to balance its sweetness. 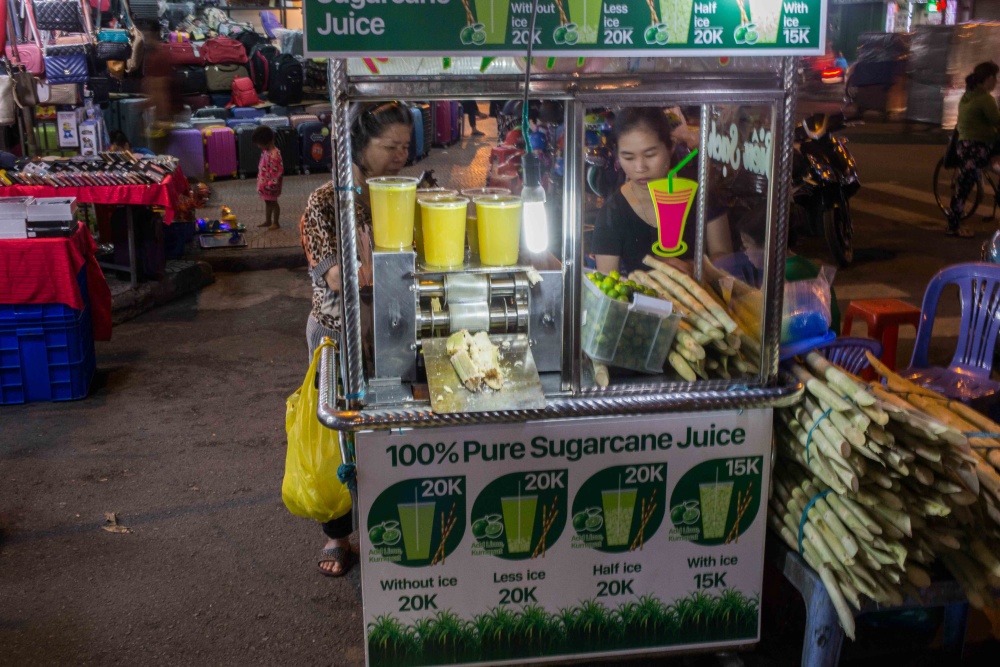 After the juice is extracted from the stems, a large quantity of fibrous material remains. Known as bagasse or megass it is usually burnt in giant boilers to produce heat, steam and in turn electricity to power the factory, and with any excess electricity exported to the grid. When not burnt as fuel, bagasse fibres are compressed into fibreboard for wallboards, panelling and acoustic tiles, and to make biodegradable packaging and food-service products, such as disposable plates, cups and take-away food containers.

Bagasse is also commonly baled and sold as a mulch under the name 'Sugar Cane Mulch'. Inexpensive, lightweight and easy to handle, sugarcane mulch works much like other mulches to conserve soil moisture, reduce soil erosion and suppress weeds. And because it breaks down quickly, it improves the soil, making it ideal for vegetable gardens.

Although bagasse is generally a poor fibre for paper pulp production, due to damage it sustained during juice extraction, it is of sufficient quality for making good newsprint and wrapping paper.

A hard, tan-coloured wax - similar to carnauba wax from the Wax palm (Copernicia prunifera) - is sometimes recovered from the residue and formulated into waxes for floors, furniture, and leather, and for making waxed paper. A ton of sugarcane yields from 1 to 1.4 kilograms (2 to 3 lbs) of wax.

Molasses is rich in calcium and iron, which helps promote good bone and tissue health.

Sugarcane grows naturally in humid subtropical and tropical and climates, generally areas with annual lows of 13 to 25 °C, annual highs of 22 to 36 °C, annual rainfall of 1200 to 5000 mm and a dry season of 3 months or less.

Sugarcane is also cultivated with irrigation in much drier areas, such as in El Centro, California and in the Nile Delta, in Egypt, both areas of which receive less than 100 mm of rainfall annually and are classed as dry for all 12 months of the year.

Not widely known is that for almost a thousand years sugarcane was cultivated in coastal areas in the Mediterranean. This mostly ceased after colonial powers established sugar plantations in the Caribbean and others parts of tropical America. Ruins of sugarcane mills still remain today in Motril, Spain, Syracuse, Sicily, Palestine and in the deserts of southern Morocco. Although sugarcane was still cultivated in Valencia, Spain in the eighteenth century, it was not made into sugar but was chewed as a refreshment.

These are planted horizontally or at a 45° degree angle in the soil, leaving one end about 5 cm (2 in) above the soil. Good practice is to grow the crop on soil mounds or ridges, so that the roots have enough room to grow down, and there is adequate drainage. The conventional method of planting in furrows increases the risk of waterlogging and subsequently rot.

Soil preparation and planting are carried out near the end of the rainy season, when there is sufficient soil moisture for good growth and development.

Performs best on deep, rich, friable and free-draining clay-loam, loam and sandy-loam soils of a moderately acid to slightly alkaline nature, generally with a pH of 6.0 to 7.7, and on sites with full sun exposure.

The leaves have sharp edges that can cause injury. There are also fine hairs on the leaf-sheath that can irritate the skin.