Castor bean is a shrub or small tree originating in tropical Africa and now widely distributed and cultivated for the oil in its seed, which has a range of industrial uses.

It is fast-growing, herbaceous when young, with age developing woody stems and forms either a shrub or small tree depending on the variety. Some trees reach up to 12 m (40 ft) tall, though between 3 and 5 m (10 and 16 ft) is more common. In tree form, the trunk is slender with smooth grey-white or light-brown bark and supports a rounded crown with a moderate number of large leaves.

The leaves are large, from 30 to 60 cm (1 to 2 ft) wide and star-shaped with seven to nine serrate, pointed lobes. They emerge bronze, gradually become green or wine-red in some varieties and attach to the branches with a long hollow leaf stalk.

Flowers unisexual, small, greenish-white and borne in conical flower spikes 15 to 60 cm (0.5 to 2 ft) long, with the male flowers situated below the female ones. They bloom on and off throughout the year but are at their fullest from spring to summer.  Fertilised female flowers are followed by burr-like seed capsules, blue-green or red when young, turning brown when mature with three brown or black mottled seed inside. When fully ripe, the seed capsule bursts open, scattering the seed. 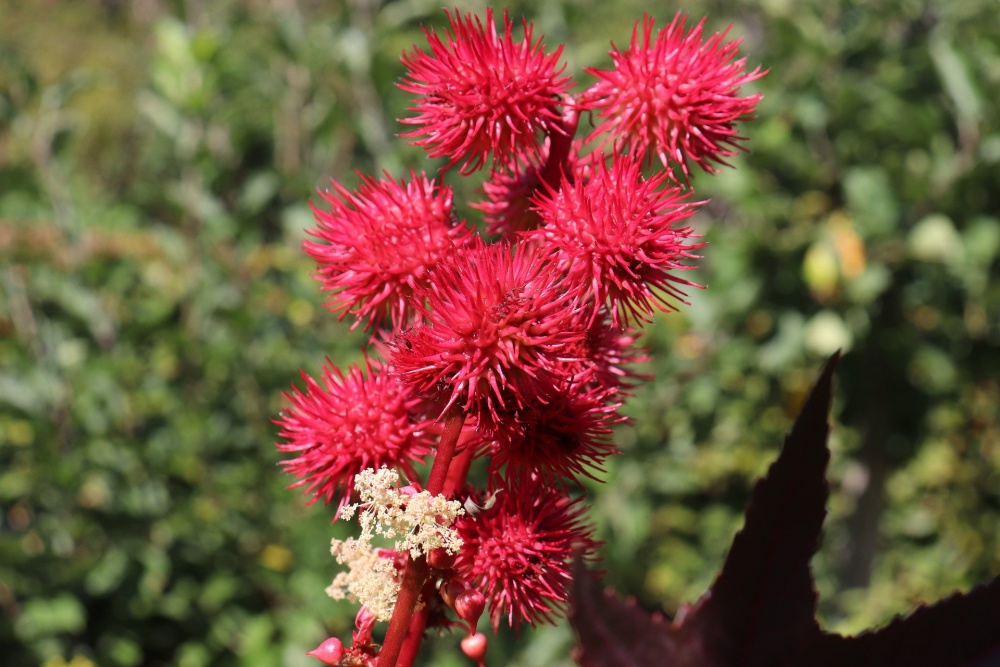 The seed yield on cold-pressing a colourless to pale yellow, viscid oil known as 'Castor oil' or 'Palma Christi oil'. On hot pressing, the oil is brown to near black. A highly toxic protein poisonous to humans and animals, ricin is present in the seed but is not passed to the pressed oil.

Oil yields are around 35 to 60% of the seed by weight. The leftover seedcake contains about 5% nitrogen, 2% phosphate and 1% potash and is mostly used to fertilise crops. It can also be fed to livestock if it is first heat-treated to destroy the ricin.

The oil maintains a constant viscosity at high temperatures making it a suitable lubricant, hydraulic fluid and brake fluid for machinery and moving parts operating under various temperature and pressure conditions. It has reportedly been successfully engine-tested as a Biodiesel.

Castor oil is commercially processed into Polyamide 11, a thermoplastic in the nylon family of polymers. Polyamide 11, also known as Nylon 11, is used in high-pressure hoses (particularly those used in the oil and gas industry), automotive tubing, electrical cables, textiles, footwear, and metal coatings (for noise reduction and to protect against corrosion).

Castor oil also has plasticizing properties. Meaning that when combined with other materials, it increases their plasticity and flexibility, effectively reducing their brittleness. It is used in plastics to make them more malleable or mouldable and in resins to make surface coatings, ranging from paint and varnish to nail polish. It has found use in face- or peeling masks, shaving cream, bath oils, hair-grooming products, lipstick and nail polish removers in the cosmetic industry. In confectionery, it is used as an anti-sticking coating and release agent in hard candy and, in pharmaceuticals, as a protective coating in pills.

Soap with castor oil has increased lathering power, is highly soluble in cold water, and is used in making transparent soaps due to its exceptional clarity.

It is estimated that more than half of all lipstick sold in the United States contains castor oil as an ingredient.

In India, Castor oil is prescribed for nervous disorders. It is well known for its strong laxative and purgative action, particularly in treating food poisoning and in excavating the bowel before an X-ray examination.

Castor bean flowers are highly susceptible to fungal disease brought on by humid conditions. For this reason, cultivation for seed production is best restricted to areas with a distinct dry season.

Grows naturally and is most productive in sub-humid to moderately humid subtropical and tropical climates, generally frost-free areas with annual lows of 14 to 26°C, annual highs of 26 to 36°C, annual rainfall of 700 to 2000 mm and a dry season of 3 to 7 months.

New plants are usually started from seed, which germinate readily. Performance is best on friable, free-draining loam and sand soils of a moderately acid to alkaline nature, generally with a pH of 5 to 8 and on sites with full to partial sun exposure.

Sowing is in the rainy season and is timed so that flowering occurs at the start of the dry season, thereby minimising the risk of fungal attack.

Castor bean takes from four to seven months to mature after sowing. The seed capsules are harvested when they become yellowish, when they are ripe but not fully mature. They are then left in shallow piles in the sun to dry, which takes about four to five days.

The seed contain ricin, a poison that is highly toxic to humans and livestock.

Castor bean trees bear seed profusely, and these are scattered when the seed capsule bursts open. It is recorded as an invasive species in more than one country. It is assessed as a high weed risk species for Hawaii and South Florida, respectively by the Hawaii Pacific Weed Risk Assessment project (HPWRA) and the IFAS Assessment of Non-Native Plants in Florida's Natural Areas.

Pollen produced by male flowers is known to cause hay fever in some people.