Originating in India and Sri Lanka, this landscape tree grows moderately slowly to between 10 and 18 m (30 and 60 ft) tall.

There are two varieties in cultivation. The more striking, var. pendula, has a straight slim trunk and short branches that droop, resulting in a narrow columnar shape not usually seen in tropical trees. The less common variety, var. angustifolia, has branches that are more wide-spreading, forming a pyramidal crown. The bark is grey and smooth.

Leaves lance-shaped with wavy margins and either bronze, lime green or dark green, depending on their age. They remain on the tree in all seasons and in a dense arrangement that almost completely cloaks the trunk in lush greenery, from near the bottom to the top of the tree.

For a brief period in spring, masses of pale yellow-green star-shaped flowers bloom amid the leaves. These are followed by green coffee-berry-like fruit with a single seed, ripening to dark purple or near black from summer to autumn. 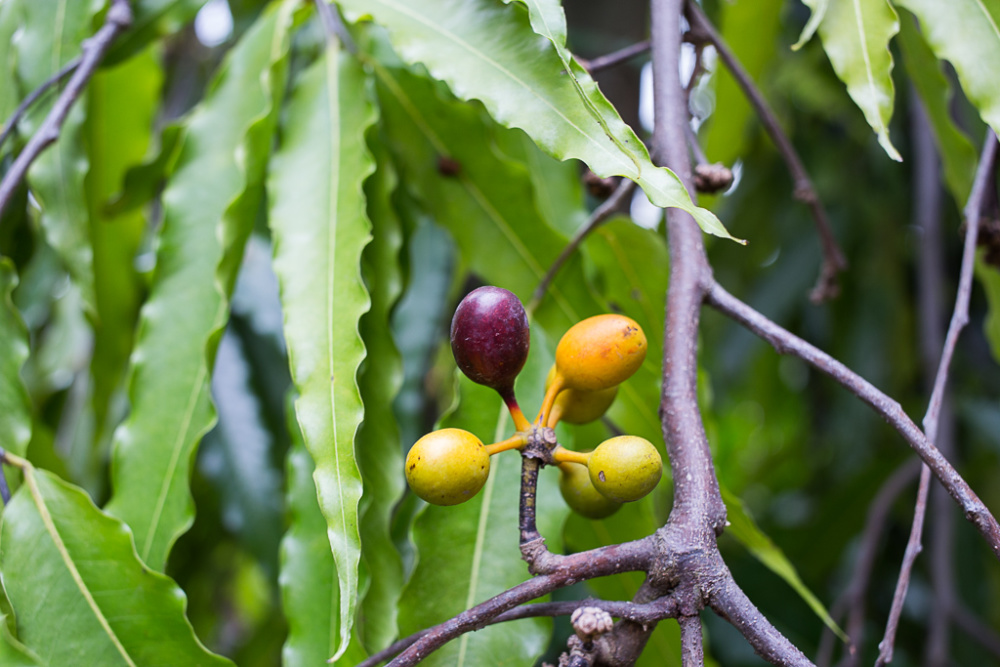 Fruit at various stages of ripening

The narrowly shaped weeping variety, var. pendula, is widely cultivated as a street tree in India, Sri Lanka and Southeast Asia for its compact form and lush green foliage. When closely spaced it forms a tall hedge useful for privacy screening, shade or as a windbreak.

The small diameter trunk produces a yellowish to grey-white wood of medium weight, averaging out at around 590 kilograms per cubic meter (37 lbs per cubic ft), but with low natural resistance to rot and decay. It is reportedly only suitable for making light articles such as matches and pencils, though it is also crafted into musical drums in parts of its native range.

The botanical name Polyalthia comes from the Greek words poly, meaning "many", and althia (derived from àltheo), meaning "cure". However, there does not appear to be widespread use of the plant for medicinal purposes.

Grows naturally in sub-humid to humid subtropical and tropical climates, generally frost-free areas with annual lows of 16 to 25 °C, annual highs of 25 to 35 °C, annual rainfall of 800 to 3800 mm and a dry season of 8 months or less.

New plants are usually started from seed, which remain viable only for a relatively short time. After they are collected, the ripe fruit are left in the open for the rind to rot and soften, so that the seed can be easily removed. The seed are then washed and air-dried under shade. Most germinate within two to three weeks and the young seedlings cared for in a nursery for around a year before being planted out. Care should be taken when transplanting to not damage the delicate roots.

It performs best on sites with full to partial sun exposure and on rich, free-draining clay-loam, loam, sandy-loam and loamy-sand soils of a slightly acid to neutral nature, generally with a pH of 5.5 to 7.5. Young plants need protection from winds, especially under hot, dry conditions but once established have good tolerance to drought.

The fruit attracts feeding bats and birds which disperse the seed. However, there does not appear to be any records of its escape and naturalisation anywhere, despite it being widely cultivated outside of its native range. It is assessed as a low weed risk species for Hawaii by the Hawaii Pacific Weed Risk Assessment project (HPWRA).