Red Frangipani is a flowering shrub or small tree originating from Central America, where it occurs naturally in seasonally dry areas extending from Mexico to Panama.

It may reach heights of up to 12 m (40 ft), though is more commonly 3 to 7 m (10 to 23 ft) tall and develops a stout trunk, off of which grow spreading and ascending branches forming an umbrella-shaped crown, the width of which may equal the height of the plant.

The stems have smooth grey bark and are semi-woody and succulent, storing moisture that allows the plant to survive through a long dry season. When wounded, they bleed a sticky white latex.

Leaves elongated oval, 20 to 50 cm (0.7 to 1.6 ft) long, pointed at the tip, on top dull dark green and prominently ribbed, underneath pale green. They are spirally arranged at the ends of the branches and in the dry season fall to conserve water, leaving the branches bare and exposed.

The flowers come in a variety of shapes and colours, due mostly to selective breeding but also as a result of natural cross-pollination with other compatible Plumeria species. In the main, they are fan- or pinwheel-shaped with five overlapping petals, measure 5 to 7.5 cm (2 to 3 in) across and come in reds, pinks, purples, oranges and whites, some with yellow centres.

Flowering is long-day induced, with the flowers coming into bloom from spring through autumn, in showy clusters arising at the ends of the branches, strongly contrasting the dark green of the leaves. They are followed by twin seedpods 12.5 to 25 cm (5 to 10 in) long, green when young becoming brown and dry when mature and with large winged seed inside, each up to 5 cm (2 in) long. 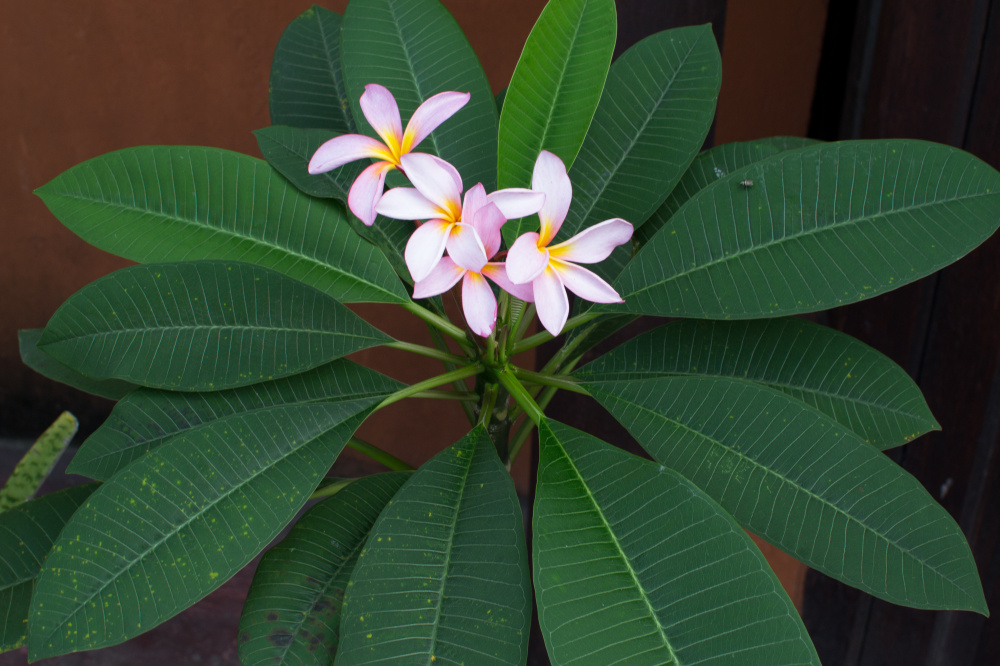 Red Frangipani is widely cultivated as a flowering ornamental and specimen shrub, or small tree, for its distinctive and conspicuous candelabra shape, large lush green leaves and brightly coloured waxy flowers, their sweet fragrance an added bonus. The flowers are at their most fragrant in the evening and at night to attract moths, the plant's specialist pollinators, with very little if any fragrance exhaled during daylight hours. The plant's tolerance to drought, alkaline soils and salt spray makes it a good candidate for seaside gardens.

The flowers resist wilt for longer than most tropical flowers and this has led to their use in bouquets and floral necklaces such as garlands and traditional  Hawaiian leis. Their sweet fragrance, which persists long after they have fallen off the tree and dried, has also led to their use in clothing and linen cupboards to scent the clothes and sheets stored therein.

A fragrant waxlike substance, known as an essence concrète, is extracted from the flowers using a volatile solvent, usually hexane. This substance is then washed with alcohol before being concentrated into the essential oil known as 'Frangipani oil'. The oil gives off a strong and lingering rosy odour that finds use in fine perfumery, particularly heavy-Oriental floral perfumes such as 'Coco', 'Mystere' and 'Sweet Courrèges'.

The latex is used externally in traditional medicine to relieve itchy skin and to treat warts.

In some areas, large caterpillars known as the 'Frangipani Caterpillar' eat the leaves. They can be up to 15 cm (6 in) long with a bright red head and a charcoal black body ringed with up to ten yellow bands. They take in the poison in the latex and themselves become poisonous, the birds knowing not to eat them. When ready to pupate, they head down the trunk to under the leaf litter and emerge later as Giant Sphinx Moths (Pseudosphinx tetrio) with wingspans of up to 14 cm (5.5 in).

Grows naturally in sub-humid to humid subtropical and tropical climates, generally in frost-free areas with annual lows of 11 to 25 °C, annual highs of 22 to 37 °C, annual rainfall of 400 to 3500 mm and a dry season of 9 months or less.

New plants can be started from seed or cuttings. Cuttings are preferred because they readily and quickly strike root and the flower colour will be the same as the parent plant, which may not be the case in seed-raised plants due to cross-pollination. Cuttings should be from 50 to 80 cm (1.6 to 2.6 ft) long and left for two weeks in the shade to dry, which improves their strike rate, or readiness to root.

Performs best on free-draining loam and sand soils of a moderately acid to moderately alkaline nature, generally with a pH of 5.0 to 8.5, and on sites with full to partial sun exposure. It has good tolerance to limestone soils.

Red frangipani is recorded as having escaped cultivation, as naturalised in many countries around the world and as a weed in Puerto Rico. However, there does not appear to be any record of it anywhere as a serious weed.

It is assessed as a low weed risk species for Hawaii and Florida, respectively by the Hawaii Pacific Weed Risk Assessment project (HPWRA) and the IFAS Assessment of Non-Native Plants in Florida's Natural Areas.

The latex is very irritating to the skin of some people after prolonged contact and may cause burning and blistering. Taken internally it is a powerful laxative and in large amounts causes increased urination, diarrhoea and gastroenteric irritation.