Ⅰndian gooseberry or Amla is a fruit-bearing and medicinal tree originating in India and Southeast Asia. Its natural range extends across much of the Indian subcontinent, from the foothills of the Himalayas to Sri Lanka and from Bangladesh, east to Myanmar (Burma), Thailand, Malaysia, Vietnam and southern China.

It is a fast-growing tree and may reach up to 30 m (98 ft), though it is typically 10 to 15 m (32 to 50 ft) tall with a slender, often crooked trunk, fluted at the base supporting a wide-spreading crown. The bark is grey-brown and flaking off in thin pieces, revealing yellow underbark, giving the trunk a mottled appearance.

Leaves are feathery and finely textured, consisting of small dull green elliptical leaves up to 2 cm (0.8 in) long, arranged opposite, in rows along thin branchlets. In the dry season, they fall off the tree to conserve water, leaving the branches bare and exposed until the rainy season. The new leaves emerge soft and pinkish, then harden and become green.

The flowers are tiny and insignificant, greenish or pink and borne either female or male along the branchlets. They bloom in spring, induced by increasing day-length, around the same time the new leaves emerge. The small round fruit that follows are 2 to 3 cm (0.8 to 1.2 in) in diameter, with thin, pale green skin and crisp, very sour pulp surrounding a hard nut. They ripen to yellow-green about six to nine months after fruit-set, usually from autumn to winter. 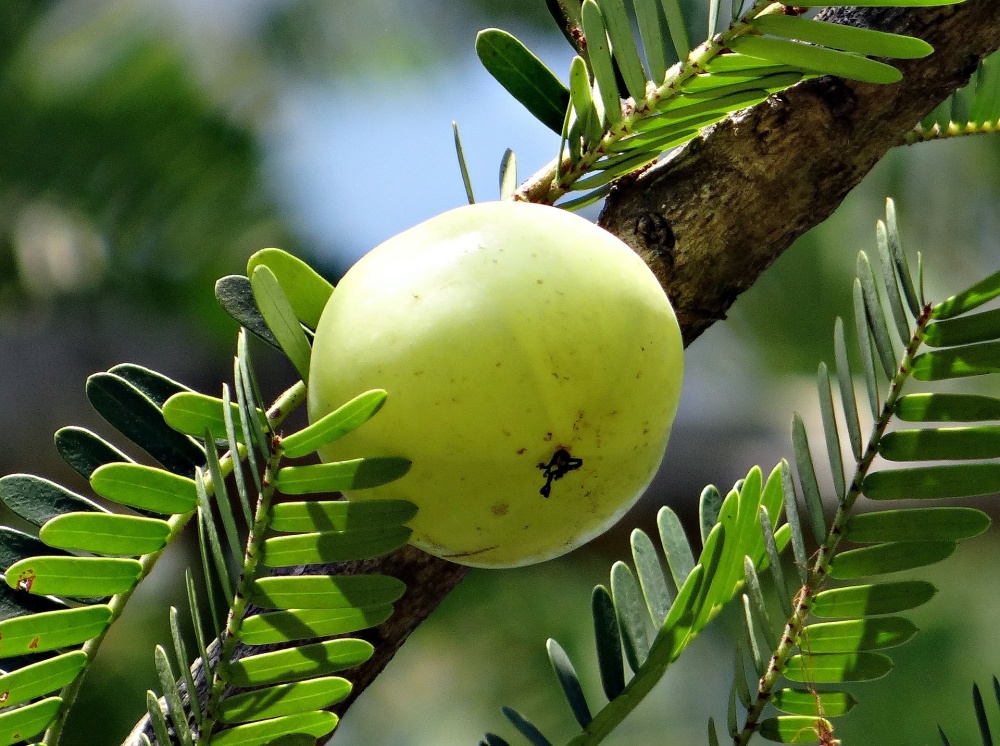 Photo by sarangib from Pixabay

Even when ripe, the fruit are sour and astringent. They are rarely eaten fresh out-of-hand and are instead traditionally made into preserves, including pickles and relishes or are dried and candied and eaten as a sweet. The pulp is high in vitamin C, reportedly containing about 700 mg per 100 grams of fruit, and rich in antioxidants. Nowadays, it is pureed and dried into a powder marketed as a health food or superfood.

The pulp is also used in pastry fillings, with other fruit in chutneys or is juiced and used as a souring agent in cooking, similar to Tamarind (Tamarindus indica) or to flavour drinks, vinegar, syrups and cordials. It is also high in pectin and therefore ideally suited for making jam.

The wood is reddish, heavy, averaging about 750 kgs per cubic meter (47 lbs per cubic ft), has good natural resistance to rot and decay and is durable under water. However, the logs are mostly poorly formed or small in diameter, which makes sawing them into lumber impractical. When available, it is mainly used for firewood or for making charcoal.

The flowers are observed being actively worked by honeybees. Still, information on its value as a bee-forage and honey tree is limited.

In vitro studies using ethanol extracts of the pulp have shown a strong cardioprotective effect against doxorubicin-induced cardiotoxicity. 'Doxorubicin' is an important and effective anticancer drug widely used to treat various cancer types. Still, its use is limited by dose-dependent cardiotoxicity.

Grows naturally in sub-humid to humid subtropical and tropical climates, generally frost-free areas with annual lows of 12 to 25°C, annual highs of 23 to 35°C, annual rainfall of 600 to 4200 mm and a dry season of 8 months or less, extending to 12 months with irrigation or groundwater.

New plants can be started from seed, but the germination rate is low, and those that are viable fail to germinate after twelve months in storage. Seedlings are also not true-to-type, producing inferior fruit. So selected varieties are best propagated vegetatively, using either cuttings or air-layering (circumposing) techniques.

Performs best on free-draining clay, loam and sand soils of a moderately acid to alkaline nature, generally with a pH of 5.0 to 8.5, and on sites with full to partial sun exposure. Established trees have good tolerance to drought and alkaline or limestone soils.

Seedling trees start flowering and fruiting when about seven to eight years old, compared to around five years for vegetatively propagated trees. Mature trees yield on average between 100 and 150 kgs (220 and 330 lbs) of fruit annually.

It is recorded as escaping cultivation and as a weed of agriculture in Australia. Still, there does not appear to be any record of it anywhere as an invasive species.