Date palms originate from the Arabian Peninsula and are commonly associated with oasis environments in desert regions. Nowadays, they are cultivated in many dry regions of the world, including North Africa, Pakistan, north-west India, central and western Australia, the south-west of the United States and parts of South America, such as Margarita Island off the north-eastern coast of Venezuela.

It is a naturally tall palm and may attain a height of up to 30 m (115 ft). However, it is more typically under 20 m (65 ft) in cultivation. As a result of selective breeding, it comes in many varieties and forms, including dwarf ones.

The trunk is round, stout and covered in overlapping, upward-pointing leaf bases that persist after the old leaves are shed. Suckers sprout from the base, growing to form multi-trunk palms if allowed to do so.

The leaves, or fronds, are up to 7 m (23 ft) long and typically palm-like, with pairs of grey-green leaflets arranged along their length. They are erect and spreading, forming a loosely rounded crown, often with a skirting of dead fronds.

Flowering starts when the palm is about five to seven years old and occurs in spring. The flowers are small, cream-coloured and in large branched clusters of either female or male flowers on separate palms. For fruit to be produced, the flowers on female palms must be fertilised by pollen from male palms, and this transfer only happens naturally with the assistance of the wind.

Fertilised flowers develop into fleshy oval fruit up to 8 cm (3 in) long with a single seed inside. Green when young, they become yellow to deep orange when ripe, around six months after fruit-set and usually in the dry season, becoming eventually dark brown when fully dry. 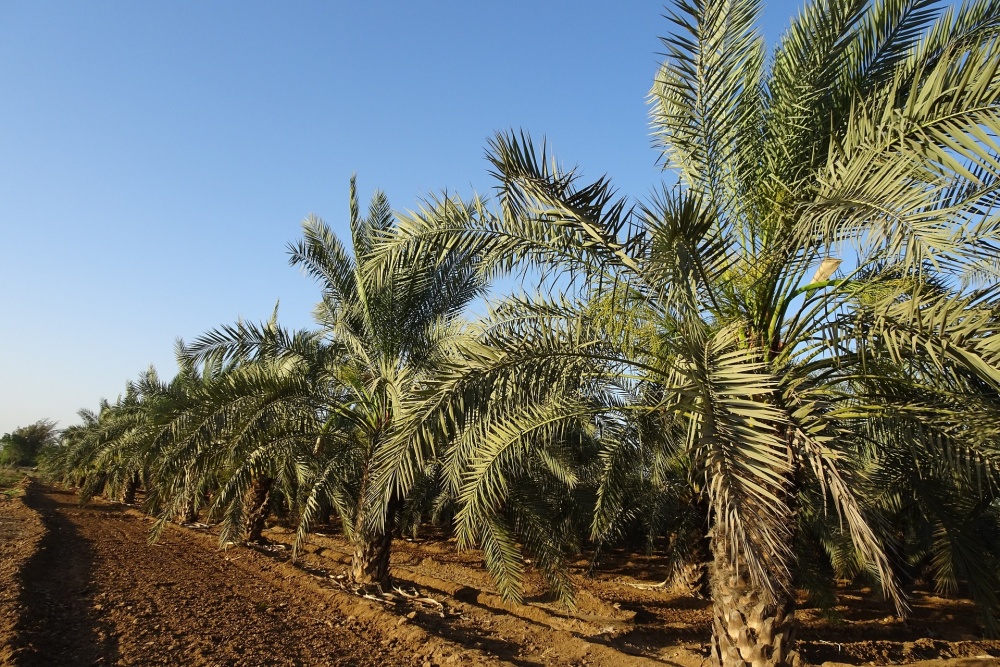 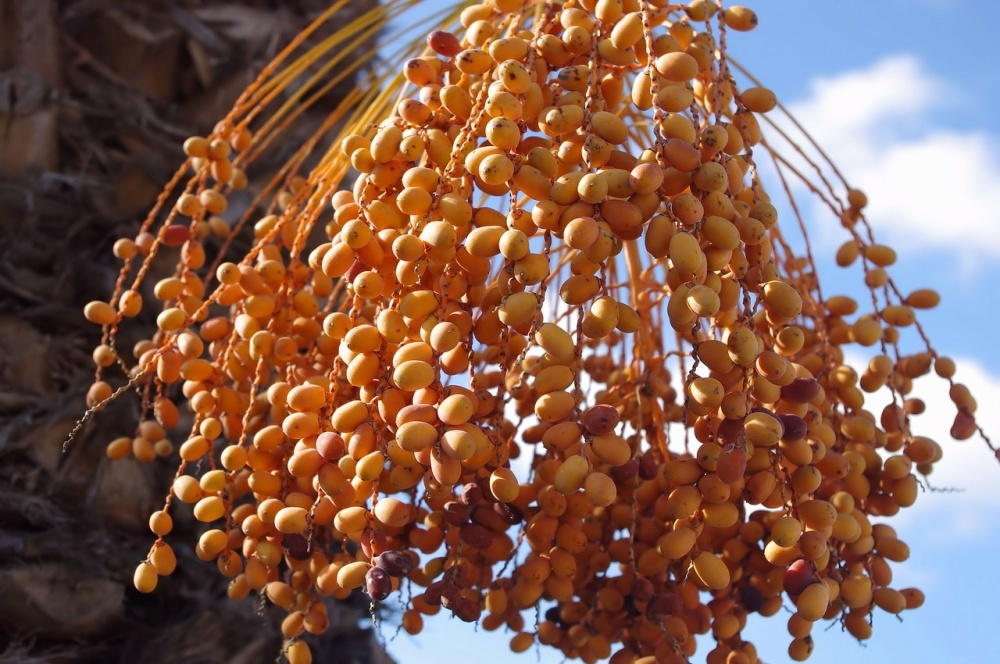 Image by PublicDomainPictures from Pixabay

The ripe and dehydrated fruit are eaten mostly out of hand. Texture, sweetness, and flavour vary depending on the variety. Still, they are generally soft, sticky, sweet, and full of concentrated sugars once dried and with flavours reminding of honey, brown sugar, or caramel. Surplus fruit are chopped and used in baked goods, chilled desserts such as ice cream and yoghurt, or made into jam, date sugar, juice, syrup, vinegar or alcohol.

Dried dates are rich in carbohydrates, much of which are sugars. They also have a good amount of vitamins and minerals, particularly potassium, magnesium, vitamin B2 (riboflavin) and vitamin B3 (niacin).

Although naturally adapted to Mediterranean and desert climates, with dry summers and modest rainfall in winter, date palms produce fair to good quality fruit in dry summer tropical savanna climates, generally areas with annual lows of 9 to 25°C, annual highs of 23 to 37°C, annual rainfall of 400 to 900 mm and a dry season of 5 to 8 months, extending to 12 months with irrigation or groundwater.

Dates need a good amount of heat (known as 'heat units') to ripen fully, and this is generally only achieved in areas where the average high of the warmest month is above 30°C (86°F).

New plants are usually started from suckers that sprout from the base of mature palms. The suckers are dug up when around four to eight years old and large enough to have a good chance at survival. Still, they should not be too large to make removing them difficult and risk damaging their roots. After two years in a nursery, they are ready to be planted out.

Raising plants from suckers has significant advantages over seed-raised plants, including knowing the sex of the plant, which helps with establishing a good male to female ratio. According to some references, this ratio should be one male to as many as fifty female plants.

Plants perform best on free-draining clay, loam and sand soils of a slightly acid to alkaline nature, generally with a pH of 6 to 8.5, and on sites with full to partial sun exposure. Date palms have good tolerance to drought, alkaline soils and moderate salinity.

Bagging the fruit bunches is recommended to protect the fruit against insects, birds and other pests. Permeable nylon bags are preferred as they also allow air to flow through the bag, helping the fruit dry after any poorly timed rain event, reducing the risk of fungal attack. This practice is essential in areas receiving rainfall over the flowering and fruiting period.

Another practice to increase airflow around the fruit and prevent delayed ripening (or encourage early ripening) is to thin out the fruit on the stalks to every alternate fruit. This is done soon after fruit-set and results in larger fruit, which normally fetch a premium price.

Of the more popular varieties, 'Barhi' or 'Barhee' is probably the best suited to areas at the high end of the rainfall range because the fruit can be harvested early, in the pre-dry stage (known as the early 'Khalal' stage), when they are still somewhat crunchy. After harvest, the fruit are dried under cover in a well-ventilated room and then heat-cured to destroy any insects and further reduce their moisture level. 'Barhi' is also arguably the best tasting date variety due to its soft, melting honey and caramel flavours.

The Date palm is recorded as a significant weed, and invasive species in some areas where introduced. It is assessed as a high weed risk species for Hawaii by the Hawaii Pacific Weed Risk Assessment (HPWRA) project.