Beefsteak mint, as the name suggests, is a mint relative and originates from India and Asia, where it is cultivated as a culinary herb, medicinal plant and oil-producing crop. It is particularly popular in Japan, Korea, China and Vietnam, where the leaves are used in a wide range of dishes.

An annual herb, it is fast-growing to around 1 m (3 ft) tall, though may be up to 2 m (6 ft) tall when in flower, with flower-spikes that rise high above the leafy portion. Being a mint relative, the stems are four-sided with a covering of fine hairs and may be green or purple, depending on the variety. Because of its rapid growth, the plant tends to develop a single stem without much side-branching.

Leaves heart-shaped, up to 15 cm (6 in) long, finely hairy, prominently veined and come in either green, purple or bi-coloured varieties and with smooth or wavy margins. They are arranged opposite along the stems and, despite being a member of the mint family, have a distinctly un-mint-like aroma when bruised or rubbed.

Beefsteak Mint is day-length sensitive, with flowering initiated by short days (or long nights), a feature of tropical regions. The flowers are borne on slender flower-spikes that arise from the leaf nodes and the top of the plant. They are numerous, very small, two-lipped and light purple, pink or white.

The fertilised flowers are followed by small seed capsules with tiny round seed inside. These rattle within the capsule when the plant is brushed against or shaken.

The leaves have a strong, herby aroma reminding of coriander, Thai basil and cinnamon, and with a hint of citrus. They are mostly eaten fresh, as an accompanying herb in Asian dishes, in salads and as a garnish. They are also cooked, for example for tempura in Japan and are an essential ingredient in a range of condiments, pickles and spice mixes found in Asia. The leaves of the purple coloured variety are used in Japan to impart a purplish or reddish colour to pickled ginger and pickled plums.

The seed are sometimes ground and made into a spicy condiment in north-east India and are incorporated whole as a grain in baked goods. However, most of the seed is used as animal feed for pet birds and poultry.

Perilla seed contain on average 38% of an edible, deep yellow or greenish oil known as 'Perilla oil' that is extracted using cold-press methods. It is sometimes used in cooking but does not have a long shelf-life in its pure form, due to a high content of linolenic acid, an omega-3 fatty acid. The seed are more commonly roasted before pressing to develop a savoury nutty oil, in a process similar to that used for making sesame (Sesamum sp.) oil.

Perilla oil is what's known as a drying oil, forming a hard film on exposure to air, which has led to it being used for industrial purposes, including waterproofing paper and as a substitute for linseed oil in the production of paints, varnishes and inks. The leftover seed-cake is reportedly rich in protein as well as fibre and is a suitable livestock feed. 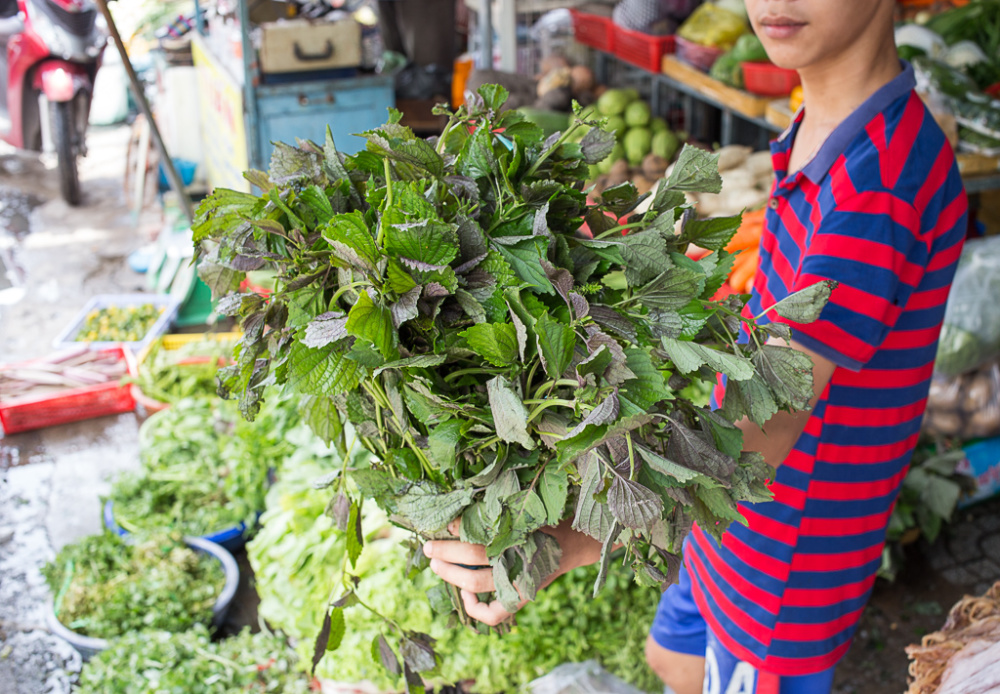 Perilla oil has one of the highest concentrations of alpha- linolenic acid (around 60%) of any vegetable oil. Alpha-linolenic acid is an omega-3 fatty acid, which is more commonly associated with fish oil, and this has led to Perilla oil being touted as a possible plant-based replacement for fish oil.

A decoction of the herbaceous parts is used in traditional Vietnamese medicine for treating influenza, coryza and headache.

Grows naturally as an annual in warm-temperate, subtropical and tropical climates, generally areas with annual lows of 6 to 25°C, annual highs of 14 to 35°C and annual rainfall of 1000 to 5000 mm. Beefsteak mint is also cultivated with irrigation in much drier areas.

In Japan, beefsteak mint is separated into two classes, 'Shiso' for leaf producing and 'Egoma' for seed-producing varieties. Of the leaf producing class, numerous varieties are available but green and purple leaves are the main variants. Generally, green leaf variants are considered to have the best flavour. A minor variant, which has bi-coloured leaves, with green colouring on the upper surface and purple underneath is favoured in Vietnam but is less esteemed elsewhere.

Some named varieties include 'Hojiso' (or ear shiso), a Japanese variety grown for the young leaves and flower buds, which are used in pickling, and 'Tia To' (or Tiet To), a two-coloured Vietnamese variety particularly suited to warm climates.

New plants can be started from seed or stem cuttings. Because the seed are very small, they are best sown first in a seed tray and then transplanted afterwards to growing-beds. Cuttings 10 to 15 cm (4 to 6 in) long placed in a free-draining sandy medium usually strike root from the nodes within one to two weeks.

Perilla is best cultivated in spring to early summer in subtropical areas and during the rainy season in tropical areas, when there is sufficient soil moisture for good growth and leaf production.

Suitable soils for cultivation are light, free-draining and rich in organic matter. Sandy-loam and loamy-sand soils enriched with organic matter and adjusted to a moderately acid to neutral pH, generally in the 5.5 to 7.5 range, are considered optimal. The soil should be kept moist if the plants are exposed to full sun, otherwise they tend to suffer from moisture stress and become scraggly as a result.

Plants cultivated on a sunny site can usually be first harvested around thirty days after transplanting. Repeatedly pinching out the flower spikes as soon as they appear helps encourage side branching and the development of a bushy, more attractive plant with greater leaf production.

Beefsteak mint has invasive attributes, with the small seed carried on the wind or by water to new locations. As a consequence, it is registered as a weed by the US Forestry Service, although is not thought to pose a serious threat to the ecosystem. However, the plant is reportedly highly poisonous to livestock, including horses.