Sacred lotus is a water-dwelling ornamental and food plant originating in Asia and the Pacific, its natural range extending from China and Korea, south through Japan and Southeast Asia, to northern Australia. Nowadays, it is naturalised in many parts of the world, introduced long ago as an ornamental.

It grows in partially submerged clumps 1 to 1.5 m (1.5 to 3 ft) tall and up to 3 m (10 ft) wide, made up of light green, erect, herbaceous stems that sprout from submerged rhizomes. The rhizomes resemble a string of linked sausages, and each rhizome usually carries three to four sausages. These have a spongy texture and develop air-filled channels at the centre, which causes them to be buoyant.

The sprouting stems hold above them saucer-shaped leaves, some floating and some held high above the water. They are bluish-green, range in diameters up to 80 cm (2.6 ft) and have a waxy surface that causes water droplets on them to bead.

The flowers are up to 20 cm (8 in) across when fully open, with large oval petals, pointed at the tip. As a result of selective breeding, they come in pink, red, white or bicoloured variants. Like the leaves, they are held high above the water on erect stems and bloom throughout the year. They open early in the morning then close in the afternoon for three successive days before dropping their petals.

Green, cone-shaped seed-heads follow the flowers, their flat-faced, perforated top making them somewhat resemble a shower-head. Those that are fertilised develop marble-sized seed, which, when mature, exit from the perforated openings. 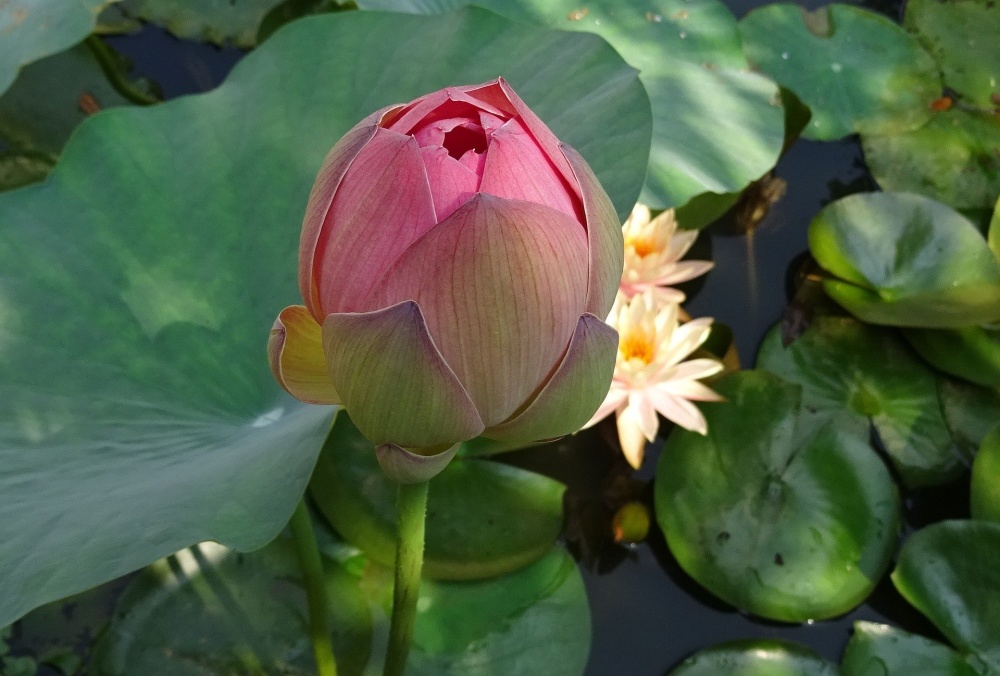 Varieties cultivated only for their flowers themselves come in many different forms, including dwarf forms and in a varying array of pinks, reds and whites. The flowers are spectacular in bloom, and the saucer-shaped leaves are equally eye-catching. They are best grown in large, preferably round containers so that the rhizomes can coil without breaking, and their spread is kept under control.

Rhizome producing varieties have large rhizomes up to 90 cm (3 ft) long divided into sausage-like segments. These can be sliced and eaten as a vegetable, either raw in salads or cooked. Thinly sliced in cross-section, the round slices have the appearance of a wagon-wheel, on account of the air-filled channels that run along the length of the sausage, making them highly decorative. They have a bland taste but crisp texture, even after cooking, and are a good substitute for Chinese water chestnuts in stir-fry dishes. They can also be deep-fried in oil to make chips or crisps, which nowadays are sold as packaged snack food in many Asian countries. Or they can be made into tempura or a pickle.

A highly digestible, gluten-free flour or starch, similar to Arrowroot (Maranta arundinacea), is prepared from the rhizomes and is known in China as 'Ou fen'. It is commonly used as a thickening agent for soups, stews, sauces and puddings.

The small young leaves, 10 cm (3 in) in diameter or less, are eaten raw. They are either tossed into a salad, usually seasoned with sesame oil, or substituted for lettuce in 'Sung choi bao', an Asian dish of minced, spiced meat wrapped in a leaf and eaten as an entrée (appetizer). The large, mature leaves are not eaten but are dried and used in Asia to wrap sticky rice and meat into parcels for steaming. They impart a sweet, earthy aroma to the dish.

The seed are eaten raw before they are fully mature, or when mature, are roasted, boiled or popped like popcorn. The immature seed have a thick, green seed coat, a thin inner coat and a bitter green embryo, all of which need removing before eating, leaving only the white portion of the seed in two halves. They have a crunchy texture and sweet, nutty flavour reminding of almonds or sunflower seed. They are eaten out-of-hand or used as an ingredient in a variety of sweet and savoury dishes.

The cone-shaped seed-heads with the stem attached are a popular cut-foliage, particularly in hand-ties and adding texture and interest to exotic floral arrangements. They keep well in cool storage at 12 to 15°C (54 to 59 °F) and are long-lasting in arrangements when a conditioner is added to the vase water. They also dry well, turning from green to dark brown, and are well-suited to dried arrangements. The flowers can also be cut for floral arrangements but have a relatively short vase-life of only three to four days. 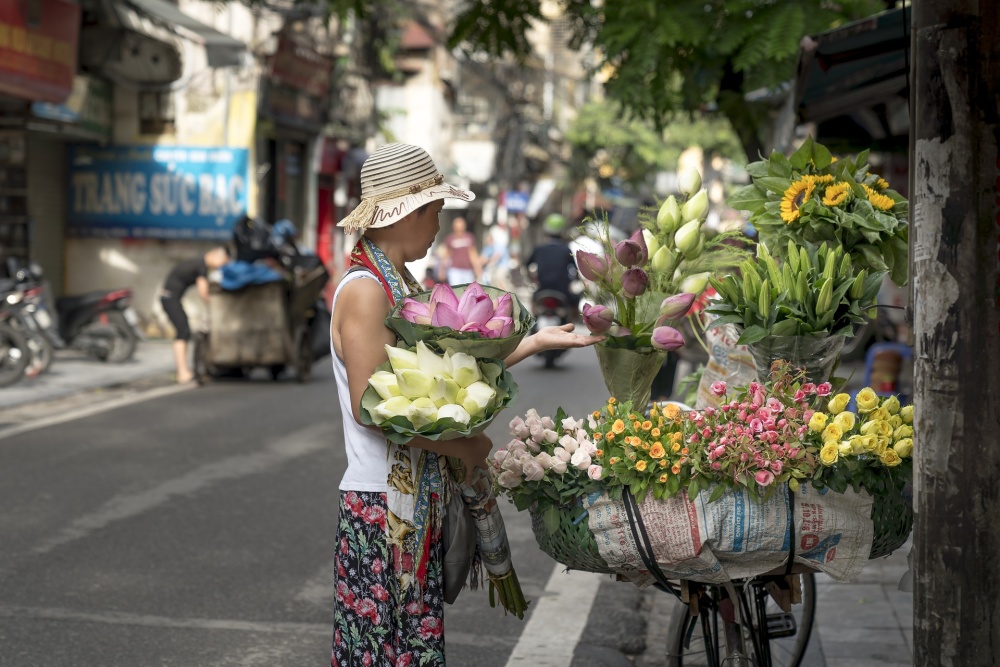 Sacred lotus is the national flower of India and is considered sacred by both Hindus and Buddhists, for whom the reopening of the flower in the morning represents rebirth. Because of the plant's sacred status, the seeds are also commonly strung and used as prayer beads.

It grows naturally and is productive under submerged conditions in humid subtropical and tropical climates, generally areas with annual lows of 7 to 25°C, annual highs of 19 to 35°C and where there is permanent surface water, such as a pond or lake.

New plants are usually started from seed or rhizome cuttings. The seed are placed in a shallow dish or pan, covered in loose earth and left submerged in shallow water, about 5 cm (2 in) in depth, in a lightly shaded area for them to germinate. However, plants started from seed do not come true-to-type, so cuttings are preferred when selected varieties are cultivated.

Sacred lotus can be grown in ponds or large water-holding containers. Best practice in ponds is to grow the plants in large, submerged containers or barricaded sections of the pond to control the spread of the rhizomes. The ideal water depth is 20 to 30 cms (8 to 11 ins). Containers or barricades are not used in commercial rhizome production.

Performs best on rich, well-manured loam and silt-loam soils of a moderately acid to neutral nature, generally with a pH of 5.5 to 7.5, and on sites with full to partial sun exposure. Heavy clays or pure sand soils are not suitable for good rhizome formation, foliage or flower development.

Rhizomes require six to nine months to mature, depending on the growing conditions. In commercial operations, yields of fresh rhizomes are in the range of 5,000 to 10,000 kgs per hectare (4,460 to 8,920 lbs per acre) per year, though yields of up to 40,000 kgs (35,687 lbs) have been reported in intensive growing systems.

Sacred lotus has a vigorous habit with creeping rhizomes that grow and spread quickly to crowd out other plants. It is listed as a weed in more than one reference publication and as a serious weed or invasive species in some areas. The seed can also contribute to the spread of the plant and are produced in protective seed-heads that can remain dormant for many years.

The seedpods contain small amounts of the alkaloid Nelumbine, which acts as a cardiac poison if ingested.