Spanish lime or Guinep is a Lychee (Litchi chinensis) relative originating in northern areas of South America. Nowadays, the tree is found throughout Central American and the Caribbean, including the Florida Keys at the southernmost tip of the United States.

It can grow into a large tree reaching up to 25 m (85 ft), though it is typically 9 to 18 m (30 to 60 ft) tall. It develops a stout trunk on open sites, sometimes with fluting in large trees, supporting a densely leafy rounded crown. The bark is grey and smooth.

The leaves are compound, consisting of four, sometimes six, green leaflets arranged in pairs along the length. They are briefly deciduous in areas with a pronounced dry season. Otherwise, they remain on the tree in all seasons and in a dense arrangement that casts a deep shade.

The flowers are small, green-white, sweetly fragrant and with male and female flowers on separate trees. However, some trees also have bisexual or perfect flowers mixed in. They bloom from spring to summer, coinciding with the transition from the dry to the rainy season in its native range, borne in finger-like clusters at the ends of the branches.

Fertilised flowers develop into small round fruit in clusters resembling a bunch of giant green grapes. The fruit ripen from mid-summer to early autumn with thin, leathery green skin enclosing translucent, jelly-like orange pulp around a large seed, though some fruit may be double-seeded. Fruit size varies with the variety and growing conditions, ranging from 2 to 4 cm (0.75 to 1.5 in)in diameter.

Spanish lime is cultivated primarily for its fruit. Still, its attractive form and dense, wide-spreading crown has also seen it planted as a shade tree in gardens in some areas.

The fruit are eaten fresh out-of-hand; the thin, leathery skin split with the teeth or fingernail and peeled to access the pulp, which is sucked away from the seed in the mouth. The jelly-like pulp has a pleasing sweet to sub-acid flavour, becoming slightly astringent close to the seed. Care is taken not to swallow the seed, which is large and may present a choking risk, particularly in small children. It is usually spat out after the pulp is sucked away.

The flowers are a major bee forage and nectar source in Jamaica, Cuba, the Dominican Republic and Venezuela, with short but intense nectar flows from older trees. The pure honey is quite dark and acidic but with a pleasing flavour.

The wood is a pale yellow to pale brown, finely grained and of medium weight, averaging about 790 kilograms per cubic meter (49 lbs per cubic ft). It has low natural resistance to rot, decay and wood-boring insects, which places it in the non-durable hardwood class. Though not ordinarily available, the larger logs can be sawn and used to make furniture and cabinets and the smaller roundwood pieces used for turnery and other woodcraft. 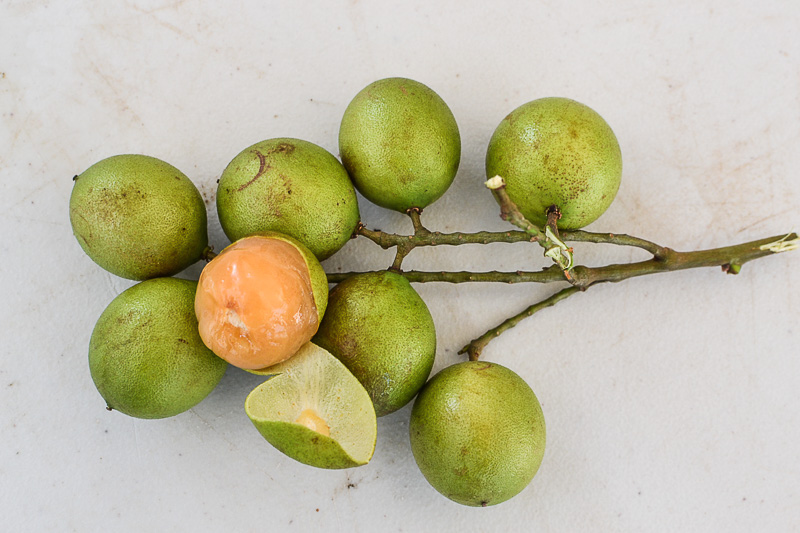 Spanish lime flowers and fruits naturally in moderately humid tropical monsoon and savanna climates, generally areas with annual lows of 19 to 25°C, annual highs of 27 to 35°C, annual rainfall of 700 to 2500 mm and a dry season of 3 to 7 months. Trees may fail to flower, or flower poorly in areas where the average low of the coldest month is below 12°C (54°F).

New plants are commonly started from seed. However, seedling trees do not start to bear fruit until they are around ten years old. In contrast, vegetatively reproduced trees start fruiting after four to five years. Grafting cuttings of selected cultivars onto common seedling rootstock has given good results, as has air-layering (circumposing) techniques.

Vegetative reproduction is also the only way to know which plant is female and male, as both are needed for good pollination and fruit production.

Performs best on free-draining clay, loam and sand soils of a moderately acid to alkaline nature, generally with a pH of 5.5 to 8.0, and on sites with full to partial sun exposure. It has good tolerance to drought and limestone soils.

Birds and bats disperse the seed in its native range, and it is listed as a weed in at least one reference publication. Still, there does not appear to be any record of it anywhere as a serious weed or invasive species.

The large oval seed presents a choking risk to young children, and some parents will request their child to chew the seed as a precaution when eating the fruit.